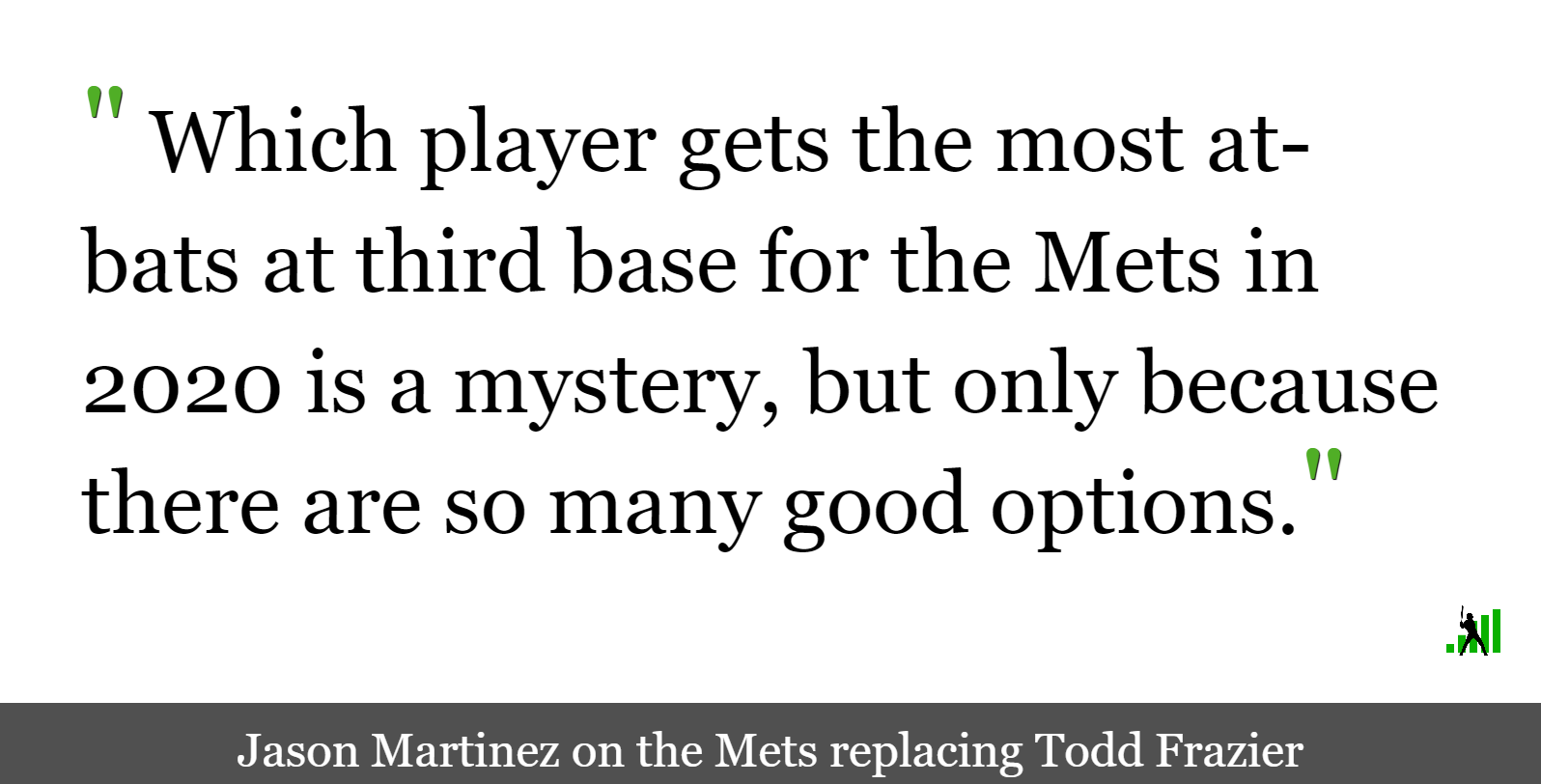 In part four of a six-part series — the AL East, AL Central, and AL West pieces have been published — I’ll be highlighting each team’s most notable free agents and how it could fill the resulting void on the roster. A player’s rank on our recently released Top 50 Free Agents list, along with Kiley McDaniel’s contract estimates from that exercise, are listed where relevant. In some cases, the team already has a capable replacement ready to step in. In others, it’s clear the team will either attempt to re-sign their player or look to the trade or free agent markets for help. The remaining cases are somewhere in between, with in-house candidates who might be the answer, but aren’t such obvious everyday players to keep the team from shopping around for better options.

Here’s a look at the National League East.

The Braves didn’t waste much time identifying Donaldson as their preferred third baseman for 2019 and inked him to a one-year, $23 million deal last November. A year later, Austin Riley is ready to step in at the hot corner while Donaldson, who will turn 34 next month, is expected to land a multi-year deal in the range of $20-$25 million per season.

As great a fit as he is in Atlanta, Donaldson will likely get better offers elsewhere with the Braves expected to prioritize starting pitching and catching. That doesn’t rule out a return, especially if the team can fill their biggest needs without breaking the bank.

Despite having one of the deepest and most talented group of pitching prospects in baseball heading into the 2019 season, only Mike Soroka was able to play a significant role in the team’s success while several others struggled at the big league level. The good news is that a prospect’s breakout season doesn’t always happen as a rookie — Max Fried’s breakout in 2019 came a year after exceeding rookie limits — and often happens once they’ve fallen a bit off the radar.

Among those who didn’t fare well, Touki Toussaint, Bryse Wilson, and Kyle Wright will each have to force their way into the team’s plans. Any contributions from the next wave of pitching talent, including Ian Anderson and Kyle Muller, would be a bonus in 2020. While it’s not out of the question for the Braves to hold a competition for one rotation spot and hope that the next great rookie pitcher emerges, it’s more likely that they’ll try to fill both of their current openings — Soroka, Fried, and Mike Foltynewicz should be penciled into spots — with more reliable options.

Tyler Flowers was already re-signed to a one-year deal, but McCann, the other half of the team’s catching duo, is hanging up his spikes after 15 years in the majors. The Braves aren’t quite ready to give the job to rookie Alex Jackson, so look for the team to target a veteran to share the load with Flowers in 2020.

While Isan Diaz was putting up huge numbers in Triple-A, Castro was serving as an underwhelming stopgap in the majors. By the time Diaz was finally called up to the big leagues in early August, Castro had a 65 wRC+ with nine homers in 458 plate appearances. It wouldn’t have been a surprise if the Marlins had just released him, but they stuck with the four-time All-Star, who would turn things around and post a 146 wRC+ with 13 homers over his final 218 plate appearances while spending most of his time at third base.

Castro’s strong finish and late-season display of position versatility should help him on the free agent market. The Marlins could still see the 29-year-old as a fit, though. They could use a second baseman who could shift to a utility role once they’re comfortable handing over the keys to Diaz, who showed that he wasn’t quite ready during his first major league stint.

The Mets traded for Marcus Stroman in July partly to help spark a late-season playoff run — they were 36-21 after the trade, although they failed to advance to the postseason — but it was also made in anticipation of Wheeler departing as a free agent.

Which player gets the most at-bats at third base for the Mets in 2020 is a mystery, but only because there are so many good options. Jeff McNeil only made 16 of his 123 starts at third base in 2019, but he could play there much more often if Robinson Cano and the outfielders can stay healthy. The same could be said for J.D. Davis, who is likely to spend more time at third base after playing mostly left field last season. Jed Lowrie, an All-Star with the A’s in 2018, is also back in the mix after missing most of the season due to injury.

Andrew McCutchen might not be ready for Opening Day as he recovers from knee surgery, and Odubel Herrera is a big question mark after having struggled through the first two months of the season before a suspension for violating the MLB-MLBPA joint domestic violence, sexual assault, and child abuse policy ensured he wouldn’t return in 2019. Still, the Phillies’ outfield isn’t likely to be a top priority this offseason.

Barring a trade, Jay Bruce can play left field until McCutchen is ready while Adam Haseley should push Herrera for playing time in center field. Dickerson, who was acquired in late July with Bruce out of action due to an oblique injury, would give the Phillies some stability, but there should be better opportunities available with teams that can give him at least semi-regular at-bats.

Both of these veteran left-handers can capably hold down the No. 5 rotation spot on many teams. The Phillies, however, likely have their sights set on a starting pitcher who can fill out one of the top two spots with Aaron Nola. At the least, they’d add a good mid-rotation starter and let Zach Eflin, Vince Velasquez, and several young pitchers battle it out for the last two spots.

Bringing back Strasburg, who opted out of the remaining four years and $100 million on his contract, is expected to be a top priority for the World Champions. If they are unable to retain the 31-year-old, they are still in relatively good shape with Max Scherzer, Patrick Corbin, and Anibal Sanchez leading the way. Ideally, they can add one more reliable starter to the mix with Erick Fedde, Joe Ross, and Austin Voth the leading candidates to compete for the fifth spot.

With openings at second and third base, the Nationals could turn to top prospect Carter Kieboom, a 22-year-old shortstop who made 41 starts at second base and nine starts at third base in the minors last season. Assuming that Kieboom is the leading candidate to play second base after posting a 123 wRC+ with 16 homers in 494 plate appearances for Triple-A Syracuse, that would leave the Nats with holes at the corner infield spots.

Rendon, like Strasburg, is expected to get a competitive offer to re-sign with the Nats. If he signs elsewhere, the next best available free agent third basemen would be Donaldson and Mike Moustakas. The trade market could include some big names, such as Kris Bryant and Jose Ramirez, but the Nats probably don’t have enough talent in their farm system to make a significant upgrade of that caliber.

Zimmerman, who debuted with the Nats as a 20-year-old in 2005, could return in a limited role as a pinch-hitter and platoon partner at first base. In that case, Mitch Moreland are Justin Smoak are free agents who could make sense as the team’s primary first baseman.

Hudson made just 33 appearances with the Nationals, including nine in the postseason, but he was, arguably, one of the biggest factors in the team’s championship run. Prior to his acquisition, the Nats were six games over .500 despite a very shaky bullpen. While the relief pitching wasn’t that much better throughout the remainder of the season, the 32-year-old Hudson was clearly their best reliever down the stretch — they won 36 of their final 54 regular season games — and until the final out of the World Series.

Despite a long history of injuries, Hudson has made at least 64 appearances in four of his last five seasons and has had over 70 in three of his last four. But the Nats can’t count on him being their savior again over the course of an entire season. While Hudson would certainly be an important piece, they are still multiple relievers away from solidifying their bullpen.

With a pair of young catchers, Raudy Read and Tres Barrera, already on the 40-man roster, the Nats must decide if they trust either enough to pair with Kurt Suzuki in 2020. Bringing Gomes back is a possibility, although the team could prefer to add a younger catcher who can take on a bigger share of starts than the 36-year-old Suzuki.