On the night of Feb. 5, 2019, Los Angeles Clippers forward Tobias Harris capped a 20-point comeback against the Hornets with a game-winning floater, keeping LA a game ahead of the Sacramento Kings for the West’s final playoff spot.

An hour later, the players were still on a high. Patrick Beverley led one group of players out to dinner, while others relaxed at the hotel. Harris retreated to his room to watch the Netflix true crime documentary series on Ted Bundy.

That’s when he got the message to meet Doc Rivers in his room. The coach had some news to deliver.

“It was at night, so it was like coming off a big win, and ‘Ooohhh, what’s going on now?’” Beverley remembers thinking.

In the wee hours of the morning, the Clippers completed a deal to send Harris to the Philadelphia 76ers, along with Boban Marjanovic and Mike Scott. In return, the Clippers received rookie Landry Shamet, an injured Wilson Chandler, an expendable Mike Muscala, and future draft pick compensation.

Once Harris, Scott, and Marjanovic were informed of the trade, they gathered with some of their soon-to-be former teammates in the hotel, including reserve guards Milos Teodosic, who was also on his way out, and Tyrone Wallace. They reminisced about their season and said goodbye to a team that had outperformed expectations.

At a glance, it appeared that the Clippers were executing a “special form of tanking,” to quote this website. No one expected the Clippers to emerge from the trade somehow even stronger.

On another team, in another situation, trading the leading scorer for a collection of unproven youngsters and future draft picks would have represented a pivot toward next season. But the 2018-19 Clippers were unique in a league that often treats building for the future and competing in the present as mutually exclusive. This was the second straight year LA traded its highest-profile player in the middle of the season. Last year, it was “Clipper for Life” Blake Griffin. This year, it was Harris, the centerpiece of the trade return for Griffin.

For the second straight year, the team stayed competitive in spite of their deal-making. They were 25-24 when they traded Griffin last year and finished 42-40. They were 30-25 when they dealt Harris this year and ultimately finished 48-34, lapping their crosstown rival Lakers in the process. The capper: a memorable first-round playoff series with Golden State that ended in defeat in six games, but not before two wins in Oakland, including a 31-point comeback in Game 2.

“Me and Lou [Williams], we talked about it — me and Lou talked about everything. We go out there, play as hard as we can and live with the results,” Beverley says. “We’ve been doing that ever since.

This is how the Clippers rejected the incentives to bottom out and created a culture that facilitates immediate success, no matter who was on the roster. 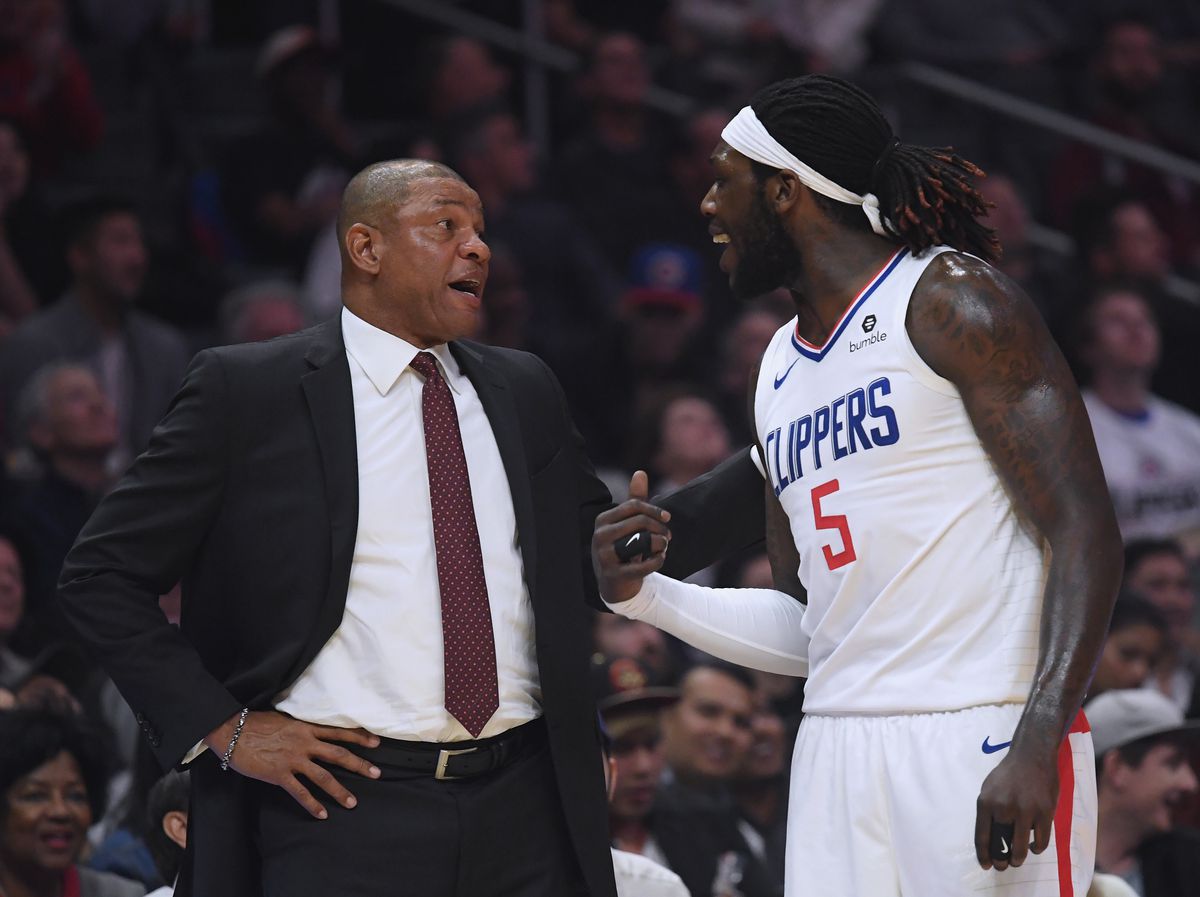 Doc Rivers has a go-to comparison for this Clippers group: The 1999-00 Orlando Magic, Rivers’ first team as a head coach. The Magic were projected to finish near the bottom of the Eastern Conference, having traded franchise player Anfernee Hardaway to the Suns in the offseason. In February, they dealt Chris Gatling and Tariq Abdul-Wahad, their second- and third-leading scorers, to Denver.

Led by Darrell Armstrong, Rivers’ unheralded group finished with a .500 record anyway, missing out on the postseason only after losing their final game. They ultimately showcased enough “heart and hustle,” Orlando’s marketing slogan that year, to attract Tracy McGrady, Grant Hill, and nearly Tim Duncan during the offseason.

“We were completely rebuilding. I think we made 120 transactions all year. And yet, we kept winning,” Rivers says. “What that did when free agency came is, guys saw that, and I think that they saw the way that we played. That was attractive.”

To follow that path, the Clippers have used owner Steve Ballmer’s deep pockets to fortify their front office, in the belief that stars will follow. The list of top executives who joined President of Basketball Operations Lawrence Frank in the summer of 2017 includes the legendary Jerry West, former OKC Thunder assistant GM Michael Winger, and longtime Cleveland Cavaliers executive Trent Redden.

The team continued to beef up its basketball operations this season. After LA had 11 players miss 264 total games due to injury, the fifth-most in the NBA, in 2017-18, the team expanded its performance and training staff.

“I don’t know them all,” Rivers says, laughing. “We have so many people.”

Nevertheless, there was a brief moment when trading Harris threatened to undermine the players’ trust in that organizational infrastructure. The day after Harris was traded, Beverley quizzed management on the decision. He wanted answers. He knew that the Clippers would retain their first-round pick if they missed the playoffs.

The message he received back clear: Trading Harris wasn’t throwing in the towel.

“It was solid,” Beverley says about the meeting. “I just asked questions: where this thing was going, are we tanking? They said ‘no,’ and they were right.”

“I just asked questions: where this thing was going, are we tanking? They said ‘no,’ and they were right.” -Patrick Beverley

“Doc sat us down and told us the playoffs were still the goal,” Wallace remembers.

The front office proved it by upgrading the team’s depth the next day, acquiring Ivica Zubac from the Lakers, and JaMychal Green and Garrett Temple from Memphis. The three of them immediately entered the rotation, with Zubac starting at center and Green and Temple joining Williams and Montrezl Harrell on LA’s vaunted bench unit. Along with Shamet, those additions more than made up for Harris’ departure.

But more than savvy additions, the Clippers exceeded expectations because they had already acquired and nurtured a group of self-starters like Beverley, Harrell, and Williams. Even if management hadn’t been so forthright with Beverley and company, any player reservations would have faded between the lines.

No one on the Clippers was a superstar, but as Rivers likes to say, everyone had a chance to be a star in their role. That includes the head coach, who ceded the President of Basketball Operations title and turned in one of his finest performances this season. The Clippers’ attitude is crystalized by Williams, who could easily walk into Rivers’ office and ask to start every game, but instead came off the bench and devastated opposing second units with his pick-and-roll chemistry with Harrell. His reward: a likely third Sixth Man of the Year award.

The Clippers bought in early, embracing their status as underdogs in their city and in the league. They played hard, and they play together. The entire roster has been turned over since the summer of 2017, but that underdog mentality persisted. 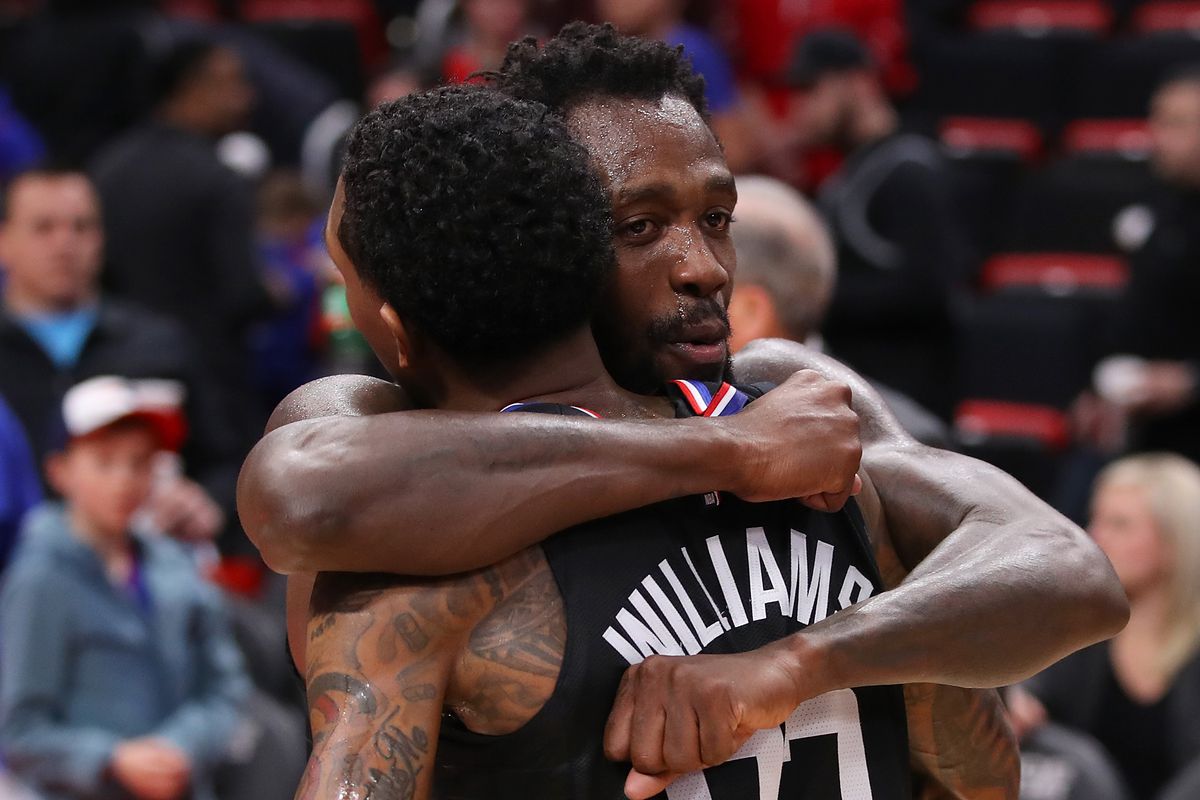 Rivers set the tone, but the combination of Beverley and Williams gave L.A. its edge. Beverley, a fiery competitor known for his defensive intensity, is an upcoming free agent. Williams, a laid-back, sweet scorer, has a tradable contract on a team looking to maximize cap space. Yet both rejected conversations about the offseason, instead focusing solely on the group they took the court with every day.

“They both do a great job of coaching, Pat and Lou,” Rivers says. “Pat does it in his way, which is pretty obvious how he does it, by screaming and yelling, and Lou puts his arms around you and takes you over to the side and starts everything with ‘hey young fella, let me tell you’ in his calm voice. It works for both, fire and ice.”

They became mentors for the team’s under-22 players, three of whom started. Williams in particular took Shamet under his wing, and both Williams and Beverley were consistently in rookie point guard Shai Gilgeous-Alexander’s ear.

“[Lou] doesn’t treat anybody like he’s above them,” Shamet says. “He’s just good with kind of that camaraderie, just talking to people, keeping guys loose when they have to be. Then also he’s good at flipping the switch there and reeling guys in, locking us in if we need to. He’s been around the block, he knows what he’s doing, he’s just a good presence in here.”

They also rubbed off on each other. Beverley made 41 percent of his three-pointers since the Harris trade, while Williams gave more effort defensively and even displayed some of Beverley’s emotion. In a late-season game against Brooklyn, Williams hit a game-winning 30-foot three-pointer, the first literal buzzer-beater of his career. Rather than brush it off like he did with a game-winner against Milwaukee earlier in the year, he tried to celebrate to avoid getting mocked by his teammates, borrowing a move from Harrell and throwing his arms up in the air, wiggling his fingers to beg the crowd for more.

“My teammates say I don’t know how to celebrate, so I’ve been working on my stuff,” Williams says. “They say I don’t show enough emotion.”

His teammates teased him mercilessly anyway. Harrell rated Williams’ gesture a 3 out of 10 and Beverley calling it the “weakest celebration” he’d seen. To prove a point, Beverley made an elaborate show of throwing dice after hitting a dagger floater against Indiana in the next game.

By shutting out the outside noise, the Clippers all became the best versions of themselves and even grew in the process. The team achieved more success than it imagined, owning the fifth-best record in the league since the trade deadline passed and outlasting several other more hyped teams in the playoffs.

There is a ceiling on what the Clippers could achieve with their current talent. No player on the roster has ever been an All-Star, so they weren’t expecting to compete for a title with this group as presently constructed.

But they did expect to build a foundation for a team that could achieve those heights, prioritizing their culture over individuals and the group over the pieces. In a league increasingly plagued by player unrest and instability, the Clippers found a way to create solidarity up and down the roster. That’s why they’ve become a compelling free agent destination heading into the summer of 2019.

“At the end of the day, you have to teach team, that’s what’s going to win,” Rivers says. “The other stuff doesn’t work. Our guys do that.”