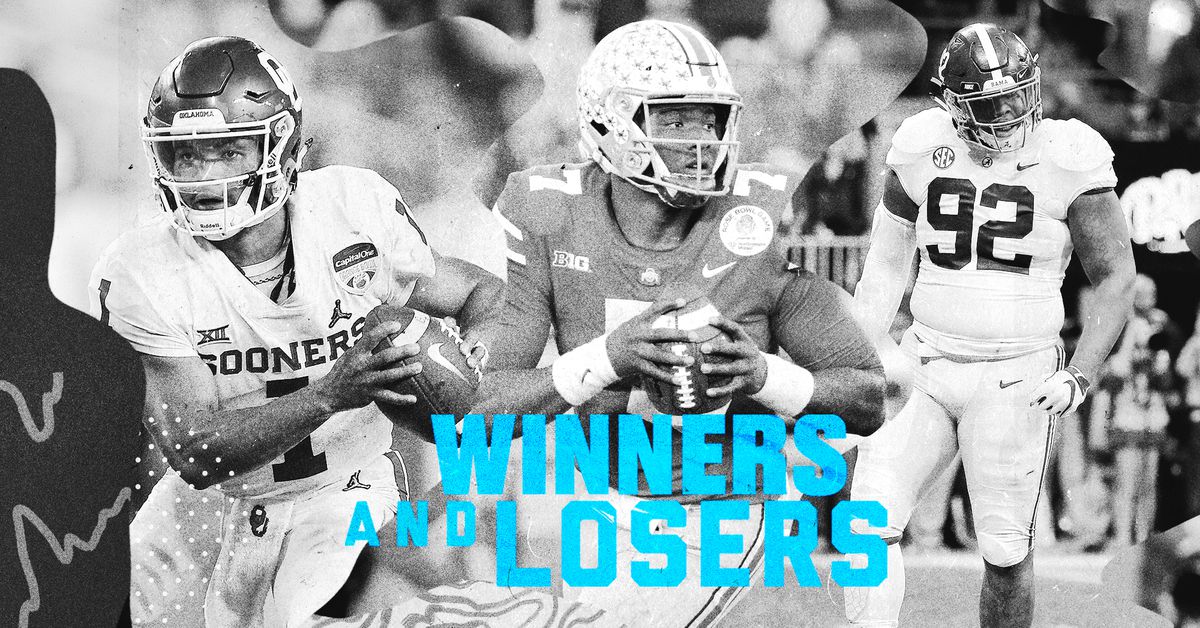 The first round of this NFL Draft is over. It is several years too soon to know which teams made out well and which failed miserably. But this is America, so we’re not going to wait for players’ careers to unfold before passing judgments on them and the teams that picked them. The following is a non-exhaustive collection of winners and non-winners.

The most obvious home run of Thursday night was Jacksonville snagging Kentucky edge rusher Josh Allen at No. 7 overall. Allen spent much of the draft cycle as a projected top-three pick, with good reason. He’s always been a brilliant pass-rusher, but in 2018 he morphed into the best and most well-rounded defensive force in college football, period. He’s so good that even if the Jaguars were trying to ruin him, they couldn’t.

(This Josh Allen is known by college football fans as Good Josh Allen, not to be confused with the Bad Josh Allen who went seventh overall last year to the Bills.)

Hoo boy. Hoooooooooo boy. The Giants spent the sixth pick on Duke quarterback Daniel Jones, in what can only be described as one of the biggest reaches in draft history. There is virtually nothing in Jones’ profile that suggests he should have been close to a first-round pick. His college stats were mediocre to bad, and he didn’t consistently improve.

He’s 6’5, but he doesn’t have a big arm and doesn’t fit any of the usual prototypes for underachieving college QBs who wind up getting picked highly in the NFL. The only thing that appears unique about Jones is that his Duke head coach was David Cutcliffe, who previously coached both Peyton and Eli Manning. Really, that’s the whole thing.

There’s an outside chance Jones is good, but it’s not likely that he can even be average, based on the statistical history of QBs like him. Picking him is made even worse by the fact that a division rival (Washington) was then able to pick an ultra-productive QB (Dwayne Haskins) instead of Jones.

The G-Men took Clemson nose tackle Dexter Lawrence 17th overall, using a pick they got from the Browns for Odell Beckham Jr. Lawrence is a fine player, but when you put him in context of the organization’s weird last year, his selection looks stupid:

They also traded up for the No. 30 pick, giving up the 37th, 132, and 142nd picks in the draft to do it. They spent the 30th pick on Georgia cornerback Deandre Baker, which seems fine.

Still! Either GM Dave Gettleman is playing the world’s most sophisticated game of three-dimensional chess, or he’s bad at his job and shouldn’t be running an NFL team.

Congratulations to Daniel Snyder’s franchise on landing Ohio State’s Dwayne Haskins at No. 15. Haskins is imperfect, but he has the makings of a franchise QB and was downright great during his lone year starting for the Buckeyes.

They also traded up to draft Mississippi State linebacker/end Montez Sweat 26th overall, and Sweat is monstrously good. It was an uncharacteristically savvy night for this team.

Deepest sympathies to this young man on having to play for Daniel Snyder’s franchise, which does not get off the hook for having a good Thursday.

The Bills’ Allen pick in 2018 was confounding, but their Ed Oliver pick at No. 9 in 2019 seems great to me. Oliver is a do-it-all defensive lineman who plays the run voraciously and could yet develop into a wonderful interior pass-rusher. Oliver’s combine and pro day stats are a mix of Aaron Donald, Arian Foster, Ndamukong Suh, Le’Veon Bell, Jason Pierre-Paul, Von Miller, Amari Cooper, and J.J. Watt. He’d have been a perfectly fine No. 1 overall pick.

The Cardinals, as expected, took Oklahoma megastar QB Kyler Murray with the top pick. That leaves Rosen, the No. 10 overall pick in 2018, on the outs sooner or later.

It’s highly unusual for a team to punt on a top-10 QB pick after just one season, especially a season in which that QB had to play behind a sieve of an offensive line and throw to a limited group of receivers. Those circumstances weren’t Rosen’s fault, nor was it his fault that the Cardinals fired the coach who drafted him and replaced him with a fired air raid coach from Texas Tech who just so happens to have been enamored with Murray’s game for a long time. Murray’s the Cardinals’ guy now, which means Rosen can’t be. That the Cardinals haven’t gotten a good enough trade offer for him yet is also discouraging.

Someone, please trade for Rosen and make him your future QB. He might be good!

I am a big fan of Clemson defensive lineman Christian Wilkins, who’s both a mauler and one of the most fun personalities in the draft. They got him at No. 13, which is good value.

The Tigers are college football’s reigning national champions, having drubbed Alabama by four touchdowns a few months ago. Now, three-quarters of their death squad of a defensive line have gone in the top 17 picks of the draft: Clelin Ferrell fourth to the Raiders, Wilkins 13th to the Dolphins, and Lawrence 17th to the Giants. That’s a hell of a feat, given:

And it marks the first time in NFL history a school has had three defensive linemen selected in the first round of a single draft. (Of note: NC State had three in 2006, though Manny Lawson’s pick was officially turned in as a linebacker) https://t.co/UyL5lOHCbd

They got Alabama defensive tackle Quinnen Williams at No. 3. That’s a strong “don’t overthink it” pick. There’s almost no way Williams is not a star.

The NFL has shifted just in the last few years toward smaller, faster inside linebackers who bear little resemblance to the Ray Lewises and Brian Urlachers of the 2000s. With the Buccaneers getting LSU’s Devin White at No. 5 and the Steelers trading up to get Michigan’s Devin Bush at No. 10, that trend has never been more prominent. White and Bush are one of the highest-drafted inside backer tandems ever, and they’ll make their defenses a lot better by playing sideline-to-sideline and helping out in the passing game.

As expected, just one, Alabama’s Josh Jacobs, went in the first round. One or zero is likely to get picked in the second round. The NFL’s devaluation of running backs has been underway for some time, but this, too, has never been on display more. If you’re a high school football player with someday NFL dreams, consider moving to receiver or basically anywhere else.

Cornerbacks didn’t have a good night, either, with none going until Baker at 30th to the Giants. But that position hasn’t been under attack for years, and a number of good corners are going to come off the board in the second round, so the CBs get a pass here.

The Ole Miss receiver who wowed everyone with his elite measureables (in everything except agility) entered the draft with two broad possible outcomes: he’d go really early because he’s such an impressive workout warrior on the whole, or he’d fall a ways because he tested badly in direction-change drills and didn’t produce much in Oxford. The latter happened. Metcalf didn’t get picked, nor did his more productive college tandem-mate, A.J. Brown. Both of them are interesting prospects in their own ways.