In 2000, the Clay Mathematics Institute of Cambridge, Massachusetts offered a prize of $1 million dollars to anyone who could solve one of seven “unsolvable math problems”. 19 years later, only one of the problems has been solved. Just down the road from Cambridge in Boston, another set of minds has set to work trying to solve a problem that has vexed NBA teams for the entirety of the 2018-19 season: How do you stop, or even slow down, Giannis Antetokounmpo?

The Boston Celtics are underdogs in their second round series against the upstart Milwaukee Bucks for a handful of reasons. Milwaukee has made a massive upgrade on the sidelines with the hire of Mike Budenholzer. He’s brought the Bucks new offensive and defensive systems that work in the modern NBA. General Manager Jon Horst has overhauled the roster to bring in players that fit with Budenholzer system. Khris Middleton has blossomed from one of the most underrated players in the NBA to a legitimate All-Star. Eric Bledsoe stayed healthy and turned in the best season of his career. Yet, as great as all those things are, it’s really all about Giannis.

Antetokounmpo had the best season of his six-year career. He averaged career-highs nearly across the board with 27.7 points on 57.8 shooting from the field, 12.5 rebounds and 5.9 assists per game. All of those numbers would have been higher, except Milwaukee was so dominant that Antetokounmpo played just 32.8 minutes per game, which is the lowest number he’s had over the last four seasons.

It’s not just the numbers, but also the style of play, that makes Antetokounmpo an almost impossible covers. He’s so big, strong and long that even with defenders sagging off him, he gets to the rim with ease. An absurd 57.3% of Antetokounmpo’s shots come at the rim. On those attempts, he makes 76.9%. For reference: that percentage is better than all but two of Shaquille O’Neal’s seasons.

CelticsBlog spoke to a handful of NBA coaches (both head coaches and assistants) on how to guard Antetokounmpo. One Eastern Conference coach said “You have to keep size on him, otherwise it’s too easy for him at the rim. But that size better be able to move, or you’re in trouble.” Another Eastern Conference coach said “We believe in playing him with quickness. No one is big enough to bother him at the rim anyway, so you just have to stay in front of him. He hates guys getting up underneath him, so you’re best bet is to make him uncomfortable, even if that means guarding him with a smaller guy.”

A Western Conference coach told us “Just foul him. Repeatedly. It’s the playoffs. The refs won’t call all of them. Ideally, you hit him and put him on the floor a few times. Nothing dirty, but good, hard playoff fouls. Make him think about it. When you do get called, you have to make sure he earns those freebies.” Another Western Conference coach said “Maybe you get that one time a month when he decides to be a shooter. That would be a lucky thing. I’m glad we only have to do it twice a year.”

One thing all the coaches we spoke with agreed on was some version of what the first Eastern Conference coach opined: “Just try not to foul. He’s like a 7-foot (James) Harden now. He’ll foul out your whole roster and take 20 free throws doing it. You’ll probably turn a bunch of layups and dunks into And-1s too.”

So, defend Giannis with size. But that size needs to be quick. Or go small and get underneath him. Don’t foul. But if you do foul, make it hard. Or just hope he decides to shoot jumpers. Getting a sense of why this is such an issue?

Finally, a Central Division coach, who goes against Antetokounmpo more than anyone said “Boston has (Al) Horford. He needs to be the main guy. Beyond that, mix it up. I’d change it possession to possession. Play him straight up sometimes, send doubles and traps other times. Just try to keep him off-balance as much as possible. The Celtics have defenders who are good enough and smart enough to pull that off without getting killed off the ball.” 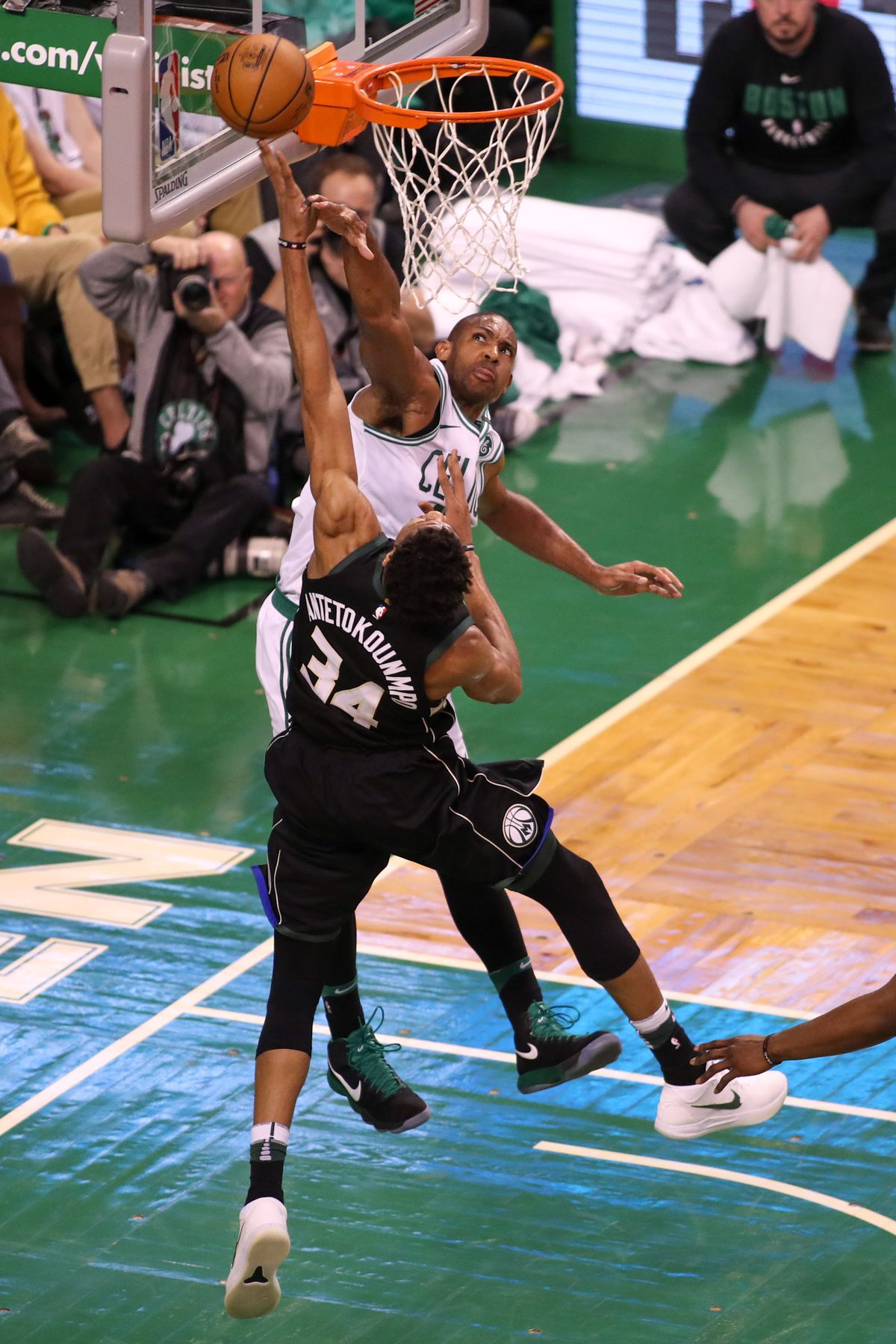 Let’s start with Al Horford. Conventional wisdom says he may not start the game guarding Antetokounmpo, but Horford will have him at the game’s most critical junctures. In two games this regular season, Horford guarded Antetokounmpo for 41 possessions, per NBA.com tracking date via Second Spectrum. This means that Horford was the primary defender on Antetokounmpo for the majority of the length of those 41 plays. On those possessions, Antetokounmpo scored 16 points on 7-of-14 shooting and was fouled while shooting once. He also had three assists, four turnovers and had his shot blocked four times. All of those numbers are favorable for Boston compared to Antetokounmpo’s regular season success. Overall, the Bucks scored just 40 points on those 41 plays, which is below their team average.

Building off that, over seven games in last year’s playoffs, Horford guarded Antetokounmpo for 161 possessions. Antetokounmpo scored 62 points on 24-of-44 shooting was fouled while shooting eight times. He had eight assists, nine turnovers and had his shot blocked three times, including once by Horford. Again, Horford was pretty successful against Antetokounmpo. 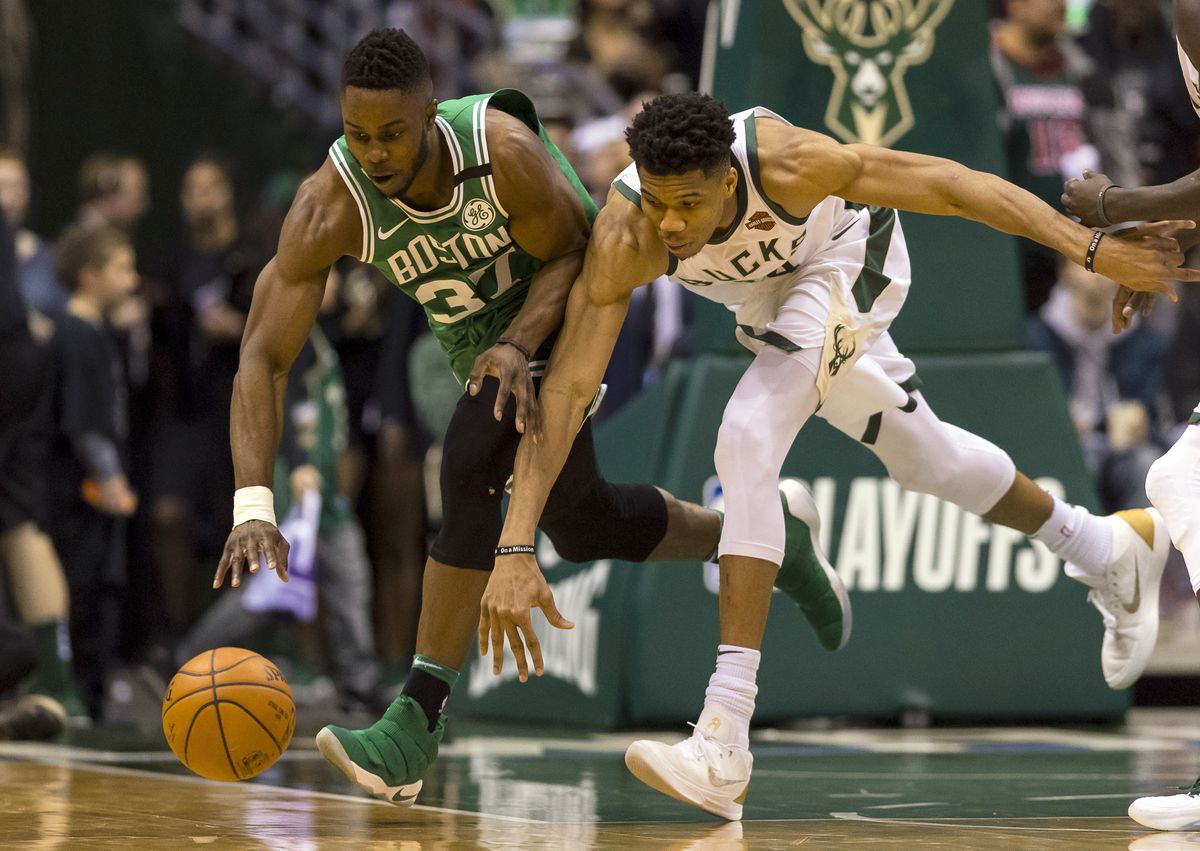 But Horford can’t do it himself. The numbers tell us the second-most likely defender against Antetokounmpo was Semi Ojeleye. Ojeleye drew Giannis 40 times in three games during the regular season. Antetokounmpo hit 7-of-10 shots in those games for 19 points, while drawing three shooting fouls. The Bucks scored 42 points on the 40 plays where Ojeleye guarded Antetokounmpo, again a tic below their average.

In last year’s playoff series, Ojeleye saw Antetokounmpo for 142 possessions over six games. He was wildly effective, as Giannis scored just 38 points on 17-of-33 shooting, while drawing just six fouls. As a team, Milwaukee scored 150 points on those possessions.

Those numbers seem to suggest that Ojeleye will likely be unearthed as the ninth man in the rotation, and could even start games if Boston downsizes and pulls Aron Baynes from the starting lineup. Being typically coy, Brad Stevens was asked about Ojeleye playing in this series and responded with “We’ll see”.

Another oft-mentioned option for defending Antetokounmpo is Jaylen Brown. As one of the Eastern Conference coaches suggested, this is putting a smaller, but quicker, defender on the Bucks star. Brown only saw 19 possessions in two games on Giannis, but the numbers suggest it did bother Antetokounmpo. He only shot the ball only three times in those possessions. He did pick up five assists, but that’s the epitome of forcing others to beat you. 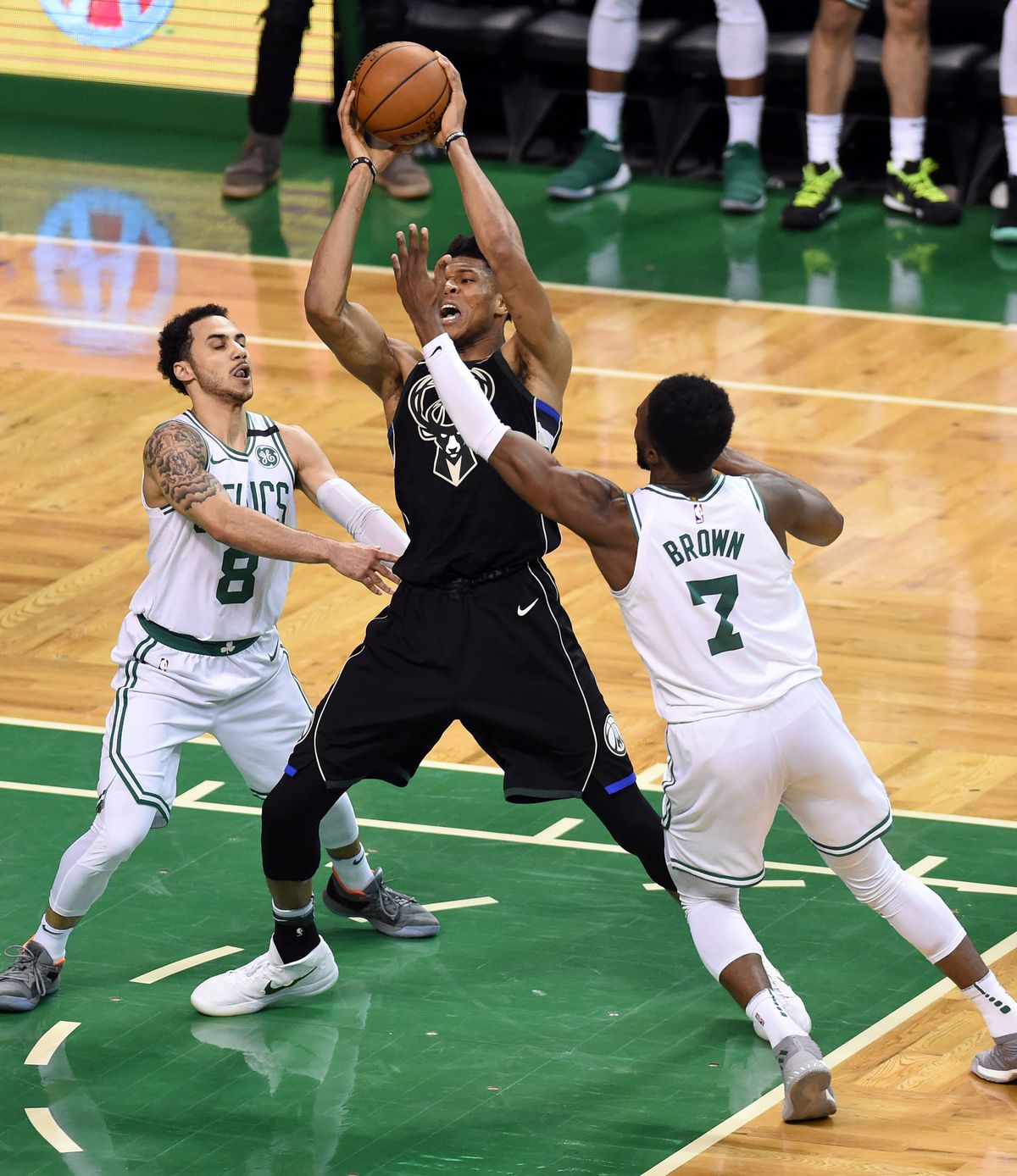 It was a similar story during the 2018 first round series for Brown guarding Antetokounmpo. He had 31 possessions in seven games. On those 31 plays, Antetokounmpo shot just twice.

The numbers are similar whenever Boston has guarded Antetokounmpo with a smaller player, be it Brown, Jayson Tatum, Gordon Hayward or Marcus Smart (who is expected to miss at least the first part of the series). In this regular season, that non-Brown trio combined for 63 possessions over the three game series. Antetokounmpo shot it on only 17 of those plays, while drawing five shooting fouls. He was 10-of-17 shooting vs those three, but, again, Boston mostly forced others to beat him. The 2018 playoff numbers tell a similar story for Tatum and Smart as Giannis defenders, as Hayward was out for that series. 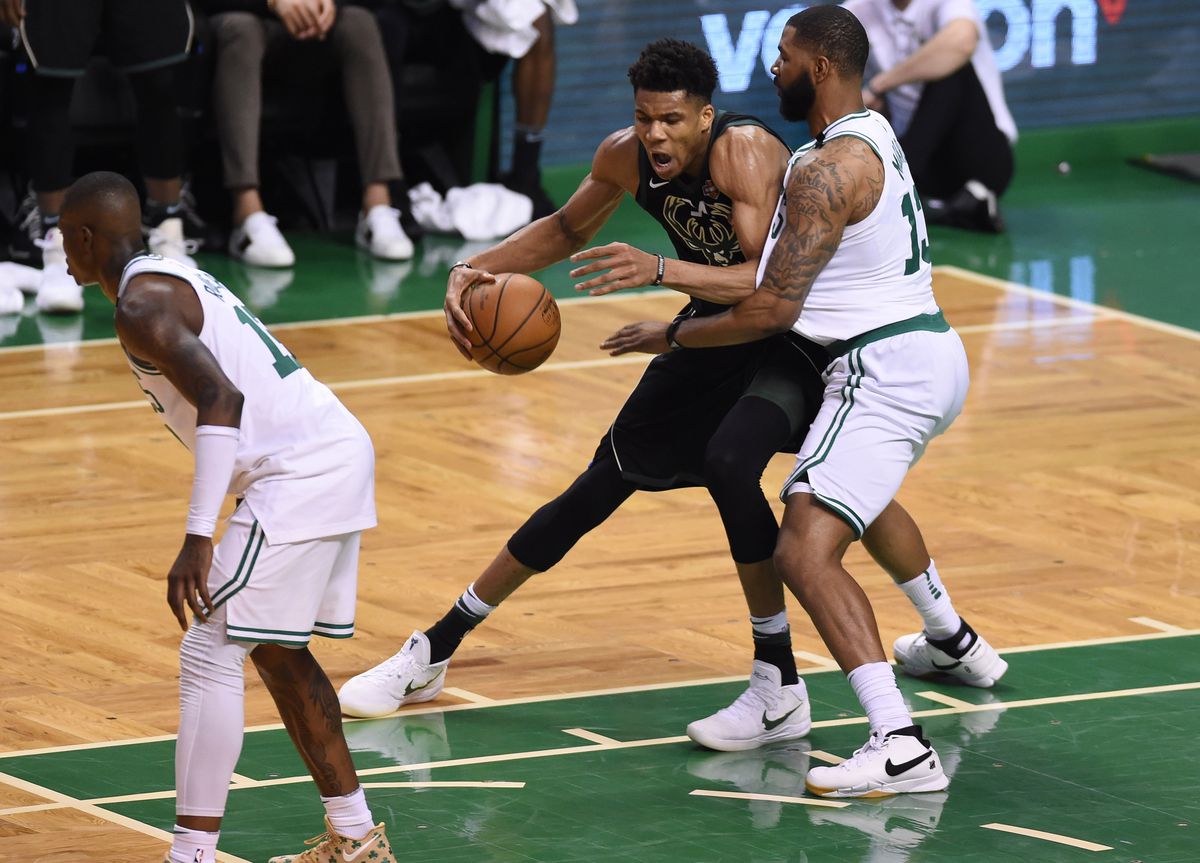 One matchup that maybe should be avoided is Marcus Morris defending Antetokounmpo. In nine combined games over last year and this year, Morris is the third-most used defender behind Horford and Ojeleye at 120 possessions. Antetokounmpo has 47 points on those plays on 15-of-27 shooting with 8 drawn fouls. While none of the Morris numbers are bad, Boston simply has better options.

So, where does this leave the Celtics with the best approach to handling Milwaukee’s superstar? Let’s go back to the Central Division coach. Let Horford handle the main minutes, but mix it up. Ojeleye will get his chances, but it’s a good idea to let the smaller defenders take their turns too. And throw some well-timed doubles and traps at him on occasion too. Dig down from the perimeter as he goes to his spin-moves in the paint. And absolutely let him take all the three-pointers he wants. That’s the best case scenario. Again, the idea is to keep Antetokounmpo thinking about the defense, as opposed to just playing against the same coverages every trip.

Mostly, Antetokounmpo is going to get his. He’s too good not to. But the idea is to make him work, and to try to do it without fouling. But if Boston can stay locked on the other players on the floor for the Bucks, while making Antetokounmpo a passer on some plays, they’ll increase their chances to pull off the upset. As the numbers tell us, it’s going to take everyone. The Celtics were on the same page and gave great effort against the Indiana Pacers in the first round. They’ll need that and more against the NBA’s best team in the regular season and one of the league’s best players.