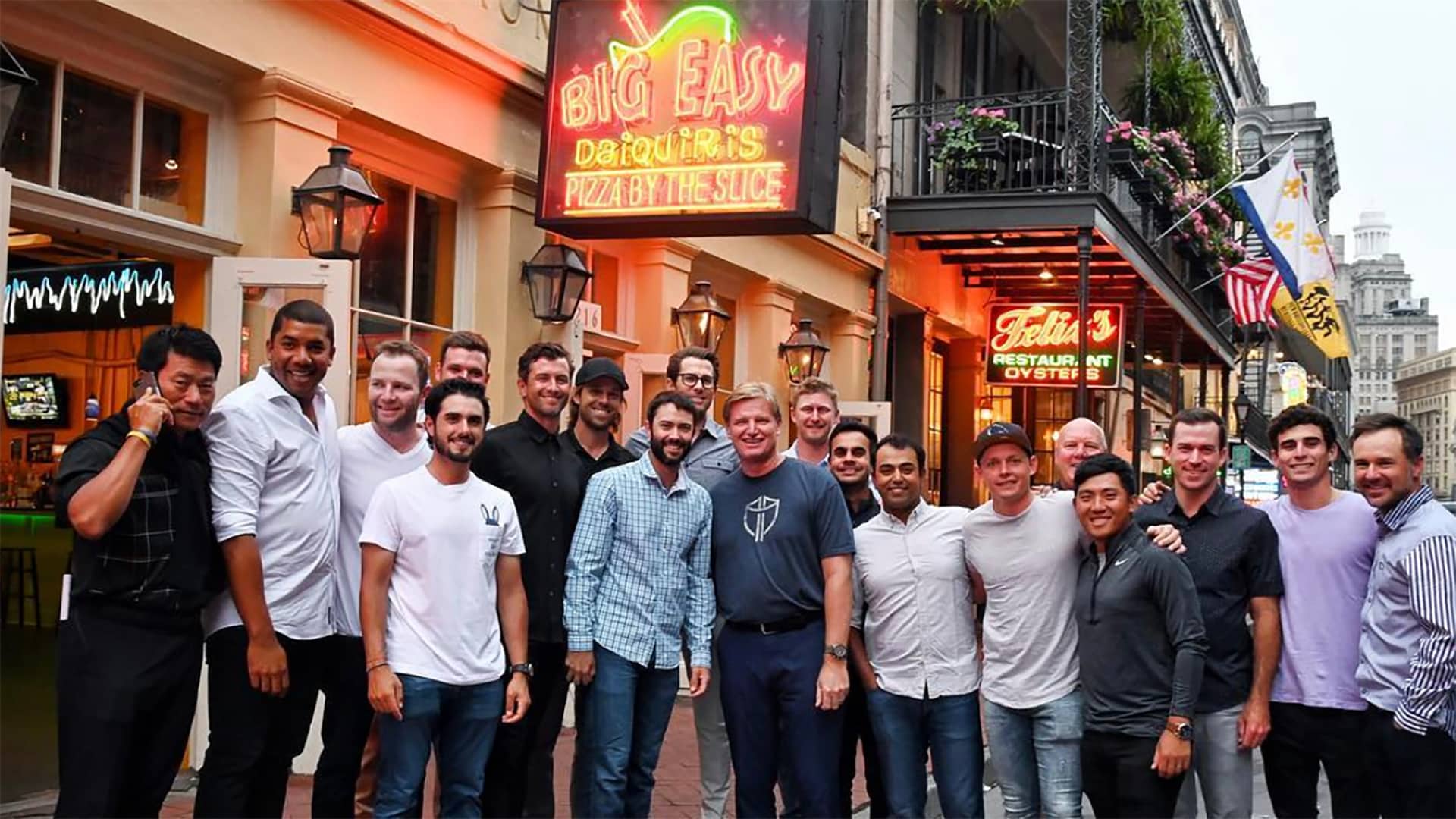 “We were sitting around with people from Latin America and Asia,” Els said, “and you talk about what’s going on in everybody’s lives. That’s how you learn.”

Els is looking to acquire valuable information this week at the Zurich Classic. He’ll tee it up with Immelman in the team event at TPC Louisiana, but his more important task will be watching how his potential Cuppers perform together.

Five of the top eight players on the International points list are in the Zurich field, including Jason Day, who will team with Scott. There are 11 total parings that feature two Cup-eligible players, some of whom have little experience playing team events together – or team events in general.

“A team environment is very difficult for guys who play an individual sport, and to be able to do that in a two-year span and getting new blood in every two years is very difficult to gel those guys together,” Day said. “But this is a good opportunity this week to be able to get that and gel those guys together and see what potential options we have in regard to teams.”

Els has been part of every Presidents Cup since 1996. He was a key contributor in the International victory in 1998. He went toe-to-toe with Tiger Woods in a playoff before the Cup was shared in 2003.

Mostly, though, he’s been on the losing end of what has quickly become a lopsided affair, one that the U.S. leads 10-1-1. The Internationals’ lone victory came more than 20 years ago, in 1998 at Royal Melbourne (site of the 2019 matches), and the past five Cups have been decided by a combined 20 points. In 2017, the U.S. team was a single point away from ending things a day early at Liberty National before winning 19-11.

If Els has noticed anything over the years, it’s that the American teams always seemed to be more comfortable with each other coming into the biennial matches. Surely the U.S. benefits from being able to play a team event every year and the Internationals are faced with blending together a more diverse group, but Els still sees room for the Internationals to improve their team camaraderie.

“Normally what we used to do in the past is try and get together the Sunday or the Monday of the Presidents Cup, and by Friday, Saturday, Sunday, we’ve really bonded. Every single time I’ve played a Presidents Cup we were like really a team by the weekend,” Els said. “We want to try and be a team come Sunday night before the event starts.”

With this year’s International squad potentially including as many as nine or 10 different countries, that goal becomes tougher. There’s no scientific formula for bringing different cultures, religions and personalities together.

“But I think we’ve got to find a way to make that diversity our strength,” Immelman said. “As Ernie touched on, the more time we can get to know each other…”

Which makes weeks like Zurich so important. Scott had never played TPC Louisiana in previous seasons, but the eight-time Presidents Cup player understands the value of this Big Easy bonding opportunity. (The players are also staying in the same hotel this week.)

“I’ve sat through a lot of Presidents Cup beatdowns over the years, and I’ve kind of had enough of it, so I’m prepared to do whatever it takes – whatever Ernie thinks it takes – to kind of change the culture in our team,” Scott said. “But it’s not just about coming here at Zurich this week and seeing some pairings and getting the team to spend a little bit of extra [time together]. I think it’s about starting to grow a culture amongst the international players and showing everyone who’s coming up the importance of this tournament … and how much we can all care about this.”

Els has invested loads of time and energy into closing the Presidents Cup floodgates for his side. He’s working tirelessly trying to build and prepare his team, but he’s also influenced several important changes to the Cup format that could prove beneficial to the Internationals.

Two Cups after the point total was reduced from 34 to 30, the 2019 Presidents Cup will feature a change in the required number of matches that a player must play before singles from two to just one.

The selection process has also been tweaked, as the points cycle shrinks from two years to one and the number of captain’s picks grows from two to four.

“It’s a huge, huge difference for us,” Els said. “Much more beneficial for us as a team.”

With the Presidents Cup more than seven months away, those picks are far from clear. But Els has already started to see some new faces grab his attention. South African Justin Harding, who has played with Els a couple of times, tied for 12th at the Masters. Mexico’s Abraham Ancer has also contended on the biggest stages. And Taiwan’s C.T. Pan picked up his first PGA Tour victory just last week at Harbour Town.

And there’s a chance someone else steps up this week at TPC Louisiana.

“He’s got some tough decision to make,” Harding said. “It’s probably tougher than trying to figure out a Ryder Cup side. I wouldn’t want to be him because naturally there are going to be some guys who are disappointed.”

Few, if any, will likely be dissatisfied with Els’ effort as captain.

“He’s already taken on a lot in trying to right the ship for the Internationals,” Scott said, “and I think we’re all fully embracing it.”

Added Els, with a smile: “There is something different going on. Let me put it that way.”

Whether that produces a different result come December, though, remains to be seen. If it does, you can bet there will be more team dinners in the future, only with a few more stories to tell and a cup to drink out of.