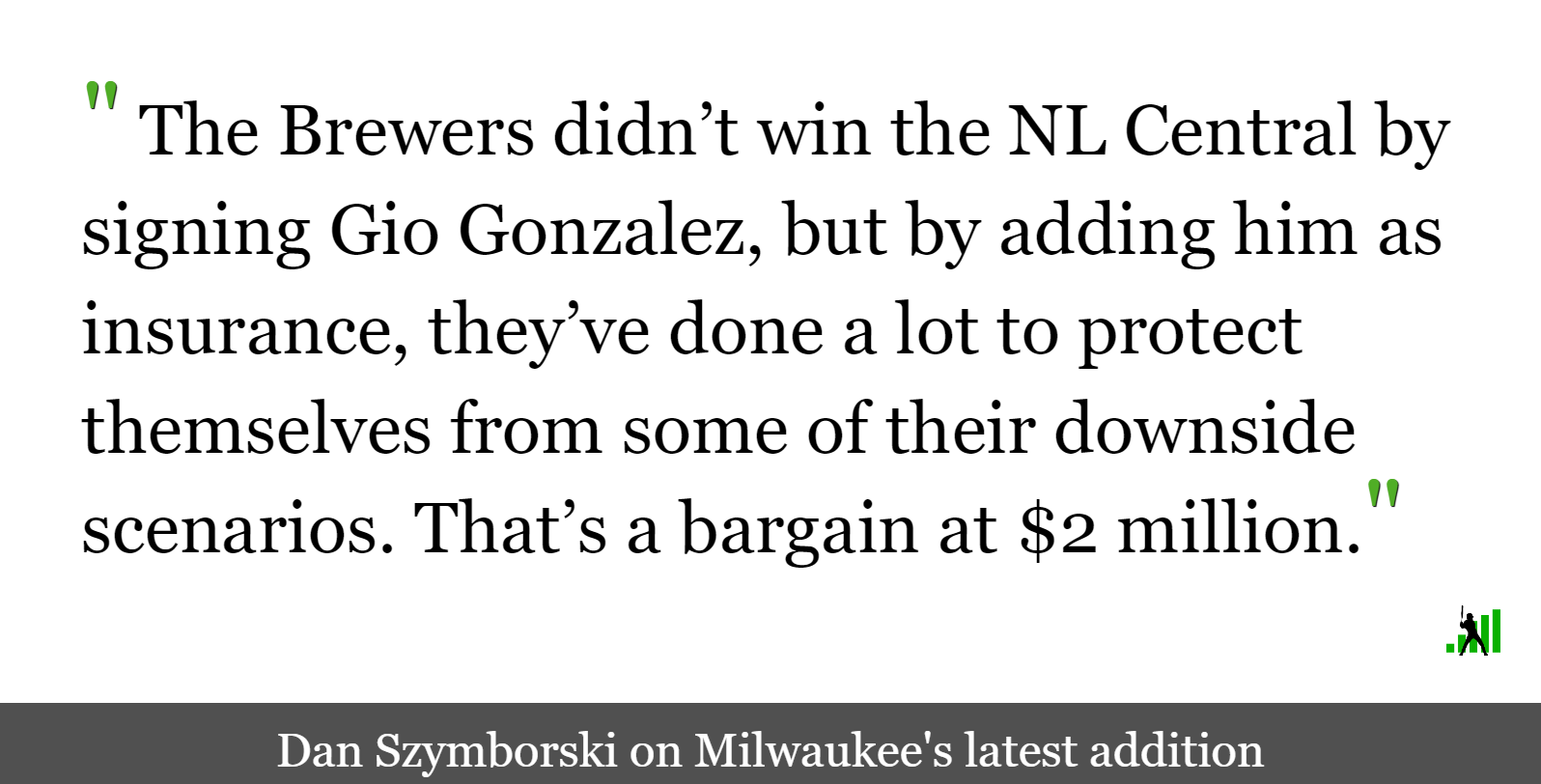 The Milwaukee Brewers signed a famous lefty starting pitcher out of free agency Wednesday, bolstering the back of the rotation. No, not that famous lefty starting pitcher, but a still quite respectable one in Gio Gonzalez, most recently biding his time with the Scranton/Wilkes-Barre Rail Raiders. In MLB terms, Gonzalez’s contract with the team is barely even a wallet-opener at one-year, $2 million with performance incentives.

Milwaukee’s rotation necessitated another arm after the early season struggles of Corbin Burnes. Burnes struggled to hit locations with his hard stuff, resulting in a slugging percentage over 1.000 against his fastball and a total of 11 home runs allowed in 17 2/3 innings. That’s a 58% home run to fly ball ratio! Gonzalez was brought in as an emergency option for the Yankees, and with the team’s injury emergencies largely being hitters, they never called up Gio and he exercised his out clause.

The Brewers and Gonzalez have a recent history, one that went swimmingly after the late August trade with the Washington Nationals. In 2018, Milwaukee was generally content to let Gonzalez go through five solid innings and then go to the bullpen, something that worked out well, at least during the regular season (3-0, 2.13 ERA/3.63 FIP in five starts). ZiPS projects 1.0 WAR for Gonzalez, assuming 100 innings for the rest of the season, which is comparable to the team’s other options. There’s a catch of course, in that the other options aren’t actually available at this moment; Burnes shouldn’t be working out his problems in a pennant race and Jimmy Nelson and Freddy Peralta haven’t yet returned from injury, even though they’ve made progress. Gonzalez doesn’t really add wins to the standings directly so much as serving as inexpensive insurance for other pitchers.

Gonzalez joining the Brewers is only a bit of a surprise in that they weren’t actually the team most in need of Gonzalez’s services. The buzz has been that about a third of baseball was interested in Gio, but why didn’t a team more in need blow away a measly one-year, $2 million option. After all, if you’re in desperate straits and you’re not going after Dallas Keuchel, where else are you going to get viable a starting pitcher outside of the system in late April? It’s not as if the Giants are begging (yet) to trade Madison Bumgarner.

So who else would have seen a real benefit from signing Gonzalez, and if failing to sign him, at least should have driven up the price for the Brewers? To go about this in an objective manner, I ran the ZiPS season simulation as of right now and then for each team with at least a 5% chance of making the playoffs currently, then I re-ran the projections with Gio swapped in for their current fifth starter. In situations in which Gonzalez doesn’t project to be an improvement for a full 100 innings — for example Mike Clevinger is expected back before Jefry Rodriguez or other replacements collect 100 innings — I’ve reduced the number of innings that Gonzalez replaces.

In all, 11 teams in playoff contention project, at least according to ZiPS, to have some kind of playoff improvement relative to baseline by giving Gio Gonzalez some of the innings that their back-end starters or various injury replacements are currently receiving.

As you might have expected given the title of the article, the Mets come out in “first” place of these 11 teams, with a boost almost double that of the second-place team, the Atlanta Braves. It’s a familiar story for Mets fans. The Mets, after making some significant moves this offseason to strengthen the bullpen and improve the team’s depth offensively, looked at the back of the rotation and decided to do precisely nothing. The team entered the season, in a division that was expected to be extremely competitive, with Jason Vargas as the team’s fifth starter. Intentionally. It was not a case of the preferred options being abducted by highwaymen outside Port St. Lucie in March. This is what they chose.

Gonzalez is far from a star, but he would have likely helped the Mets. And that’s with the rotation right now, as the team has three non-Vargas starting pitchers who averaged only 12 starts in 2017 due to various injuries. As bad as the back of the rotation is with Vargas, how quickly would it fall apart if they lose a couple of their good starters for any significant stretch of time? What’s even more concerning isn’t just that the Mets didn’t get Gonzalez, but that they didn’t even view him as an upgrade from Vargas.

Mets viewed Gio as a marginal upgrade over Vargas at best. Weren’t prepared to offer guaranteed dollars and face the prospect of carrying him all season, even if he flopped (the Mets seldom eat bad contracts).

You can always make up a couple million bucks in baseball. You can’t replay a season and correct your mistakes. Couple this with things like the Mets refusing to use Edwin Diaz in the highest leverage-index situation of the season last week because they rigidly wanted to save him to collect a save that might materialize later on and it makes you wonder just how well-equipped the Mets are relative to their competition at the real little things that can cost you a close divisional race.

Two other teams in the NL East would have gotten a significant projected bump from adding Gio. The Braves have been cycling most of their Triple-A prospects in-and-out of the rotation with none of them catching fire, and Julio Teheran’s hot spring hasn’t continued since the games started counting. The Washington Nationals have extremely thin rotation depth and are largely counting on Anibal Sanchez and Jeremy Hellickson both repeating surprising 2018 seasons. ZiPS projects both teams to have received some benefit from adding a dependable No. 3 or No. 4 starter.

The Brewers didn’t win the NL Central by signing Gio Gonzalez, but by adding him as insurance, they’ve done a lot to protect themselves from some of their downside scenarios. That’s a bargain at $2 million.