Kliff Kingsbury’s team has plenty of holes to fill in 2019, and the presence of 2018 No. 10 overall pick Josh Rosen makes the addition of another quarterback — even one with as much potential as Murray — a bit of a luxury. The Cardinals need blockers, receivers, and a slew of defensive talent to rebound from last year’s three-win campaign, and those players could find their way to Arizona with the capital received from a modest trade back in the first round of Thursday’s draft.

Last spring saw the Indianapolis Colts set the foundation for their rebuild by moving from the No. 3 overall pick to No. 6, extracting three second-round picks from the Jets in the process. Those selections turned up an All-Pro offensive guard (Quenton Nelson), a starting right tackle (Braden Smith), a useful situational pass rusher (Kemoko Turay), and the 34th pick in this year’s draft. With those players in tow and a healthy Andrew Luck behind center, Indianapolis pulled off a six-win improvement and returned to the postseason.

It’ll be much harder to spark a similar turnaround in Arizona — Rosen would need to make a massive leap just to approach Luck — but adding the offensive line, receiver, and tight end help to make his innovative offense work is high on Kingsbury’s to-do list. While he’s got a well-publicized gridiron crush on the Oklahoma quarterback who gained 460 total yards and scored four touchdowns against his Texas Tech team last fall, Kingsbury maintains the Cardinals haven’t made a firm decision on what they’ll do with the No. 1 pick.

It would behoove him and the organization to explore every angle in wringing the biggest possible return from his team’s spot atop the draft. So who could come calling as the first round approaches?

There are a handful of teams with the combination of assets and need to pull off a move.

With three first-round picks, no team in the 2019 NFL Draft has more assets, per Jimmy Johnson’s time-honored trade value chart, than the Raiders. Head coach Jon Gruden hasn’t been shy about making big moves to reshape his roster, trading away homegrown stars like Khalil Mack and Amari Cooper while adding big names like Antonio Brown and Trent Brown this offseason.

And though Oakland has thrown its support behind incumbent quarterback Derek Carr — a legitimate MVP candidate just two seasons ago — it feels like no one is really safe from Gruden and general manager Mike Mayock’s tinkering.

Especially when draft insiders are saying Gruden “loves Murray” and predicting a “big surprise” from Oakland.

Trading up to draft Murray would be another massive piece of roster turnover that helps Gruden assert his identity on one of the league’s most storied (and recently, cursed) franchises. According to Johnson’s chart, shipping the fourth, 24th, and 27th picks to Oakland in exchange for Arizona’s first- and fourth-round picks would be an equal-value (ish) swap. The Raiders could also sub in the Bears’ 2020 first-round selection (acquired in the Mack trade) instead of one of those late firsts if they’re so inclined.

That’s a deal that would allow Arizona to pick up an impact defensive player at No. 4 — whomever slips among Nick Bosa, Josh Allen, and Quinnen Williams — while grabbing some offensive help later in the round. Oakland would get a quarterback Gruden can mold from Day 1 of his NFL career, and trading Carr down the line could also help recoup some of the draft value going to Arizona. This would be a boon for Murray as well — he’d start his career throwing passes to Antonio Brown, Tyrell Williams, Ryan Grant, and J.J. Nelson.

No one’s really sure what the Giants are going to do in this year’s draft, but it’s clear they need an exit strategy behind a 38-year-old Eli Manning. That’s tied them to quarterbacks like Dwayne Haskins and Daniel Jones, but with two top-17 picks, it could also leave them in position to snag Murray if New York thinks he’s the next No. 1 pick who could lead the franchise for 15+ seasons behind center.

The Giants could be reticent to ship off multiple picks in a season where they have to plug the holes created by the departures of Odell Beckham Jr., Olivier Vernon, Landon Collins, and more, but head coach Pat Shurmur’s track record of getting the most out of his quarterbacks means a big swing at an elite passing talent could be worthwhile.

Shurmur was the offensive coordinator who coaxed Nick Foles’ first big breakout in Philadelphia and pushed Sam Bradford and Case Keenum to career years in Minnesota. He also helped Manning improve his passer rating by 12 full points in his first year as New York’s head coach last fall, albeit with Beckham Jr. on board for most of the season to lend a hand.

If he’s enamored with Murray, he hasn’t shown it:

Pat Shurmur on picking 6th: #NYG want “best player on the board at that time. If they do fit a need, that’s ideal.”
My take: It’s almost certain in this draft that 6th-best player will be a defensive player. We’ll see…

But his Giants could throw a package that includes the sixth and 17th picks and something along the lines of a 2020 second-rounder at the Cardinals to pry the reigning Heisman Trophy winner from their hands, if Shurmur feels like Murray is the best candidate for him to groom this fall.

The Broncos need a quarterback, but Murray doesn’t really fit the definition of the statuesque pocket passer for which John Elway searches. The Bengals might move away from Andy Dalton, but overpaying for that fresh start doesn’t seem like the right foot on which Zac Taylor wants to start his coaching career. The Dolphins need a quarterback as well, but with 2019 looking like a tank job, their picks may be too precious to package for a single player — especially with quarterbacks like Drew Lock or Daniel Jones potentially available at No. 13.

But lurking at No. 15 is a franchise that refuses to properly rebuild and one that loves overpaying for players. Washington isn’t flush with draft capital, but owner Dan Snyder and general manager Bruce Allen could throw a tremendous haul of future picks Arizona’s way in order to beef up a quarterback depth chart that was devastated by the broken leg that could potentially end Alex Smith’s career. While Case Keenum arrived from Denver to compete for the team’s starting role (with milk addict Colt McCoy), he’s only signed through the end of the season and is, undeniably, Case Keenum.

Washington would have to feel pessimistic about its chances of a top quarterback talent falling to No. 15 to feel the pressure to move up. Then again, with Arizona, New York, Denver, Cincinnati, and Miami all drafting in front of it, a trade toward the top of the draft might be the only way the club walks away with an upper-tier passer. And if Snyder’s going to take a swing, his free agency history suggests he’ll swing for the fences. Washington will have to throw its 2020 first-round pick and a strong haul of Day 2 picks from this year and next (and possibly 2021 as well) to jump from No. 15 to No. 1.

That would be extremely costly for a team with multiple holes elsewhere. Focusing away from the Washington’s need for playmakers would hinder Murray as a rookie and likely hand the Cardinals a primo draft pick (or series of draft picks) in 2020. Quarterback is a glaring weakness for the team, but it’s far from the only one. 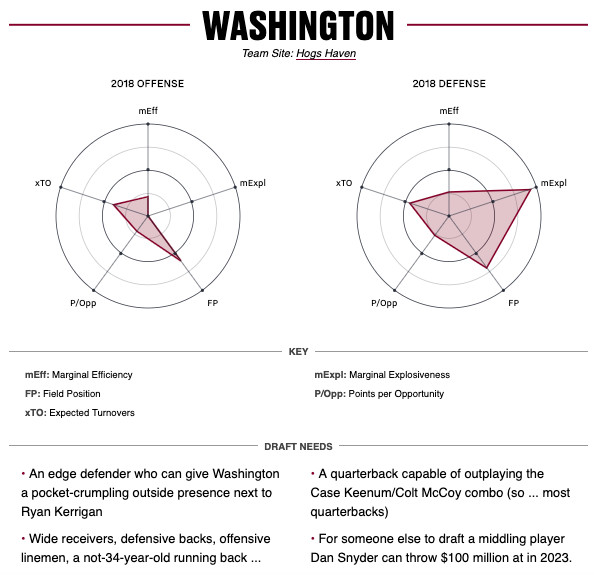 It’s the most unlikely of the trade-up scenarios for the top pick in 2019, but you can’t completely discount Washington just yet. Jumping up for Murray would be a big splash that potentially hamstrings the franchise in years to come.

Just talked to a Redskins source who told me Dan Snyder has “taken over the first round of the draft.”

The last time that happened the Redskins traded two future No. 1’s and a No. 2 to move up for Robert Griffin.

In that sense, it would be a tremendously Washington move.