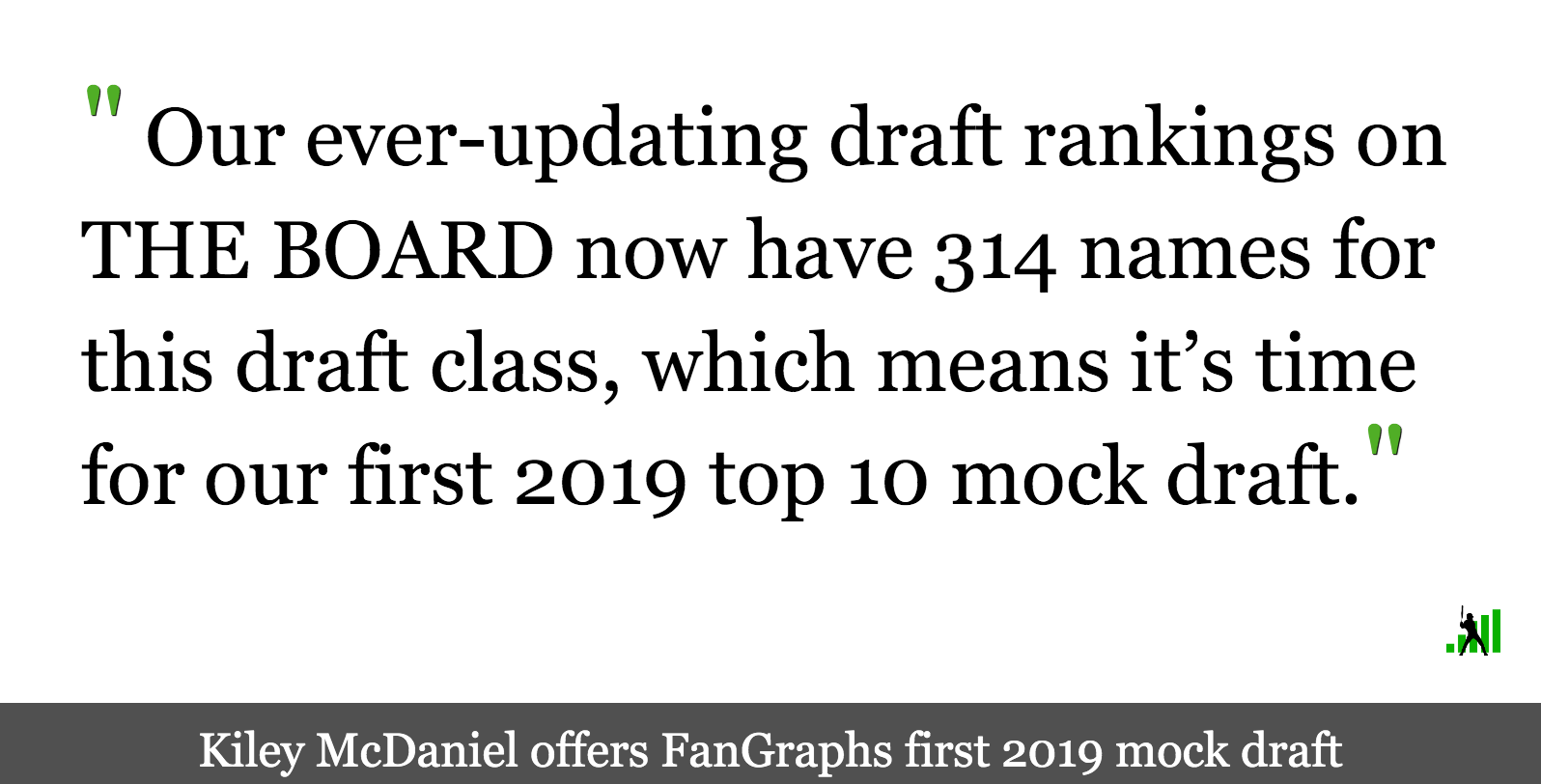 The June draft order, slot values, and total pool amounts are here on the site for your reference, and our ever-updating draft rankings on THE BOARD now have 314 names for this draft class, which means it’s time for our first 2019 top 10 mock draft. I think you know how this goes, but I’ll reiterate: I’m projecting what I think will happen after consulting with dozens of industry sources, not ranking these players on talent, as THE BOARD does that.

1. Orioles – Adley Rutschman, C, Oregon State
Rutschman still has a good lead here. It sounds like he had a shoulder injury in high school from football contact, but he hasn’t missed any time in college and clubs have mostly decided that even a worst case scenario for this issue still makes him the best prospect in the draft. There’s chatter Baltimore has made calls to explore backup options/bulk approach like new GM Mike Elias did while running the draft in Houston, but that’s seen as a long shot at this point. It’s also worth noting Baltimore’s history of whacking players’ medicals, but it’s unclear if the regime change alters that propensity.

2. Royals – Bobby Witt, Jr., SS, Coleyville Heritage HS (TX)
Two weeks ago, I mentioned that the early buzz was that Andrew Vaughn had the lead for this pick. Late last spring, GM Dayton Moore saw amateur games for the first time in awhile and Kansas City’s first 11 selections were college picks. This came on the heels of four of their previous six first round picks coming from the prep ranks, with their draft philosophy leaning that way as a whole.

It seemed like a philosophical shift at the beginning of a rebuild, but I’ve talked to about four times as many sources on this topic in the last two weeks as I did before, and almost everyone since then is insistent that Witt is the pick here. Vaughn and possibly Hunter Bishop have been mentioned as backup plans, but the top three picks are thought to be pretty locked in at this juncture, with a couple scouting directors guessing it’s about 90% certain to go the way I’ve outlined here.

3. White Sox – Andrew Vaughn, 1B, Cal
With a recent run in the past three drafts of safer-skewing, college hitters in Chicago’s top three round picks (Nick Madrigal, Steele Walker, Jake Burger, Gavin Sheets, Luis Gonzalez, Zack Collins, Alex Call), and a rebuild reaching the critical stages, a quick-to-the-majors prospect makes the most sense here. With Jose Abreu on the downside of his career, Vaughn even fills a need: exactly what the White Sox are looking for here. Nick Lodolo sounds like the most likely backup option if Vaughn and Rutschman go first and second. GM Rick Hahn has seen C.J. Abrams this spring and some teams think the Sox would take Witt if he slides, but none of those alternate scenarios seem likely, with almost everyone in the industry saying Chicago wants a collegiate player here and covet Vaughn.

4. Marlins – C.J. Abrams, SS, Blessed Trinity HS (GA)
This is where things start to get a little tricky. After NHSI, where new scouting director D.J. Svihlik and VP Gary Denbo were locked in on Abrams and seemingly uninterested in Riley Greene on an adjacent field, industry rumors intensified that Abrams was the preference. Earlier in the spring, most believed there was a preference for a college player here, with Lodolo the most common connection. Svihlik used to be on staff at Vanderbilt and some think J.J. Bleday also makes sense here. I’ll go with Abrams for now, but it’s pretty close between these three options and I get the impression this decision is far from made, anyway. Denbo has also seen Witt a few times.

5. Tigers – Riley Greene, RF, Hagerty HS (FL)
The Tigers have been all over Greene all spring, and one of their scouts has a child that goes to Greene’s high school. He’s struggled a bit lately (his swing was too big when I saw him a few weeks ago and he performed just okay at NHSI) but was a strong performer all summer, so most don’t consider it a long-term concern. There isn’t much consensus on whom else Detroit would consider here as another option, though Witt has been mentioned in the event he slides. Power arms and SEC performers are historically the Tigers’ type, so Bleday and his nation-leading 20 homers also makes some sense, but Greene appears to be their preference and he’s almost certain to be available.

6. Padres – Nick Lodolo, LHP, TCU
The Padres has been heavy on Bleday and Lodolo, appearing to lean to college both because that’s what’s here and because it fits their new competitive window. Bishop just got a long look from the decision makers and appears also to be entering their mix, but is believed to be more of a third option at this point. Given GM A.J. Preller’s past decisions, this would also appear to be a spot where a sliding Witt or Abrams could get snapped up. Kentucky lefty Zack Thompson also seems to be in the mix.

7. Reds – J.J. Bleday, RF, Vanderbilt
It sounds like the Reds are on Greene, Abrams, and Lodolo, who are all gone in this scenario. Bleday (video) is the consensus best guy on the board and sources have indicated the preference here is college, with last year’s pick of Jonathan India serving as a template for new scouting director Brad Meador. Cincy still needs pitching and seems the most aggressive on junior college righty Jackson Rutledge, though he fits more as an overslot second pick than underslot first pick.

8. Rangers – Alek Manoah, RHP, West Virginia
Texas is the toughest club to peg in this mock. It sounds like they aren’t excited about what they think will be available to them, and clubs picking around here also don’t have much feel for where Texas leans. This appears to be the floor for Abrams and Witt if they slide, but they’re unlikely to get here. Manoah and Bishop both make sense, but the most common rumor is that the Rangers go below slot for a pitcher to set up an overslot choice with their second pick. Manoah is perceived to be an easier sign than some other options with a cleaner medical than late-rising Kentucky LHP Zack Thompson.

9. Braves – Hunter Bishop, LF, Arizona State
This pick is compensation for not signing Carter Stewart last year, and he projects to go much later this year, so the Braves appear to have come out ahead in the exchange. This pick also isn’t protected if Atlanta doesn’t sign whoever they take, so a tough sign likely isn’t an option. It appears Atlanta would take Abrams or Witt if they get here, and they’ve been scouting Lodolo, Bleday, and Bishop as primary options, with a good chance one of them gets to this pick. It’s unclear if the other prospects on the board at this point excite them, in the event that Texas takes Bishop and all the players Atlanta has been tied to are off the board.

10. Giants – Bryson Stott, SS, UNLV
This weekend, the Giants sent in their heavy hitters to see Missouri RF Kameron Misner at Georgia (his swing still needs some work). He may have the most upside on the board, but he hasn’t been good in SEC play and lacks a summer track record to fall back on. Stott could be another Brandon Crawford, though it’s unclear how the new regime will make high-profile decisions like these. The rumor is that this is another pick that will go college, and likely a college hitter, with new Giants GM Farhan Zaidi having prized versatility and defensive value when building the Dodgers.

Kentucky LHP Zack Thompson has been closing hard lately (while Lodolo has just been okay the last few weeks), so he could jump into the top 10, but some clubs are concerned about his elbow long-term, so that keeps him just out of this projection. Washington prep CF Corbin Carroll is the other prospect who has been mentioned at more than a few top 10 slots, but more as another player in the mix than a primary target. With picks 6-10 leaning college, and three prep bats in the top five, he slides just out of this projection, but could easily jump in future versions. The next two college bats (North Carolina 1B Michael Busch (vide0) and Texas Tech 3B Josh Jung) would also figure to go quickly if we had continued this exercise, but unfortunately, the information gets much spottier at this juncture of the draft.