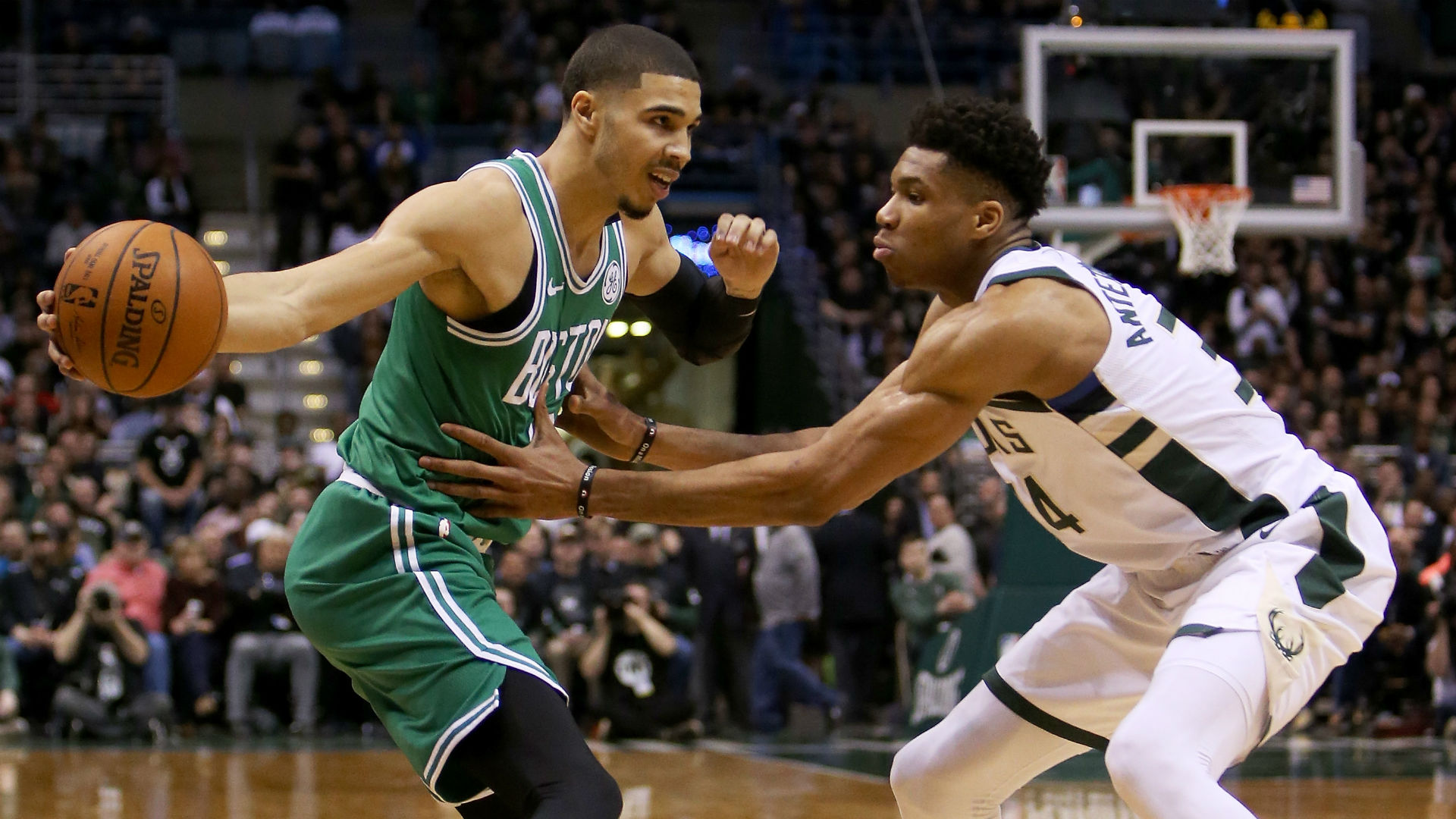 Celtics vs. Bucks: The backstory

Where to begin? Milwaukee and Boston engaged in one of last season’s best playoff battles, a seven-gamer in the first round in which young Celtics Jayson Tatum, Jaylen Brown and Terry Rozier stepped to the fore, with Rozier getting into a series-long beef with Eric “Drew” Bledsoe, Brown posting two 30-point nights, the Bucks’ Khris Middleton shooting 25-for-41 on 3-pointers (nearly 61 percent) and the teams separated by just four points over the seven games.

The Celtics were without stars Gordon Hayward and Kyrie Irving, but they were anchored by Al Horford and timely assistance from role players. They began a run that brought them within minutes of the NBA Finals before finally losing to Cleveland.

Much has changed, with Mike Budenholzer taking over the Bucks and the team reinforcing its core around Giannis Antetokounmpo, Bledsoe and Middleton with the addition of Brook Lopez, George Hill, Ersan Ilyasova and Nikola Mirotic. They helped Milwaukee to a league-best 60 wins this season under Budenholzer’s guidance, which called for the Bucks to launch 3-pointers almost at will (38.2 per game, second in the league, up from 24.7, 25th in the league). The Bucks got little resistance from the Pistons in the playoffs’ opening round.

On the other side, the Celtics have Irving and Hayward back, and after a fractured and disappointing regular season, Boston grinded its way to a sweep over the Pacers in the first round. The two key factors were Hayward’s overall play (12.3 points, 48.6 percent shooting, 44.4 percent 3-point shooting) and Irving’s ability to create scoring against a tough defense (22.5 points and 7.8 assists).

Celtics vs. Bucks: The key player

Antetokounmpo had good numbers against the Pistons, but he wasn’t necessarily stellar and often didn’t look like the MVP candidate he has been all season in Milwaukee – he had 14 points on 5-for-13 shooting in Game 3, with four turnovers and five fouls, for example.

The key for Boston will be how to force that kind of ragged performance consistently, given the fact that Antetokounmpo scored 30, 30 and 33 in three games against the Celtics this year, making 32-of-54 shots (59.2 percent).

This is where the presence of Boston’s defensive irritant, Marcus Smart, will be missed. But the Celtics still have a variety of looks to give Antetokounmpo, probably starting with Marcus Morris, who will surely be physical with Antetokounmpo and attempt to draw offensive fouls. Horford, too, will get some time on Antetokounmpo, and look for Horford to try to meet Antetokounmpo at or above the free throw line to keep him from getting a running start attacking the rim.

And don’t be surprised if Brad Stevens dusts off a wild card – wing Semi Ojeleye, who played Antetokounmpo well in spot duty in last year’s postseason but did not play a minute in Round 1. The Celtics will foul Antetokounmpo frequently, but will lean on the defensive flop frequently, too, hoping to rattle him or get him into foul trouble. Keeping him below that 30-point mark will be critical.

Celtics vs. Bucks: The big number

Boston is 18-4 when Hayward has scored at least 15 points, and though Milwaukee has a good bench to pull from, the Bucks don’t quite have the kind of weapon that Hayward can be when he is attacking and aggressive.

The Bucks are just as tough when it comes to squeezing shooters in the paint – they allowed a restricted-area shooting percentage of 47.0, lowest in the NBA. Still, Boston needs Hayward to keep building the way he’s done throughout the season, and that means attacking the rim. It’ll be a challenge, but it’s one where Hayward needs to hold his own.

Celtics vs. Bucks: Xs and Os

Lopez averaged just 5.0 points against the Celtics in three meetings between the teams this year, by far his lowest output against any team. That’s no fluke.

Lopez struggles against teams with big men mobile and smart enough to stick with him on his inside-outside jaunts and with enough perimeter ability to pull him away from the basket on the defensive end. After dispatching the big men of the Pacers, expect the Celtics to plop Aron Baynes back on the bench and go with smaller lineups, with Horford as the starter at center.

That could render Lopez nearly useless in the series and would put an emphasis on Boston’s ability to convert on drive-and-kick opportunities. Without Lopez, the Milwaukee defense collapses more, and for players like Irving, Hayward and Tatum, knowing when to drive and finish vs. driving and passing back to the perimeter will be very important.

The Bucks shoot a lot of 3s, but they allow opponents to shoot the most 3s in the league. If Lopez is not on the floor and other Bucks defenders must help in the paint more, the Celtics have a chance to win the series if they can get decent 3-point shooting.

NBA PLAYOFFS 2019:
Full schedule | Picks from first round to Finals

Celtics vs. Bucks: The prediction

The Celtics came away with a sweep against Indiana, and that seemed to push aside all of the chemistry issues. But they were playing the scoring-impaired Pacers, who were still within one point with six minutes to play in each of the last three games of the series. It would behoove Celtics backers not to get too excited about the opening round.

Still, this is a tough matchup for the Bucks, and the Celtics can use their roster versatility to create mismatches and take away Milwaukee’s top options. The Bucks are a different team than they were last year, but this is a franchise light on experience – Milwaukee has not advanced beyond the second round of the postseason since 2001. Now, with Antetokounmpo flanked by Middleton and Bledsoe as part of a deep Bucks group, it’s time to put that experience gap aside.

This should be as entertaining a series last year’s first-rounder was, but the Bucks have the edge in defense and chemistry, plus home-court advantage. Give them the series by the narrowest of margins.