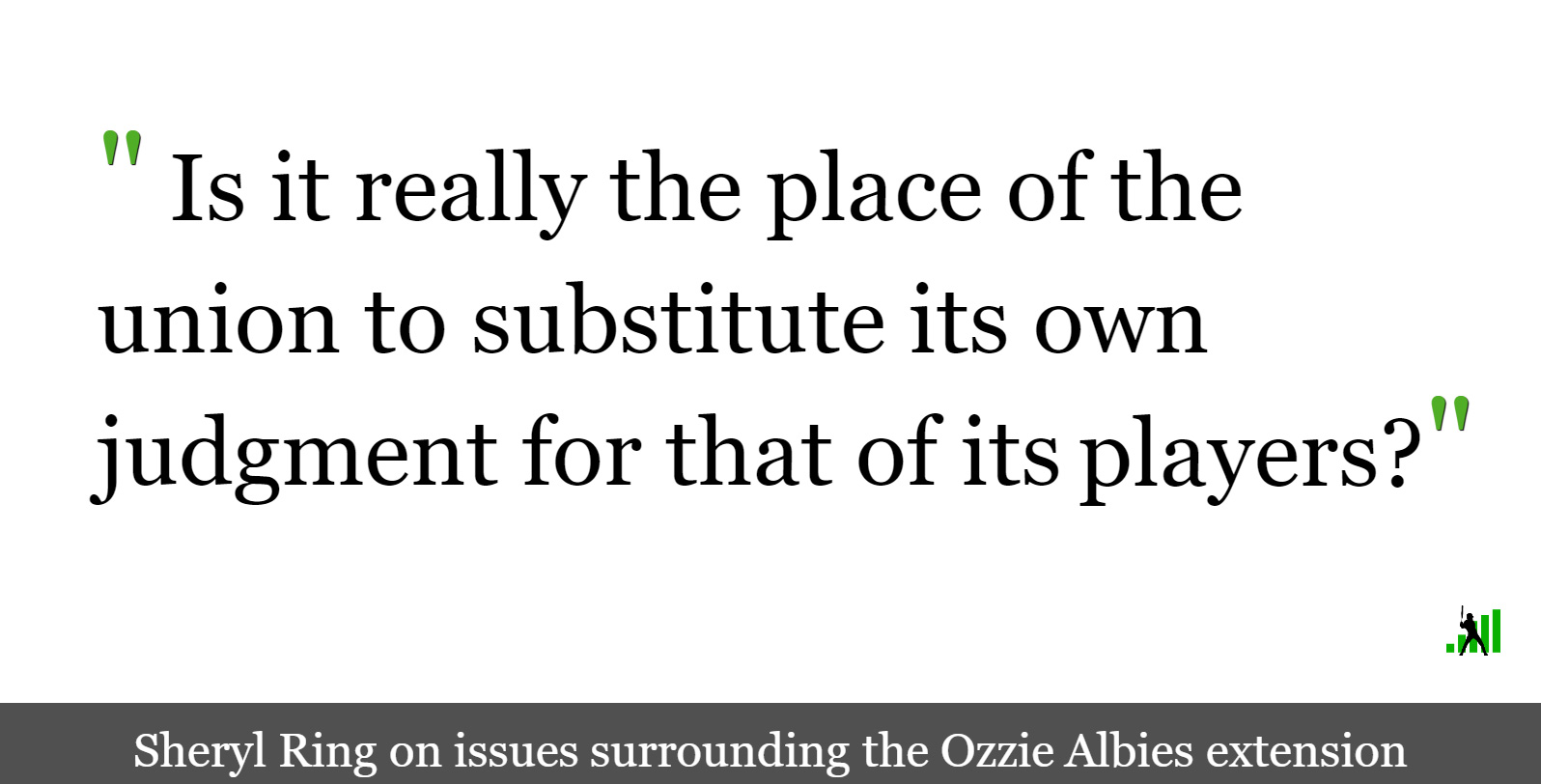 Earlier this month, Braves franchise building block Ozzie Albies agreed to an eyebrow-raising extension that was widely considered to be among the most team-friendly in recent baseball history.

There was already speculation that the deteriorating state of free agency appeared to be incentivizing extensions, but Albies’ deal was shocking even given those concerns. Veteran baseball scribe Jeff Passan went so far as to say that the deal was being considered in major league circles as “among the worst ever for a player.” That leads to a number of uncomfortable questions about how these deals are to be handled in the future – by players, by the league, and by the Major League Baseball Players’ Association.

Let’s start with Albies’ representation, an agency called SportsMeter. According to MLB Trade Rumors’ Agency Database, Albies is among the agency’s more marquee clients, with the firm also representing Craig Kimbrel, Nicholas Castellanos, and Francisco Lindor, among others. (According to some reports, SportsMeter also represents Cleveland ace Corey Kluber.)

SportsMeter hasn’t had a great offseason. Not only did they negotiate the much-maligned Albies deal, but they have been unable to broker a contract for their biggest pitcher client, Kimbrel, despite entering the offseason with dreams of a nine-figure contract. That’s led to some speculation from former Brave Eric O’Flaherty that the Albies deal was part of an effort to land a deal for Kimbrel with the savings. Other players certainly haven’t been shy in expressing their feelings about it. Castellanos, who is headed for free agency, may have had similar feelings when he switched his representation to Scott Boras last week. Other baseball writers like Passan and Evan Altman have suggested that SportsMeter may have negotiated the deal now so as to obtain a commission before Albies decided to sign with a bigger agency. As Passan explained:

About a dozen large agencies are employed by a majority of players. These agencies, because of their size, do not depend on single commissions for the health of their businesses and thus are inured from the moral hazard that can influence those with fewer clients. At 5 percent commission, a $20 million extension means $1 million for an agent. The incentive, then, to do an extension can be strong for smaller shops — Albies employs one in agent David Meter — which also fear client-poaching from larger agencies. Even among the larger agencies, the concern over losing a client — and a commission — can compel extensions.

Executives know this. When considering players to draft, a number of teams bake into their valuation a player’s agent — and the openness to a potential extension. It’s a small factor. It’s a very real one, too.

But while that kind of speculation is natural given Albies’ deal, it doesn’t make a whole lot of sense for the agency from a legal perspective. That’s because negotiating an under-market deal for Albies just to land Kimbrel a contract, or to obtain a commission, would be wildly unethical and almost certainly illegal, as we’ve discussed before.

In fact, SportsMeter is a fairly well regarded agency, even if it is small. How small? Their Twitter isn’t verified and has fewer followers than I do. Their website is, shall we say, sparse. But despite this, the agency has an impressive record, most notably with respect to endorsement deals. The agency is helmed from Florida by David Meter, an attorney who is no neophyte in the MLB contract game.

Let’s assume that SportsMeter didn’t do anything intentionally untoward; that doesn’t change the fact that they negotiated a really bad deal for Albies. Now, Albies may well be happy with the deal – after all, he’s the client, and (at least in theory) had to approve the contract. He certainly had to sign it after it was agreed upon. So even if Meter recommended against signing it, Albies could well have ordered him to accept it. But the fact remains that Albies appears positioned to make substantially less over the course of his career than he might have had he waited for free agency, or for the raises he would like have enjoyed in arbitration.

The biggest wild card here is the MLBPA, the entity that authorizes and accredits agencies. In response to your questions, no, the MLBPA doesn’t have authority to cancel a player’s contract; that kind of power would have to be negotiated into the Collective Bargaining Agreement. But agents of major league players have to follow regulations in order to maintain their licensures, and those regulations do include some rules potentially applicable here. For instance, we have Rule 5(D), which governs the quality of representation that agents are required to provide.

The MLBPA expects each Player Agent and Expert Agent Advisor who has been granted certification to represent or assist in representing Players and each Applicant seeking certification, to carry out Player representation services with the highest degree of professional competence and integrity. Toward that end, Player Agents, Expert Agent Advisors, and Applicants seeking Certification must take the necessary steps to become knowledgeable about the history and business of Major League Baseball and the MLBPA, including their collective bargaining agreements, the Major League Rules affecting Players, these Regulations, data relating to Player salaries and benefits, negotiating techniques, and all relevant legal requirements.

That all makes perfect sense – an agent is supposed to represent their client competently and in good faith. And yet the regulations do make clear that agents have a duty to the MLBPA as well:

To provide the MLBPA, upon request, with all documents, information and materials the MLBPA deems relevant with respect to any inquiry concerning these Regulations or the Basic Agreement and in all other respects to cooperate fully with the MLBPA in its representation of Players, and to consent to arbitration under Section 7 of any dispute with the MLBPA concerning the production of such documents, information and materials, including any claim of privilege;

If the MLBPA’s representation of players is intended to increase salaries, then theoretically Rule 5(B)(11) bars an agent from cooperating with a team to “undermine” a player. And Rule 5(B)(13) adds that an agent can’t agree to a provision which would undermine the CBA.

No Player Agent, Expert Agent Advisor or Applicant shall negotiate or agree to, or attempt to negotiate or agree to, any provision that purports to have the effect of eliminating or reducing any Player right or benefit contained either in any collectively bargained agreement between the Major League Baseball Clubs and the MLBPA, or in the Uniform Player’s Contract of a Player.

What all of this means is that an agent isn’t allowed to negotiate a contract on his client’s behalf that is bad for players’ rights. If Scott Boras negotiated a contract wherein Bryce Harper agreed to sign with the Dodgers for the league minimum, that would violate the Rules even if Harper was just fine with it. And the Rules allow the MLBPA to suspend or strip an agent of their certification at the union’s sole discretion for any violation of the rules, including everything from a lack of competence to undermining the union. (It’s also worth noting that agents are covered by a variety of state laws, and attorney agents are governed by legal ethics rules.)

So no – the MLBPA can’t nix the Albies contract, even if it wanted to do so. But what the union could do is nix SportsMeter – or, more precisely, nix Meter’s certification. Certifications and licensures follow individuals, not companies. It’s worth noting, because it’s a powerful tool the union has yet to utilize. There is nothing preventing the union from terminating or suspending the license of an agent who negotiates a deal that is detrimental to players as a whole, because that would – technically speaking – violate the rules.

But that’s the type of expansive application we’ve not yet seen from the MLBPA, for a few reasons. For one thing, there’s the problem of how you make the determination that a contract has damaged players overall. For those who argue that Meter should lose his agent certification as a result of the Albies deal, the question is what the ramifications would be. What, exactly, makes a deal “undermining” to players’ rights as a whole? Would we be imputing a requirement that all players must always seek the most money in a contract? If so, how do we differentiate between total value and average salaries? Are we eliminating the ability of players to give hometown discounts? If not, are we saying only egregious cases merit this kind of discipline? And if so, what makes a case egregious? Not every case will be as cut-and-dried as Albies’ is. And yet, even here, it seems Albies is satisfied with his contract. Is it really the place of the union to substitute its own judgment for that of its players?

None of these questions have easy answers, and I won’t hazard guesses to them here. Until and unless we have a clear, cut-and-dried case of self-dealing or the like, merely agreeing to an under-market deal isn’t the kind of thing that merits the loss of agent certification without opening a pretty big can of gagh. It’s just one more thing that contributes to the disparity in bargaining power between the league and the players.