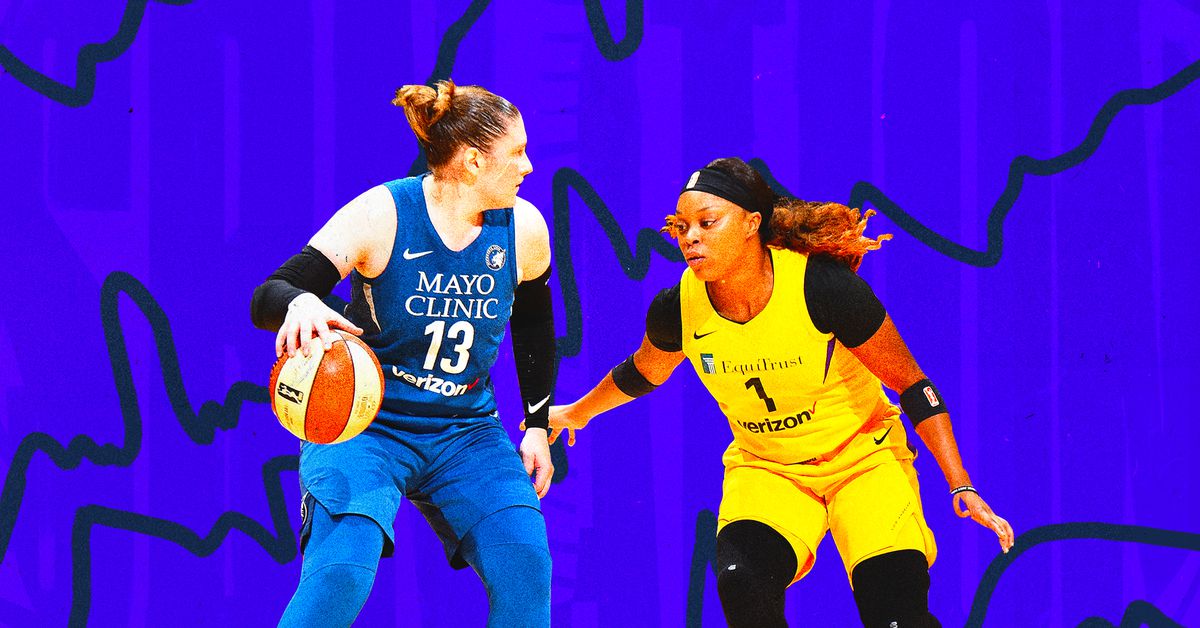 The Minnesota Lynx are putting rivalry aside in the name of success. The Lynx have agreed to trade third-year guard Alexis Jones to the Los Angeles Sparks in exchange for Odyssey Sims, the teams announced on Monday.

Sims will, in part, take the place of Lynx point guard legend Lindsay Whalen, who retired last season. The two had a history of beef in one of the WNBA’s biggest rivalries over the past three years, and it’ll take some adjusting for fans in Minnesota to cheer her on.

The Lynx are still in win-now mode despite losing Whalen to retirement and superstar Maya Moore for the season for personal reasons. Sims, the 2014 No. 2 overall pick, will assume a big scoring and play-making role in Minnesota in their absence, and it appears she’ll be a part of the team’s long-term vision. Sims, a restricted free agent in February, signed a three-year max contract with the Phoenix Mercury which the Sparks matched, according to WNBA Insidr’s Rachel Galligan.

The Minnesota Lynx reigned over the WNBA for most of the decade, winning four of the last eight WNBA championships. In 2016 and 2017, the Los Angeles Sparks were far and away the team’s best competition. It resulted in the sides trading titles in decisive Game 5 wins.

Naturally, the intensity between the two best teams and their point guards escalated as time went on, but Sims and Whalen took it ten steps further. Scraps between the point guards eventually amounted to Whalen tossing Sims to the ground in the opening minutes Game 4 of the 2017 Finals. She was called for a flagrant 1 foul.

That was it for the buzzer-beaters, but the beef…

THIS IS WHERE THE BEEF TRULY REHEATS.

Lindsay Whalen is gonna be a HOFer. She’s known for being tough as hell.

That’s why she had no trouble flagrant fouling Odyssey Sims, her nemesis-to be. pic.twitter.com/J4IF5sb2Tr

If you thought it was unintentional, you’d be mistaken. After the game, Whalen said, “I was sending a message to the whole team — and to everyone — that we’re here tonight. “We will not go down without a fight.” Whalen was hit with a $200 fine from the league for the foul, but she took it as a badge of honor. Head coach Cheryl Reeve later told the New York Times, “[Whalen] said it was the best $200 she ever spent.”

That beef was met again in the 2018 regular season opener between the Lynx and Sparks. After a timeout was called, the two went face-to-face and shoved each other out of the way, proving they still weren’t over it.

After the Sparks won on a buzzer-beater from Chelsea Gray, Sims took a shot at Whalen, telling The Athletic, “[Whalen] was on the bench for a little while, honestly, didn’t even know if she was still on the team at one point.”

And now, she’ll become Whalen’s successor next to at least two starters from her rival Lynx team — Sylvia Fowles and Seimone Augustus.

Why this trade makes sense for the Lynx anyway

Beef aside, the Lynx moved a backup point guard for a starter, which makes a lot of sense given the team’s construction. Without Moore, the team’s leading scorer, Minnesota needs shot-makers to replace what she gave them. Sims could be a big piece of that puzzle.

The Lynx bought low on Sims, whose value dropped this season after she fell further in L.A.’s depth chart behind All-Star Chelsea Gray. In 24 minutes per game, she scored a career-low eight points per game on 39 percent shooting with three assists. In two playoff games, she only saw 29 minutes total. Stacked behind Gray and two former MVPs, Candace Parker and Nneka Ogwumike, Sims wasn’t in the best position to succeed.

There’s reason to believe in a Lynx system that’ll see the ball in her hands more, she’ll have a much bigger impact on the game. In her rookie season in 2014, she averaged 17 points on 41 percent shooting with four assists per game.

Why this trade makes sense for the Sparks

Moving a former No. 2 pick for a backup in Jones makes more sense that it appears for L.A. Just like the Lynx, the Sparks believe they can win it all this season. Parker and Ogwumike are back, as are Jantel Lavender and defensive stalwart Alana Beard. Gray is expected to re-sign before the season starts next month, and L.A. will also add No. 7 pick Kalani Brown. What the Sparks are still missing is outside shooting, though, and that’s something Jones can do better than Sims.

In two seasons, Jones is shooting 34 percent from beyond the arc in the WNBA. It’s on a small sample size, as she’s taken just 79 attempts, but she was an elite shooter in college. She shot 41 percent from deep in each of her last two seasons at Baylor.

Jones is only likely to play a small role for the Sparks, but she’ll provide the three-point shooting they need from a backup guard — and save some salary cap space in the long-term (Jones is still on a rookie-scale contract.)

If Minnesota fans can find a way to cheer on their rival, this trade looks to be a win-win on both sides.