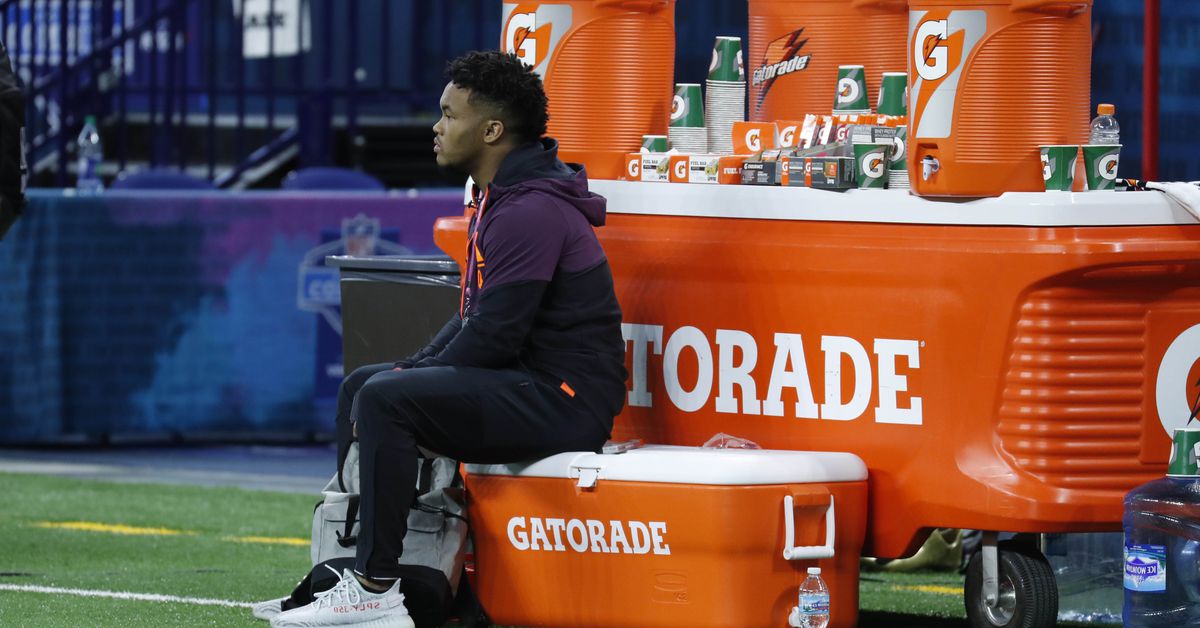 It’s NFL Draft WEEEEEEEK! Let’s go! All the speculation, the rumors, the scouting reports, mock drafts, and hype is about to pay off with the first round on Thursday, followed by rounds two and three on Friday, and finishing with the final four rounds on Saturday.

As usual with the draft nearing, people start to doubt what they’ve known for a while.

I was one of the first in the media to firmly say the Cardinals would draft Kyler Murray. I tweeted about it and wrote about it as well. Murray just makes too much sense for Kliff Kingsbury’s offense, and if you hire the coach, you get him the quarterback he wants.

While Murray is still the huge odds-on favorite to be taken first overall, there are more mock drafts and rumors this week that DON’T have the Cardinals taking Murray. If the Cardinals shock everyone and skip on Murray, there’s a strong chance Murray drops out of the top 10 and maybe isn’t even the first quarterback taken!

Let’s explore how that happens:

1. The Arizona Cardinals could draft Nick Bosa or Quinnen Williams.

2. The San Francisco 49ers could draft Bosa or Williams.

The Niners clearly don’t need a quarterback and will gladly take whoever the Cardinals pass on. Whichever player they add will take away double-teams from either Dee Ford or DeForest Buckner. You can’t double all three pass rushers.

3. The New York Jets will target a defensive player or trade down.

Ditto on the “no quarterback need” for the Jets. Over the last week, more mock drafts have the Jets taking defensive tackle Ed Oliver, even ahead of Williams (if Murray goes No. 1 and Bosa goes No. 2). No matter what the Jets do, a trade down is possible.

This is where things get interesting. It’s been hard to judge, despite the praise from Mike Mayock and Jon Gruden, if the Raiders are all-in on Derek Carr. He didn’t play well last season and Gruden didn’t draft him. However, with his high salary and the additions of Antonio Brown and Tyrell Williams, the weapons are there for Carr to improve. Gruden doesn’t seem like the patient type, nor does Brown, so drafting Murray doesn’t feel right for the Raiders.

Lastly, they’d need to find a trade partner for Carr — otherwise you’re paying too much for a backup quarterback.

5. The Tampa Bay Buccaneers will stick with Jameis Winston for at least another year.

6. The New York Giants might draft a quarterback, but Murray doesn’t fit their style.

The Giants are an old-school organization and stick to their scouting principles and molds for players. Murray doesn’t fit the mold. He’s not being drafted by the Giants. If the Giants do take a quarterback, it seems as though it might be Duke’s Daniel Jones, who reminds some of the Manning brothers.

7. The Jacksonville Jaguars’ priority is to find protection for Nick Foles.

They just signed Foles to a big contract, plus they desperately need help at offensive line. They will have their choice of linemen at this spot. I’d expect Florida’s Jawaan Taylor or Washington State’s Andre Dillard here.

8. The Detroit Lions need weapons for their quarterback, not a new quarterback.

It’s not happening with the Lions either. They are firmly committed to Matthew Stafford and QB isn’t a need. They need a tight end and could draft the top player at that position at No. 8.

9. The Buffalo Bills need to surround their young quarterback with talent.

Josh Allen is entering his second season so yeah, that’s a no for Murray going to Buffalo. The Bills will be drafting help for Allen, most likely a young offensive tackle.

John Elway has professed his love for tall quarterbacks who can hand the ball off and well, Murray isn’t tall. I can’t see this match being made. I have to think that if the Broncos go quarterback, it’s Drew Lock.

11. The Cincinnati Bengals make sense for Murray if they aren’t committed to Andy Dalton.

This could be the first spot for Murray. The Bengals have a brand new staff, and I’m not sure anyone knows what they are thinking. If they aren’t sold on Andy Dalton, they could start over with Murray.

13. The Miami Dolphins are a possibility for Murray — unless they wait for next year.

This seems like a match. The Dolphins have Ryan Fitzpatrick, but Fitzmagic isn’t a long-term solution at quarterback. Could Murray be the fit? Possibly. Or the Dolphins are going to attempt to stink it up this season for their shot at one of the quarterbacks in the next draft class.

15. Washington is another likely spot for Murray, if he’s still available.

Just like the Dolphins, this could be a fit for Murray. Washington doesn’t have an answer at quarterback, with Alex Smith’s awful injury last season.

Just wild, right? The quarterback most consider to be the best in this class could fall out of the top 10, simply because of fit. This would turn a draft that feels “blah” into an exciting journey!