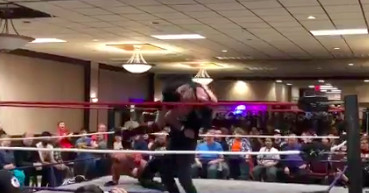 The wrestling world is buzzing on Monday after CM Punk made an appearance at a tiny independent wrestling show in Wisconsin over the weekend.

Wearing a mask and entering without fanfare, Punk hit his finishing move on Daryck St. Holmes before leaving the ring and getting in a waiting car. The move has wrestling fans questioning whether Punk is contemplating a full-time return to wrestling, especially in light of AEW signing talent to their roster — but that seems unlikely.

“But you never know, I could pop up here and there. Let me explain that to you even better: it’s not going to even be televised, it’s going to be me in a ninja f***ing outfit wrestling one of my buddies and nobody’s ever going to know. It’s going to be very ‘Monty Python,’ so to speak.”

Punk is still training mixed martial arts in Milwaukee, and MKE — the show he appeared at over the weekend is owned by Punk’s longtime friend and former Ring of Honor coworker Silas Young.

Here is some PUNK running in a match last night @MKE_Wrestling you never know who’s in gonna show up at our shows. Former world champions have been stopping in at the last couple shows!!! Don’t miss out on May 17 at our new home Buenavista Banquets 76&oklahoma next to AMF lanes https://t.co/rr8xVH8UJ0

Was this a one-off appearance or part of a larger scheme to return to the ring? Punk has been vocal in his dislike of WWE in the past and the manner in which he left the company, but it still feels like a long shot that this marks a grand return with someone like AEW.

Time will tell, but this certainly has people talking — and that’s what it was all about in the long run.