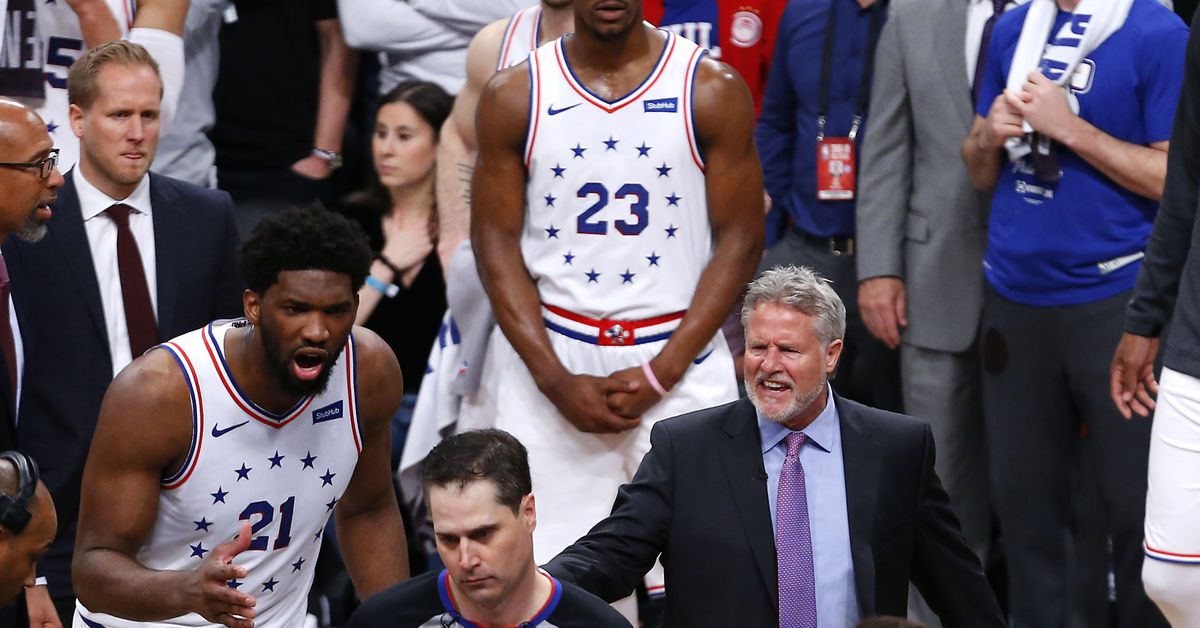 BROOKLYN — This was the scene after the 76ers came from behind to defeat the Nets in Game 4, 112-108: laughter. Despite a third-quarter scuffle that ejected one of Philadelphia’s four stars, the post-game press conference for Jimmy Butler and Joel Embiid became a comedy special.

It was utter mayhem on the basketball court midway through the third period after Embiid issued Jarett Allen his second flagrant foul of the series. Only this time, Jared Dudley came to Allen’s defense, shoving Embiid and barking in his face. And only this time, Butler came to Embiid’s defense, ramming Dudley with the need to be restrained.

Embiid never had a chance to even think about retaliating. Butler handled his light work. That’s the way this relationship works.

Butler and Embiid had come to an agreement earlier in the season. They acknowledged that the two cannot win without one another.

Embiid is the workhorse, the dominant presence giving opponents matchup nightmares. Butler is the closer, the playmaker who has proven, time and time again, he can create under pressure. If Embiid carried the team through the first three periods, Butler would carry the team across the finish line. It’s the wild experiment in Philly that’s got the Sixers headed to the second round for a date with Toronto.

The 76ers had no choice but to come together in the face of an unlikely enemy. After all, Dudley called Ben Simmons “average in the half-court,” to which Simmons responded, “That’s coming from Jared Dudley. Come on.” The story was no longer Nets vs. Sixers, but beef between a veteran and a young star.

The real story is this loaded 76ers team, crystallizing a chemistry that has waffled back and forth all season. Chemistry was the only question mark after taking two stars and adding another two in the middle of the season. If this team is connected, like they looked against Brooklyn, it could be the beginning of something special in Philadelphia.

After all, the 76ers upended their team in November to acquire Butler, then absolutely bulldozed it at the trade deadline to land Tobias Harris. The moving parts blasted the chemistry from Philly’s previous season. They played the second half of the year figuring it out on the fly. Somehow they steered the plane through turbulence into the East’s third seed.

Some felt Dudley had gotten into Simmons’ head. Simmons responded with a signature playoff performance in Game 3, then refused to talk about Dudley any further.

But Dudley continued jawing at Simmons in Game 4. He stripped him in transition in the second quarter, then after a timeout was called, Dudley trash-talked Simmons on the way to the bench. Then, he made a three-pointer in the same period, and gave Simmons a taste of his own trolling medicine.

Dudley was exactly the villain the Sixers needed. He was the the trolling force who helped Philadelphia unite.

Joel Embiid on Jared Dudley: “First of all, he’s a nobody. When opponents do stuff like that, they’re trying to get us out of our game. I’m too valuable for that.” (via @DefPenHoops) pic.twitter.com/uAtSAz5FL5

The Sixers knew Dudley would have something extra in Game 4; both Embiid and J.J Redick admitted the team was expecting it this time around. But Butler dealt with Dudley, then the Sixers dealt with the Nets. This series against a gritty Brooklyn team is exactly what Philly needed to grow.

It was the matchup that brought the team together after the regular season tried to tear them apart.