When Jonah Williams stepped onto the campus at the University of Alabama, it couldn’t have taken long to notice he was different. He was already a self-described “film junkie” upon arrival, not exactly the norm for a teenager whose counterparts were more likely binging on Fortnite than on football tape.

On a normal day in Tuscaloosa, it wouldn’t have been uncommon to see Williams toting a notebook that included three points of focus for that day’s practice. It was part of his routine. He also created personalized spreadsheets that detailed each opponent’s pass-rush preferences. He then turned that data into spider charts to help decipher the information.

Williams viewed playing offensive tackle at Alabama as a “full-time job,” to the point that there was no telling where the unattainable search for perfection would lead.

“He’s a football addict,” former Alabama offensive line coach Mario Cristobal, who is now the head coach at Oregon, has said. “I mean that in a good way.”

It’s this obsession and drive for greatness that could make Williams the first offensive lineman taken in the NFL draft. The New York Jets are believed to be interested if they trade down from No. 3. The New York Giants are an outside possibility with the sixth pick. Williams met or visited with both New York teams. He also met or visited with the Arizona Cardinals, Buffalo Bills, Cincinnati Bengals, Jacksonville Jaguars, Detroit Lions and Washington Redskins — all teams with top-15 picks.

Williams is competing with Washington State’s Andre Dillard and Florida’s Jawaan Taylor to be the first offensive lineman off the board. It’s a competition he admittedly wants to win.

What separates Williams is the approach and preparation he believes have helped make him the draft’s top tackle. Who else created a spreadsheet for each opponent he faced the past few years at the college level? This commitment floored Williams’ idol and future Hall of Famer Joe Thomas.

“It’s genius,” Thomas said to ESPN when told of the spreadsheets.

This was Williams’ way to take his preparation to the next level, considering he was already taking notes on his opponents and making qualitative statements based on the observations. But that wasn’t enough. Williams wanted quantitative information about the edge rushers he would be facing each week.

So he started charting four of five moves for each opponent (bull rush, spin/swim, chop/dip, etc.) in an Excel spreadsheet. Williams estimates it comprised about 90 percent of what the other players did on the field. He would list every time they did each move and mark whether they won or lost on that particular rep. The spreadsheet has a “LOSS/WIN” column on the far right side.

This gives Williams an opportunity to calculate the percentage of how often his opponents execute each move, and how often they win. Enter the spider chart, which summarizes the results for each opponent.

“So I can have a different approach to a move a guy does 60 percent of the time, but I’m not even really going to prepare for it that much if it never wins,” Williams said. “But then if he does a move five times but has a 100 percent win percentage, I better be ready for it. He’s going to bring it for me. I better be prepared for it.”

This is similar to what Thomas did (minus the spreadsheet) in his Hall of Fame career with the Browns, when he made 10 Pro Bowls and was a seven-time first-team All-Pro. Thomas kept handwritten notebooks on his opponents after looking at four or five games’ worth of tape on each player.

Thomas said he learned the “kindergarten/elementary school version” of it from veteran linemen Lennie Friedman and Hank Fraley when he entered the league. He’s never heard about anybody being as advanced as Williams at the college level.

“It just shows you his level of preparation,” Thomas said. “It says a lot about the success he will have at the next level, because that is the type of preparation you need to have to be able to gain an advantage over your opponent. I wasn’t that advanced when I was in college.”

Williams does it all with a purpose. He even went as far as having the scout team mimic the move of choice for that week’s opponent; that way he could develop a successful plan of attack.

More often than not, Williams can find a tell on tape that tips off the move. If not, he still wants to be ready. Williams is a big believer in the idea that if he drills something relentlessly, it eventually becomes muscle memory.

“I’ll look for tells. I’ll look at his feet. Sometimes guys put their inside foot up if they want to be able to make a move on their third step. Things like that. Little tells,” he said. “His balance. Sometimes guys, if they’re about to do a move, it’s almost like being a receiver, they’re going to head-fake the other way and kind of overexaggerate that.

“Sometimes if there are five reps and [I] can’t find any similarities, I’ll just keep focusing on it and drilling it and thinking how I’ll beat it.”

Deep down, through all the studying and analytics, Williams is still a bring-your-lunch-pail football player. He just wants to effectively block whatever is put in front of him on a given day.

He did that on the college level. That is why he’s near the top of the conversation for first offensive lineman off the board in the draft Thursday night.

It’s the NFL draft. No matter how well Williams did in individual meetings, visits and workouts, prospects are poked, prodded and nitpicked. For Williams, it’s been his 33 5/8-inch arms and a handful of snaps in the BCS National Championship against Clemson. Ideally, NFL teams would like a tackle’s arms to be at least 34 inches. Thomas knows well. He was in the same boat, even though it didn’t show on the field.

If only Williams’ fingers were a bit longer, his arm length would be the same. It’s the silliness of the process.

“To be quite honest, I’m tired of hearing about [arm length],” Williams said. “I don’t think people are going to be talking about it in a month. It will be about what can I do for the team that drafts me.”

Whoever takes him will do so because the team saw a productive and dominant player. That’s of utmost importance come Thursday. 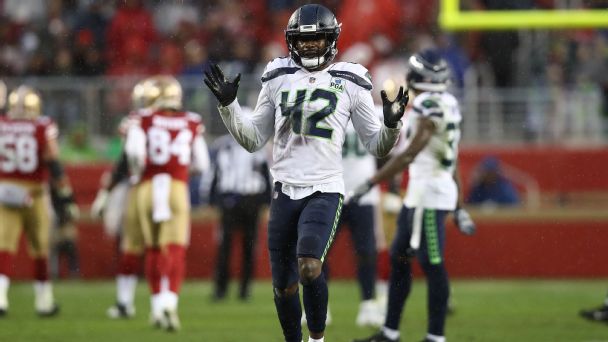 There is no doubt about his dominance. He started 44 games at Alabama, allowing five sacks in three years as a starter. Four of those five came in his freshman year. He allowed zero as a junior this past season and just 12 pressures on 466 snaps, according to Pro Football Focus.

Williams began his collegiate career as a right tackle, where he started 15 games as a true freshman. He played his final two seasons at left tackle. He’s being projected as a left tackle, right tackle or guard in the NFL. The teams that need tackle help have viewed him as a tackle. Those that are set at tackle primarily told Williams they were looking at him as a guard who could later slide to tackle.

“People are trying to typecast him. Jonah is a left tackle, the way he moves and everything,” offensive line scouting and development consultant Duke Manyweather said. “People are trying to pick him apart. They are trying to say what he can’t do. You have to look at his body of work and what he can do — that is 99.9 percent of the time he’s winning. Not only is he winning, he’s making it look easy.”

As Williams noted, he did it in the SEC and against Clemson every year. He’s been tested by top competition.

Manyweather compared Williams to Green Bay Packers left tackle David Bakhtiari, who was an All-Pro this past season at left tackle.

Williams’ preference is to remain at left tackle. The competitor in him dictates as much.

“When you dedicate your life to something and spend 18 hours a day honing in on it and then someone tells you you can’t do something because your arms are 3/4 of an inch too short? It just pisses me off,” Williams said. “Who are you to say that about me after me dedicating my life to this?”

But once Williams is drafted, he will do whatever is asked, without a peep. After all, he’s an offensive lineman.

“I just want to be playing,” he added.

That’s what he is most comfortable doing. In the meantime, he will be sweating and squirming while waiting for his name to be called.

It won’t be natural. Williams doesn’t like his fate in the hands of others. He already experienced that during awards ceremonies this year and didn’t like it. This is a situation he can’t control, and it matters to a competitor like Williams that he’s taken ahead of Dillard, Taylor and the rest of the bunch. That would be validation that all his hard work made him the best tackle in the draft.

“If I don’t end up being that, I’m going to be pissed to myself and say, ‘All right. Whichever team picks me is giving me an opportunity to prove whoever wrong and come win games with their organization.’

“I’m excited just to go do that. I’m not going to whine and complain about things I can’t control. I’m just going to get to work and play the sport I’m drafted to play. That is what it’s all about at the end of the day. All this other stuff is hoopla.”

Back to all the practice, film work and spreadsheets.