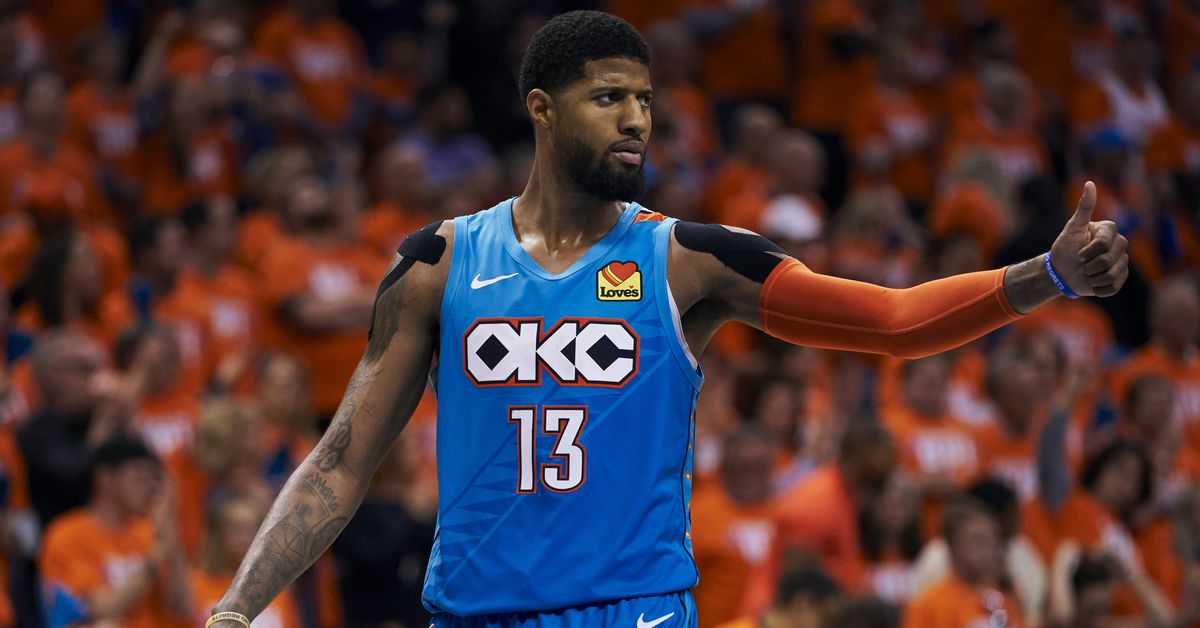 As I wrote in Saturday’s NBA newsletter, the Blazers vs. Thunder series is extremely tense. There’s been a good bit of chatter between the teams all season, stemming from Russell Westbrook’s claim that he dominates Damian Lillard, which isn’t entirely true. We’ve seen a bunch of technical fouls, chippy plays, staredowns, and taunting. Of all eight NBA playoff series going, it’s the most chippy, which is amazing considering a different series features all of Patrick Beverley, Draymond Green, and Kevin Durant.

Paul George did not calm the tension with what he did as the final buzzer sounded on the Thunder’s Game 3 victory on Friday.

George finished the dunk as the buzzer sounded, so the meaningless bucket didn’t count. That could suggest it was truly meaningless: there’s no record of it in the box score or play-by-play. In NBA records, the play does not exist.

But we all saw it. (For the record, I cackled.) The Blazers saw it. They were mad. The Basketball Gods saw it. How will they react?

The case against the dunk

Are there any reasons as to why George should have dribbled out the clock or thrown the ball into the air? Well, the Blazers certainly don’t need any further motivation to beat the Thunder in Game 4, not after Russell Westbrook’s several attempts to rock an invisible baby to sleep or after Dennis Schroder mocked Damian Lillard’s watch-tapping celebration in Damian Lillard’s face. George’s petty dunk just adds to the list of reasons for Portland to lust for OKC embarrassment.

Also, George is supposedly nursing a sore shoulder. (Hence the entire roll of kinesiology tape on his back.) George has been downplaying it in interviews, but it would help his lore if his injury were believable — he could score some low-level Willis Reed points. Pulling off a meaningless but impressive dunk pretty much destroys that opportunity.

There is also the matter of the Thunder having relatively little to taunt about: they were embarrassed out of the first round last season and lost the first two games of this series. OKC hasn’t won a road playoff game — let alone a series — since Kevin Durant left. Aim higher than winning Game 3 at home to avoid a sweep or gentlemen’s sweep against a team starting Enes Kanter, guys!

Finally, this is a half-measure. The dunk came at the buzzer and didn’t count. All truly petty last-second buckets should count. Do that with 0.6 seconds left and make the Blazers come back all the way down the court to inbound the ball. If you’re going to do it, really rub it in. A petty dunk that doesn’t actually count isn’t that petty after all.

The case for the dunk

George gets a lot of style points for the dunk choice. The reverse double pump is high on the Disrespectful Open Court Dunks list. Here is that list.

Paul George probably can’t pull off a 360 at his size and exhaustion level, and the pass from Felton led him just enough that the reverse double pump was the obvious choice over anything else. That said, George made the decision to go for it. He committed. That’s commendable.

In that sense, this isn’t a half-measure despite coming at the buzzer and not counting on the scoreboard. George didn’t hesitate in any way to avoid getting the dunk off in time to count: he just moved naturally. Had the play occurred with another half-second on the clock, he would have achieved the maximum disrespect. This wasn’t his fault. He didn’t slow-roll the petty. The petty happened on its own schedule.

Paul George’s decision to dunk at the buzzer was ethical and the Basketball Gods should reward him for doing the right thing.