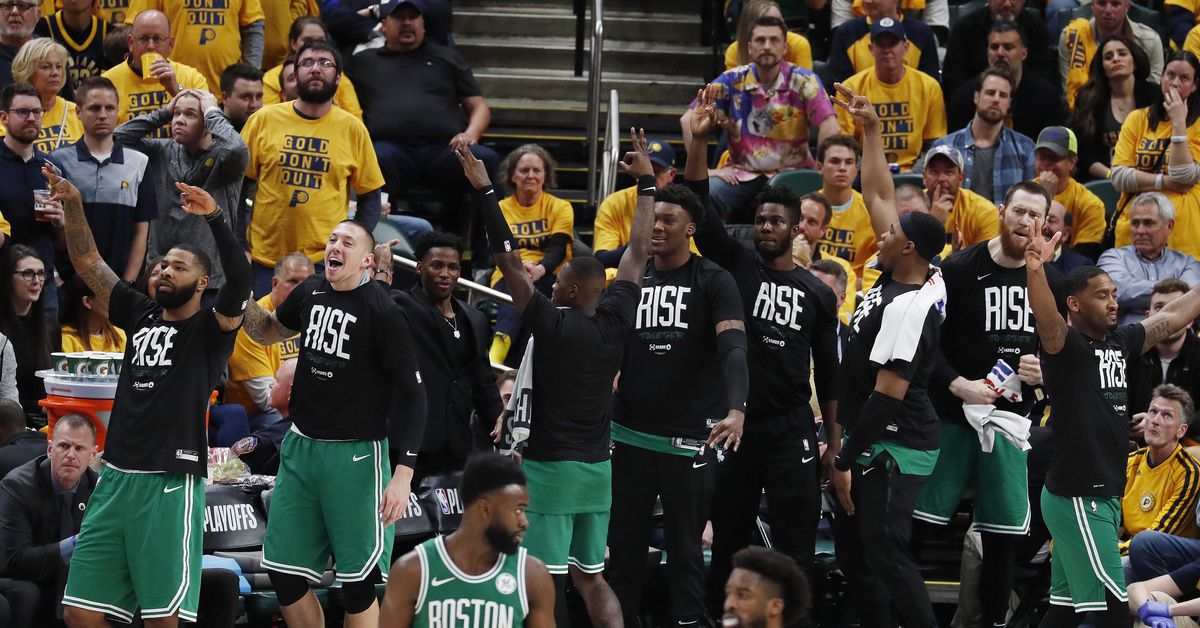 1. The Celtics got to a commanding 3-0 series lead behind a combination of good offense and defense in both the first and third quarters. In each frame, Boston got themselves great looks, while holding Indiana in check. This included a tremendous defensive effort in the third quarter, when the Pacers scored just 12 points.

2. At the start of the game, Boston was making an effort to play through Jayson Tatum. This was an example of Brad Stevens going back to what worked in last year’s playoffs: hunting the opponent’s weakest defender. In this case, it was Tatum against Bojan Bogdanovic and it resulted in Tatum getting off to a great start with six points in the first quarter.

3. The Celtics other young, burgeoning star had quite the game himself. Jaylen Brown was a perfect 4-of-4 from the floor to start the game, including 3-of-3 from behind the arc. Overall, Brown finished with 23 points on a nearly-perfect 8-of-9 from the field.

BRown got a lot of these looks simply by shooting over the smaller Darren Collison. The Pacers opened the game with Wesley Matthews guarding Kyrie Irving, which put Collison on Brown. Brown has somewhere between five and seven inches on Collison, who is simply too small to bother Brown’s jumper.

4. Unfortunately for Boston, an old bugaboo popped up: the second quarter. After looking like they had moved on from the “play a great first quarter followed by a terrible second” as the season would down, the Celtics had a lot of struggles heading into halftime in Game 3. Boston’s offense struggled, going just 6-of-16 in the second period. But the real letdown was the defense. The Pacers continually got in the paint for finishes at the rim, or they kicked out to open shooters. By the time the break came, Indiana had a 61-59 lead.

5. In the third quarter, the Celtics defense locked in as Boston took control of the game. The Pacers shot just 5-of-24 in the third, including only 1-of-9 from downtown. A lot of that was keyed by Kyrie Irving playing with great effort and making it hard for Indiana to get into sets. When Irving is focused, the Celtics have a championship-level defense, and that will go a long way to determining just how far Boston goes in these playoffs.

6. The Celtics offense wasn’t anything special in the third quarter, but it was enough. One play that stood was Tatum and Brown linking up. Both young players do nice things here. Tatum executes a tough pass to the opposite sideline, while Brown shows good patience to get the defender off his feet before knocking down the three-pointer:

7. One more clip of Tatum against Bogdanovic. When Tatum goes deep in his bag of tricks like this, not only does Bogdanovic not have a chance of guarding him, no in the league could guard him either:

8. Tatum and Brown got the Celtics to the fourth quarter with the lead, but it was Irving and Al Horford who put the Pacers away. Multiple times down the stretch in the fourth, Boston went to Irving and Horford actions. The Pacers talked about trapping more to get the ball out of Irving’s hands, but Irving was more than happy to play the role of the passer, as he had 10 assists. In the fourth quarter, two of those helpers found Horford on back-to-back plays, as the Celtics opened up a seven-point lead with under three minutes to play.

9. And when the Pacers weren’t running a double at Irving, he was breaking down defenders off the bounce. Cory Joseph is a good defender, but he has no chance on this island against Irving. Also, take note of the Indiana personnel. They had downsized to match Boston, which left no rim protector on the floor. The closest thing is Domantas Sabonis, and he can’t help off Horford in the strongside corner. This is almost too easy for Irving and the Celtics:

10. Boston has gotten to a 3-0 series lead, but can’t be satisfied. Indiana will likely come back with one of their best efforts of the year in Game 4. They’re desperate and no team wants to see their season end in a sweep on their home floor.

That said, if the Celtics can get the Pacers down early, the lure of the summer gets hard to overlook. Boston should play free and easy, but also push to close this series out in four games. Given the team’s bumps and bruises, it would be good for them to get the extra rest days before the second round.