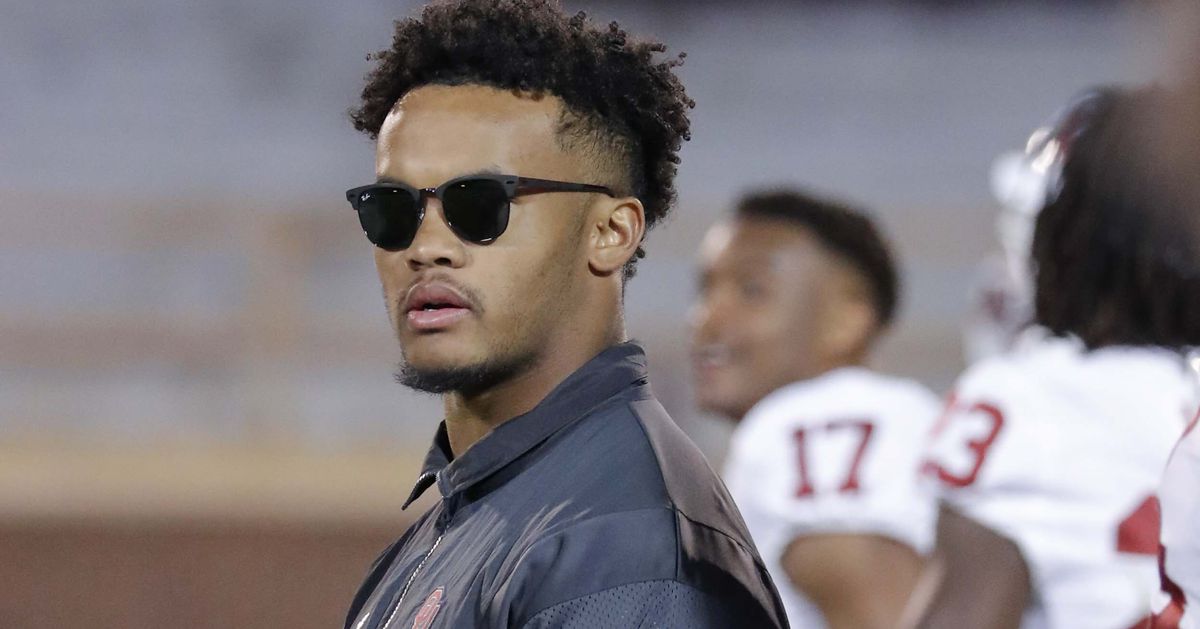 The 2019 NFL Draft is right around the corner, which means rumors are starting to ramp up.

To make better sense of them, we put together a BS detector for some of the hottest rumors floating around the league. Sometimes, there’s enough information to piece together what’s true, and what doesn’t pass the smell test, for teams picking early in the draft.

Here’s how we’re judging the biggest rumors leading up to the NFL Draft.

The latest: Peter King reported he doesn’t believe the Cardinals are all on the same page when it comes to selecting Murray. Even Steve Keim says they haven’t made up their mind yet:

Cardinals GM Steve Keim:
“We are not done with this process. We have not made a decision on the number one overall pick.”

Daniel Jeremiah recently tweeted he was losing confidence that Murray was going to be the first pick in the draft because he has taken visits to other teams like the Giants and Washington.

But it’s a little hard to believe, considering the Cardinals have had months to think about their decision and there’s been too much steam on the Murray-to-Arizona train to back off now. Let’s connect some dots.

If the Cardinals don’t end up picking Murray first overall, this entire draft process would be one HELL of a smokescreen. Usually, where there’s smoke there’s fire — all signals point to Murray being the No. 1 pick.

The Arizona Cardinals will not draft Kyler Murray

Rumor: Pete Prisco proclaimed that the Cardinals will not draft Kyler Murray in the NFL Draft.

Here’s what Prisco has to say about the Cardinals going in a different direction with the first pick in the 2019 NFL Draft:

“Initially, the ownership pushed for Kyler Murray. That much I know, I was told that. The reason they did it, they were having a hard time selling tickets. They put it out there, Arizona was lukewarm to it, so now all of a sudden, they’re pulling back, from what I’ve been told, they’re going to go in a different direction. They’re not going to draft Kyler Murray.”

Based on everything that was listed in the previous Kyler Murray rumor, this seems unlikely. We should very much expect Murray to be the first pick in next week’s draft. Cardinals general manager Steve Keim says that Arizona hasn’t decided yet, but with the draft just a few days away, that’s not likely either.

Dwayne Haskins could be the fourth quarterback off the board

The latest: Peter King said that Dwayne Haskins is “sinking” and he might be the fourth quarterback taken in the 2019 NFL Draft.

With all the Murray smoke, it’s safe to say Haskins won’t be the first quarterback off the board. That’s not a surprise to anyone.

After Murray, there are three quarterbacks who have first-round potential. Haskins, Drew Lock, and Daniel Jones could all end up getting drafted on Day 1. It’s conceivable Lock could be drafted before Haskins — he has the size and arm strength that teams fall in love with, even if his overall game isn’t that polished yet.

Jones getting drafted before Haskins seems like a bit of a stretch, even for NFL teams. Jones wasn’t a productive player in college and he never really brought Duke football into the spotlight. Sure, Duke is never going to be a football juggernaut with its middling recruiting classes, but a first-round quarterback should be able to overcome that to a degree.

The Giants have brought Haskins in for a visit recently. Head coach Pat Shurmur, VP of player personnel Chris Mara, and assistant general manager and VP of football operations Kevin Abrams were on hand for his pro day. It appears that the Giants do have legitimate interest in Haskins, so they could be eyeing him with the sixth overall pick or with a move up from 17th overall — the pick they acquired from Cleveland in the Odell Beckham trade.

In our latest mock draft, Dan Kadar has Haskins going 11th overall to Cincinnati. Our mock draft database has Haskins as popular picks to the Dolphins and Giants.

Haskins is a safe bet to be the second or third quarterback off the board. Him falling behind Jones would be a draft-day stunner.

For what it’s worth, King recently noted that he wouldn’t be surprised if the Broncos selected Dwayne Haskins with the 10th pick in the draft, which likely means he wouldn’t be the fourth quarterback selected like King had also speculated.

Quinnen Williams should be off the board before the third pick

The latest: Ian Rapoport recently reported that while Quinnen Williams could be available at the third pick in the draft, he’d be surprised if the Alabama defensive lineman was still on the board. That’d lead you believe that the 49ers would select him second overall — assuming that the Cardinals draft Murray first overall.

Nick Bosa should be favorite for the 49ers considering their roster construction. They traded for Dee Ford this offseason, which gives them one bonafide edge rusher, but they could use another across from him. Bosa only played in three games last year due to injury, but he’s still such an impressive prospect at a position of need for the 49ers.

Also, the 49ers have a logjam of interior defenders right now. DeForest Buckner has developed into an absolute menace at defensive tackle. Arik Armstead is a good player when he’s healthy and Solomon Thomas is a more effective player on the interior as well. All three of those players are first-round picks still on their rookie contracts — adding a fourth might be overkill.

With the way the 49ers’ defense has been built, Bosa or another edge rusher probably makes more sense than Williams. No one should be surprised if the 49ers pass on Williams with the second pick in the draft — even though he should be a monster in the NFL.

More likely, Williams is going to end up on the Jets or the Raiders.

The Dolphins will draft a quarterback early in the draft

The latest: Miami has done its homework on all of the highly touted quarterbacks in this year’s class. The Dolphins worked out Duke quarterback Daniel Jones, Ohio State quarterback Dwayne Haskins, and met with Missouri quarterback Drew Lock at his pro day.

All three of those players could be in contention for Miami. But that doesn’t lock the team in to selecting one with the 13th pick.

The Dolphins are in full rebuilding mode under new head coach Brian Flores — at some point they’re going to pick a quarterback during the 2019 NFL Draft. Where they draft that quarterback remains to be seen, but they do seemed determined on adding one according to Armando Salguero.

Salguero noted that, at the very least, the Dolphins want to upgrade their backup quarterback situation. Ryan Fitzpatrick is entrenched as the starter, but the other quarterbacks on the roster are Luke Falk and Jake Rudock — two former late-round picks on their second teams.

Adding someone who has starter potential at some point in the draft makes sense, and there are a handful of options for them beyond the players expected to go in the first round. Brett Rypien, Tyree Jackson, Will Grier, and Ryan Finley are a few names to watch for the Dolphins.

Since this is going to be multiyear rebuild for the Dolphins, they don’t necessarily need to take a quarterback in the first round. They have a lot of holes on their roster and if they’re treating 2019 as an evaluation year, forcing a rookie quarterback into a bad situation might not be the best idea for them. Especially if they can look to the 2020 draft and get their pick of the litter.

Rumor: NFL Network’s Tom Pelissero said that he’s hearing that Alabama State offensive tackle Tytus Howard could wind up in the first round.

Howard is a hot name leading up to the NFL Draft, but he faces an uphill battle to be a first-round pick. Howard is coming from Alabama State, a Division 1-AA school that didn’t face a high level of competition on a weekly basis. He did test well at the combine, but there are so many highly touted offensive tackles from bigger schools that he might not find a spot in Round 1.

That will likely make it difficult for Howard, who may have to wait until the second day of the draft for that phone call.

If he does end up in the second round, he likely won’t last long. Still, the first round is a bit of a stretch.

The Jets are “determined” to trade down from No. 3

Finally, a rumor that sounds realistic.

Citing multiple sources, Ralph Vacchiano says the Jets are “determined” to trade back from their lofty draft position.

“They seem to really, really want to move down,” said one NFL executive. “Maybe they’re just keeping their options open, but it sure seems like that No. 3 pick is for sale.”

It makes perfect sense, and has been more or less confirmed by Jets general manager Mike Maccagnan — although he played his cards a little bit tighter to the vest.

“We’re very open to potentially moving back from three,” Maccagnan told the New York Post in March. “I wouldn’t envision us moving up in the draft. I think you can rule that one out. If we end up staying at three and taking a player, we think there are some very good players at three. But we’d definitely be interested if another team came with an offer that we felt was worthy of moving out of the spot. We would definitely consider that. Not to say we’re committed to doing it, but we’d definitely be very intrigued by that.”

Last year, the Jets gave up three second-round picks to the Colts to trade up and secure the chance to eventually draft Sam Darnold. It’s not at all surprising that they want to recoup some value.