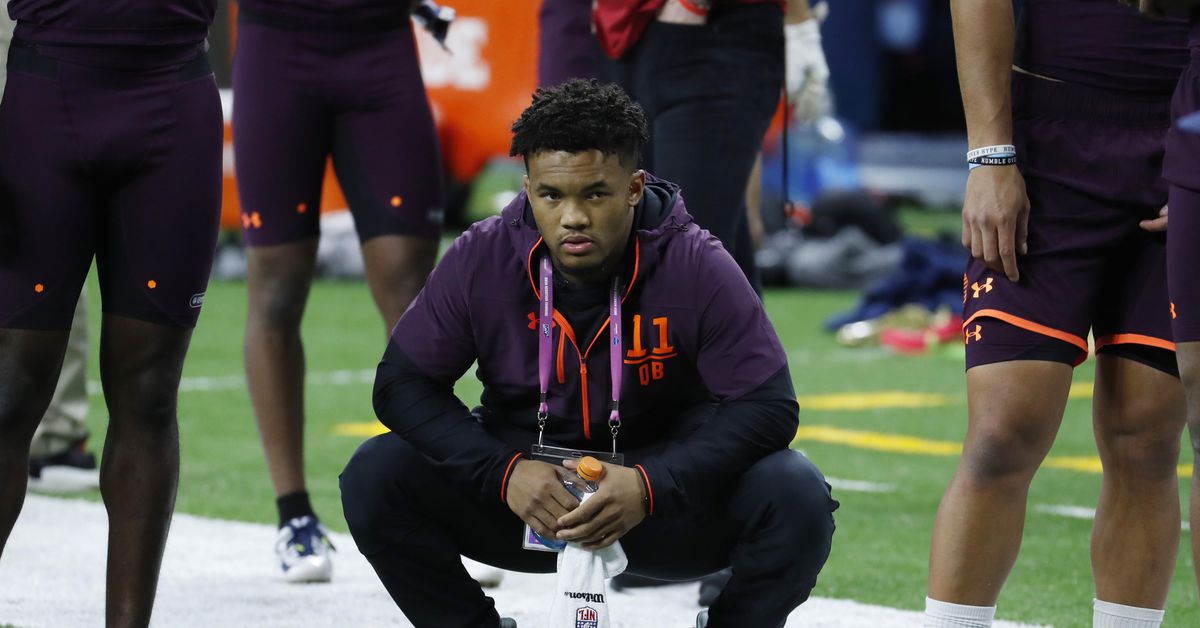 The NFL Draft is a gold mine for horrible opinions.

Talent evaluators screw up royally every year. Most mock drafts are horribly wrong, and every prospect has both defenders and detractors. There’s no shortage of rumors, and a ton of them are BS.

You probably have an opinion about the 2019 NFL Draft that won’t age well, and there’s a good chance you have one that’ll give you the chance to say “I told you so.” But the truly special takes are the ones so awful you can point and laugh immediately after someone says it.

With the 2019 NFL Draft now less than a week away, here are five of those takes, ranked from bad to worst:

There’s a scene in the movie Moneyball that always stuck with me. If you haven’t seen it, the gist is that Oakland A’s general manager Billy Beane (played by Brad Pitt) captures a bit of magic by dismissing traditional scouting methods and leaning into analytics.

The flaws of the old ways of player evaluation are shown in one meeting when “good face,” “good jaw,” and “ugly girlfriend means no confidence” are used to breakdown potential players to go after.

It’s probably an exaggerated scene, but it gets the point across. And every once in a while a take comes along that makes me think it might not be that exaggerated after all:

If you are an interior defensive lineman who has NFL aspirations, don’t wear a cute single digit or get slick with a lower number. Wear big numbers 97, 78, 99… just makes you feel bigger on tape. I can’t explain it, but it does. Don’t plant those “smaller on tape” subliminals

There’s probably a long list of defensive linemen who wore small numbers in college and did just fine in the NFL. Off the top of my head, there’s the No. 1 pick in the 2014 NFL Draft, Jadeveon Clowney, who wore No. 7 at South Carolina.

If any team gives Houston defensive tackle Ed Oliver — who wore No. 10 in college — a lower grade because of his number, they deserve to miss out on him. Michigan’s Rashan Gary wore No. 3 in college too. Who cares?

4. Kyler Murray’s height was “inflated” at the NFL Combine

Does this count as a take, or is it a report? Whatever it is, it’s certainly silly.

According to Dan Patrick, a scout says Murray’s announced height — 5’10 and an eighth of an inch — at the NFL Combine was a lie. It was “inflated” and “if he refuses to measure at the pro day, it would be telling.”

.@dpshow says that a scout told him that he believes Kyler Murray’s height was “inflated” at the combine.

“If he refuses to measure at the Pro Day, it would be telling.”https://t.co/chCZUAoDIV

The conspiracy theory kept cooking when Murray did indeed skip out on measurements at the Oklahoma Pro Day.

Good luck trying to explain why on Earth the numbers from the NFL Combine would’ve — or even could’ve — been inflated.

3. The Seahawks should trade Russell Wilson and draft his replacement

This take died its rightful death when Russell Wilson got the lucrative extension he so obviously deserved the week before the 2019 NFL Draft.

But for a while there was somehow a debate whether or not Wilson was a player the Seahawks should build around. Banging that drum has been Sports Illustrated’s Andy Benoit, who says Wilson has “never been a top-10 quarterback” and that he’d rather have Jacoby Brissett.

Apparently that shtick is working out for Benoit, because he and his MMQB coworker Gary Gramling had a mind-numbing discussion earlier this month about tossing Wilson on to the trading block and starting over.

If I’m Seattle, if I can get two first-rounders for Wilson, I think I’m doing that.

I would say, in theory, you could transition a rookie quarterback into that approach pretty well and not skip a beat. That brings us back to the money. Why would we pay Russell Wilson $30 million-plus when all we’re asking him to do is run a fairly simple scheme that other quarterbacks can run.

Thankfully for everyone’s sanity, the Seahawks didn’t agree with that take and gave Wilson the lofty salary he’s so obviously worth.

2. Ohio State quarterback Dwayne Haskins is “more of a runner”

ESPN’s Stephen A. Smith has loud thoughts about everything. It’s his job and he does that exact description of the job about as well as anyone out there. He’s reportedly about to get $10 million per year because of it.

It also makes him the most susceptible for having loud thoughts about a topic he knows nothing about. Like when he told everyone that he wasn’t completely sold on Haskins because he’s “more of a runner than a thrower.”

It’s a ludicrous take considering Haskins is the model of a pocket passer who had 4,831 passing yards with the Buckeyes and just 108 rushing yards. It doesn’t mean Haskins can’t run, but Murray had more rushing yards against Alabama in the Orange Bowl alone.

At first, Smith wouldn’t back down on his evaluation.

Haaaaa! Now that’s a good comeback. But we shall see. Haskins wants to throw. I know this. Also know he’s nowhere near the athlete J.T.Barrett was. But I’ve got to see him be that pocket passer that everyone swears he is on the NFL. That’s just ME. We shall see. https://t.co/gtEcW0n0if

But eventually he admitted he had it wrong, and apologized to Haskins for it, calling himself “an ignorant fool.”

With Dwayne Haskins in studio on First Take, Stephen A says he went back and watched the tape, and that he was an ‘ignorant fool’ in his past Haskins analysis pic.twitter.com/AVkIoRocz9

All’s well that ends well, and at least Smith didn’t land in the top spot.

1. Murray is either the No. 1 pick or not a first-rounder at all

Sometimes a quarterback takes a surprising tumble down draft boards. But does anybody believe the scenario Aaron Taylor of CBS lays out could come to fruition? Anybody?

Essentially, Taylor says Murray is a fit for the Cardinals and absolutely nobody else. This, despite tons of evidence to the contrary. For one, the Raiders — owners of the No. 4 pick — have been transparently infatuated with Murray.

“Someone in Indianapolis told me Jon Gruden is the worst poker player in the NFL. He and Mike Mayock can talk all they want about Derek Carr … but I’ll tell you Jon Gruden is very interested in Kyler Murray.” – Peter King on @dpshow

Murray did a private workout with the Raiders and there’s a lot of smoke for there to be no fire. He also had a private visit with the Giants, who have the No. 6 pick.

Jay Glazer of The Athletic also said there’s a healthy market of teams expected to be on the hunt for a trade if the Cardinals don’t swipe Murray right away:

“I see an absolute feeding frenzy from teams looking to trade all the way up for Murray. I just don’t see him dropping past that. But man, if the Cards don’t take him, that No. 2 slot that the 49ers own would probably be the most sought-after slot in a long time.”

The market for Murray at the top of the draft order is hot enough that the quarterback didn’t take a scheduled visit with Washington, owners of the No. 15 pick.

Murray falling out of the first round wouldn’t just be a surprise, it’d be maybe the wildest turn of events in NFL Draft history. The likelier reality is Taylor just had a really silly take.