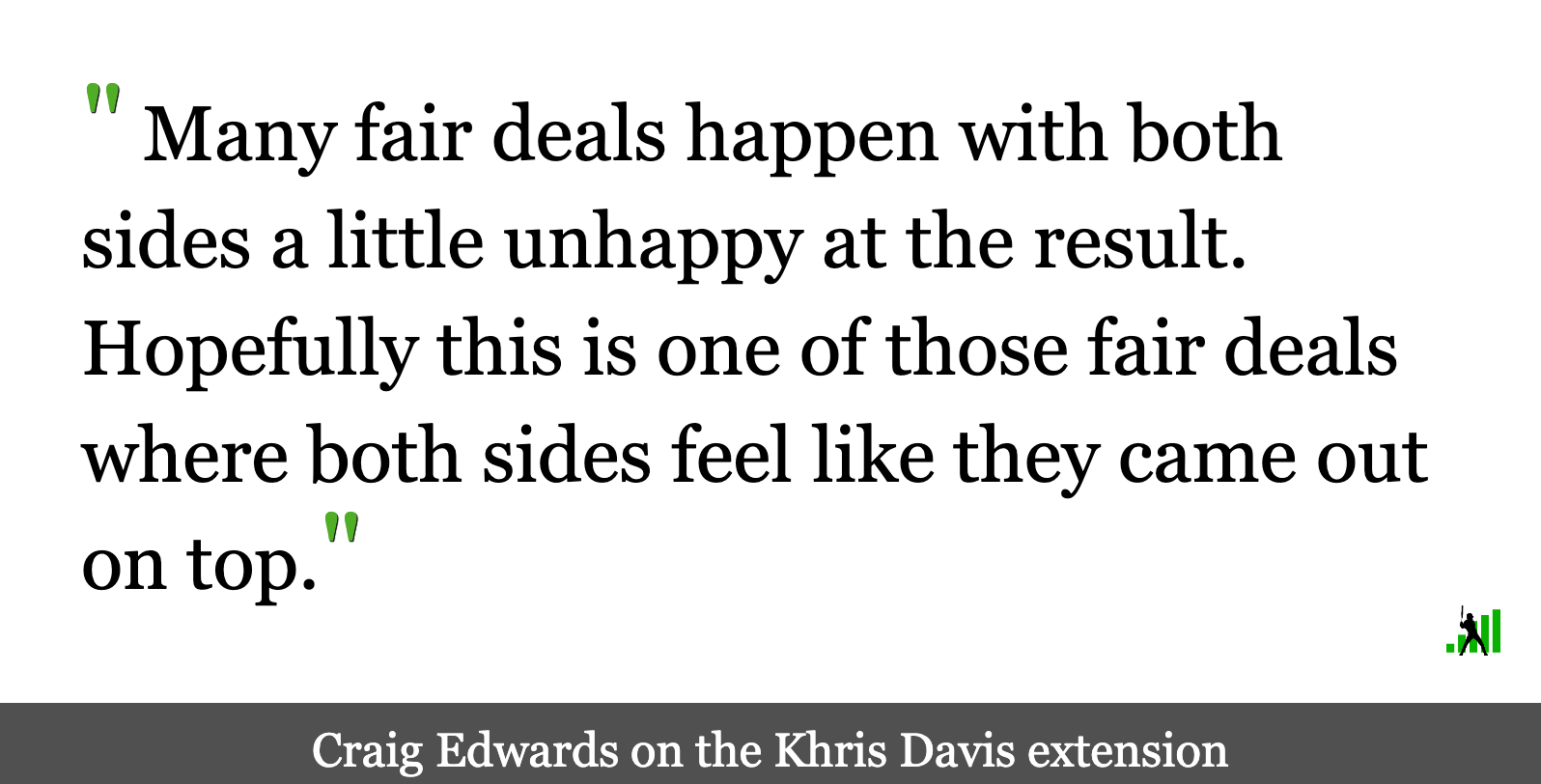 Khris Davis really likes playing for the Oakland A’s. He’s been with the club since 2016, bashing 143 homers with a 130 wRC+ and averaging 2.5 WAR per year, with his value held down only because his best position is designated hitter. Last April, when a contract extension was being discussed, Davis said the following:

“I want to be an Oakland Athletic,” Davis said. “I think I fit in well here. I like the organization, I like the coaching staff, I like my teammates.”

“I’d like to be here. I hope something gets done,” Davis said. “It’s not a good thing being a free agent right now. For my security, it’s going to impact a lot. That’s the way the business is. I’m already 31 so I don’t know if I’m too old. There’s a lot of things that run through my head. Who knows. If it happens, it happens.”

“Shoot, I want to stay here at least three more years, but that’s a long time to be an Oakland A. But if anybody can do it, I guess it’s me, hopefully,” Davis said. “I don’t think they’ll trade me as long as we’re doing good. So we better do good so I don’t get traded.”

It appears Davis is getting his wish. Susan Slusser reported that Davis will sign an extension through 2021 that will pay him $16.75 million in both years. Davis is receiving $16.5 million in his final year of arbitration, so he gets a slight raise and another guaranteed season. Assuming he has another good year, he would have been a candidate for a qualifying offer that would likely have been around $18 million. Davis is 31 years old and as a slugging designated hitter, it’s not clear how he would have done in free agency. A low batting average, barely above-average walk numbers, and high strikeout rates kept Davis from the seasons J.D. Martinez had heading into free agency. The lack of a designated hitter in half of baseball would also serve to limit his suitors. Edwin Encarnacion averaged four wins per year for five seasons heading into free agency, though at 33 years old, he is a couple years older than Davis.

So maybe Davis could have gotten a third year in free agency; maybe he would have gotten somewhere close to $50 million or $60 million. But it’s also possible, perhaps even likely, that Davis would simply accept the qualifying offer. Davis’ skillset is one that is paid well in arbitration, and as a result, he has made $32 million over the last three seasons including this one. In the last decade or so, as teams have gained a better understanding of the value of defense, baserunning, and (perhaps a little on the nose in Oakland) on-base percentage, players like Davis have seen their perceived value diminished. Davis is certainly a good player and his WAR totals represent that, but not all 40-homer players are created equal. Ironically, both as a traditional stat and as it famously applies to him, it is Davis’ low batting average that holds his contributions down, as even with decent walk rates, it prevents a good on-base percentage. Of course, Davis might be in the process of turning this entire paragraph on its head.

At the moment, Davis is swinging even more than normal for him, and it has helped him to a league-leading 10 homers as well as a 155 wRC+. His strikeout numbers are down considerably at 20%, though his walk rate is a very low four percent so far this year. He’s swinging and missing at the same rate he has in the past and his chase rate isn’t that much higher than normal. What’s a little different is that he’s swinging at more pitches in the strike zone. He still has troubles getting hits that aren’t homers, as he has just nine singles and a double to go with his 10 dingers. Our depth charts already project Davis will set a career high in homers with 49 and WAR at 3.0. Davis is a good baseball player and assuming some decline in 2020 and 2021, he’ll likely be paid pretty close to his value as a free agent with a slight discount for signing now muted by agreeing to a deal of only two extra seasons.

It’s worth noting that this signing takes another potential free agent off the board for next winter. Back in November, David Schoenfield made a Way-too-early 2019-2020 Free Agent Rankings. He wasn’t wrong about the timing. With Davis’ signing, eight of the top 19 players have been taken off the board.

As for the A’s, the club only had about $25 million committed to 2020 prior to this signing. They probably have somewhere close to $40 million in potential arbitration raises, so no matter what happens this season, Davis’ signing will easily fit in Oakland’s meager budget. I don’t see this deal as a bargain for the A’s, but it isn’t a huge giveaway, either. Davis is happy and will be paid commensurate with his production while Oakland will get to keep their slugger for a few more seasons as they try to contend without spending before they hopefully resolve their stadium issues. Many fair deals happen with both sides a little unhappy at the result. Hopefully this is one of those fair deals where both sides feel like they came out on top.