Cole Anthony’s path to stardom has been atypical even among teenage basketball prodigies. As the son of 11-year NBA veteran Greg Anthony, he has had all the advantages of a privileged upbringing combined with the technological advancements that have made developing elite athletic talent a more meticulous and systematic process than ever before.

Anthony has watched film with Kevin Durant and picked the brain of Kyrie Irving while vacationing in the Hamptons. He started working out with Chris Brinkley, NBA trainer to the stars, after reaching out to him via Instagram. Before he even started high school, he starred in the Nickelodeon documentary Little Ballers, which was directed by his mother.

Anthony has spent four years building himself up into one of top high school players in the country. He is a consensus top-five recruit by every scouting service and was just named MVP of the McDonald’s All-American Game. He is a scoring point guard custom-built to carry an offense from the day he steps on campus.

It is finally time for his college announcement, which will happen on Monday as he decides between North Carolina, Oregon, Notre Dame, and Georgetown. One lucky school is getting an instant impact, one-and-done freshman star as their floor general.

Anthony might not be ranked No. 1 in his class, but it feels like no player will generate more hype as a freshman in the next college basketball season. This is a star player who has always been built for greatness. 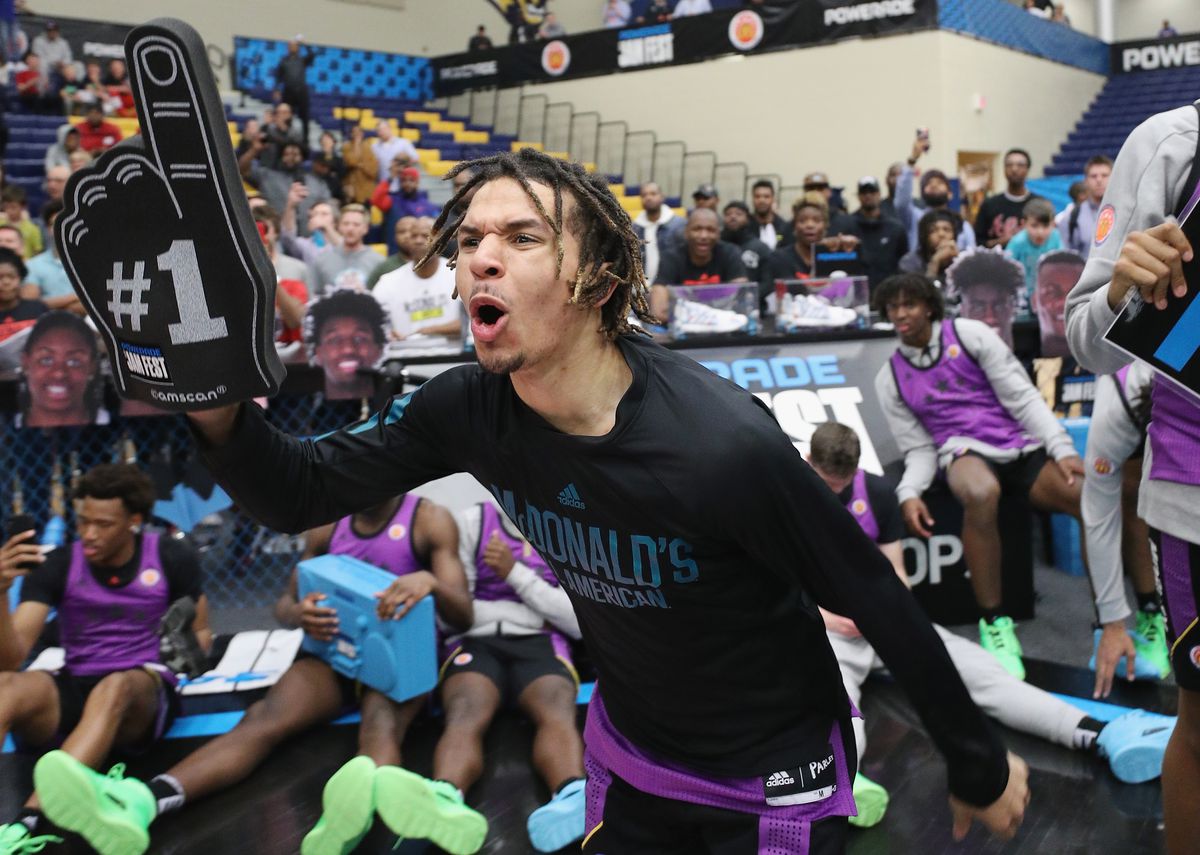 Greg Anthony originally played his college ball at Portland. After winning conference freshman of the year, he transferred to UNLV. That’s where Anthony teamed up with Larry Johnson and Stacey Augmon to form one of the most iconic teams in the history of the sport.

Jerry Tarkanian’s Runnin’ Rebels were a national sensation, playing an aggressive defensive that forced turnovers and pushed the ball relentlessly in transition. Anthony was their floor general, a lockdown defender and crafty playmaker who served as the engine of the team at both ends of the floor. At their best, UNLV was a blitzkrieg that could not be stopped. The Rebels ran through the NCAA tournament in 1990 to win the national championship, blowing out Christian Laettner and Duke by 30 points in the title game. They were undefeated the next year entering March Madness before Duke upset them in the Final Four.

Anthony was drafted No. 12-overall by the Knicks, and quickly made himself a key part of the rotation because of his tenacity as a defender and his skill as a passer. After four seasons, the Knicks left him unprotected in the expansion draft, where he was selected by the Vancouver Grizzlies. Anthony burnished his reputation as one of the great facilitators of his generation by finishing top-five in the NBA in assist rate in the 1995-96 season.

Anthony would ultimately go the Portland Trail Blazers, where he backed up Damon Stoudamire. Five days before the start of an infamous seven-game Western Conference Finals series against the Lakers, Anthony’s wife gave birth to Cole.

Cole Anthony was raised in a Manhattan penthouse and honed his skills with private trainers from a young age, but you’d never know it watching him play. In so many ways, Anthony is the living embodiment of everything a New York City point guard is supposed to be.

Anthony plays with a competitive edge that belies his privilege. He staked his reputation with aggressiveness, developing a complete scoring package built on pull-up jumpers, step-backs, and a fine-tuned knowledge of how to attack out of the pick-and-roll. That doesn’t even speak to his explosiveness athleticism, which has him rising above the rim at a moment’s notice.

This is a point guard who grew up modeling himself after Russell Westbrook while channeling his father’s ability to orchestrate an offense.

“He has top level athleticism and skill,” said Jerry Meyer, recruiting director for 247 Sports. “What separates him is he has a great mind for the game. I think he has a great feel for being an electric scorer while also running the team.”

Anthony played against the highest competition on Nike’s EYBL circuit for three years. In his final season, he was named MVP by averaging 26.9 points, 3.5 assists, 7.6 rebounds, and 1.4 steals per game for the PSA Cardinals, the same program that once groomed Mohamed Bamba. When grassroots season was over, Anthony helped USA Basketball claim a gold medal at the FIBA U18 Americas Championship, where he finished third on the team in scoring (14.4 points per game) and second in assists.

Anthony has only continued to prove himself on the all-star circuit. He lit up the Nike Hoop Summit, scoring 25 points to the U.S. team to a victory.

Anthony has every tool to be projected as a top-five NBA Draft pick a year from now. He has good size (6’3) with elite athleticism. He has shooting ability already developed out to NBA three-point range. He maintains his aggressive edge defensively. He also feels like an ideal fit for a modern game that has placed immense emphasis on creating out of the pick-and-roll.

Those around Anthony say the best thing about his game is that he lives and breathes basketball. He didn’t need the game to be set financially, but he still used every resource at his disposal to build himself into a dynamic leader and bonafide scorer. He’s been considered a blue chip recruit since he entered the basketball consciousness, but he still plays like he has to prove himself every game.

Anthony has taken no shortcuts to get to this point, earning his reputation as a future star on merit, not his NBA genes. With his college decision looming, Anthony is ready for his biggest stage yet.