Dwayne Haskins is the quarterback who could wind up having the best career of any player taken in next week’s proceeding.

The Ohio State product, last year’s third-place finisher on the Heisman ballots, may not be the kind of electric dual-threat talent Murray is, but the strong-armed Haskins could be an immediate fit for a needy team this fall. The architect of the Buckeyes’ passing supernova — he threw for 1,500 more yards in a single season than any other Ohio State quarterback in program history — will be a hot commodity in the top half of Thursday’s opening round.

At 6’3, the 231-pound passer fills out the league’s prototype quarterback build better than the 5’10 Murray, but his credentials go beyond just “average NFL QB size.” He’s got impressive poise in the pocket and the downfield accuracy to drop deep passes into a bucket and turn small openings into big gains. He helped turn two different wideouts — Parris Campbell and Terry McLaurin — into probable Day 2 picks thanks to the most productive seasons of their college careers.

Nearly every team in the league could use a young quarterback like Haskins, but few have the combination of need and draft assets to add him to the fray. Here are five franchises that could find a way to land the Ohio State standout in hopes of making him their offensive cornerstone in 2019 and beyond.

The Giants have a glaring need for an exit strategy as Eli Manning enters his 16th season as a pro. They also have the sixth and 17th picks in this year’s draft thanks to a unwatchable-at-times 2018 season and an even more depressing 2019 offseason that saw Odell Beckham Jr. shipped away to Cleveland. That No. 6 selection seems tailor-made for a quarterback like Haskins, and most mock drafts agree. The Buckeyes passer is the most commonly mocked pick for the Giants’ first choice of the first round, even as rumors have flown about New York not being interested in the top-tier passer: 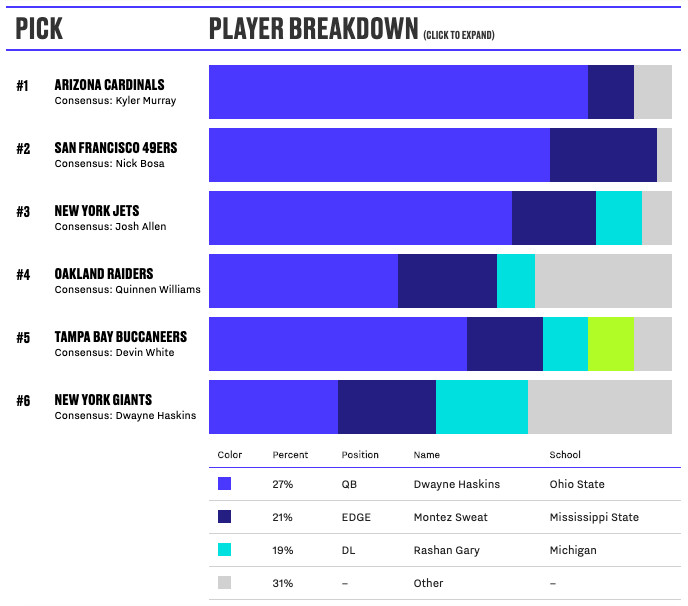 New York needs help on both sides of the ball and could wind up targeting a pass rusher at No. 6, but hoping Haskins slides to the second half of the first round may be a mistake. Picking up a quarterback early would give the team its Manning replacement and wipe the club’s top priority off a huge rebuilding to-do list. It would also give the Giants a player eager to learn behind the veteran Super Bowl winner before taking the reins in 2019 (or earlier).

In a draft loaded with defensive talent, there will still be time to pick up a defensive game-changer at No. 17 — but probably not a franchise quarterback.

The next team up: Denver Broncos

General manager John Elway added 34-year-old Joe Flacco this offseason, but he’s as likely to be Denver’s long-term answer at quarterback as the Shamrock Shake is to become a full-time menu item at McDonald’s. That leaves the Broncos in need of a long-term answer at quarterback, and while Haskins isn’t exactly the kind of player Elway looks for in the draft (i.e. guys who are 6’5 or taller with glaring flaws), he could be an easy selection to make if he slides all the way to the 10th pick.

Haskins would be into it; he even wore an Elway throwback jersey to his pre-draft meeting with the Broncos.

While they’re very different quarterbacks, going to Denver would allow Haskins to follow Lamar Jackson’s path to the NFL. Jackson sat behind Flacco over the first half of the season before moving into a starting role after the veteran suffered an injury in Week 9. Haskins could do the same while he adjusts to life beyond the NCAA, then take over following the Broncos’ inevitable 3-5 start.

Could trade up to ruin both the Giants and Broncos’ day: Miami Dolphins

Brian Flores is about to head into his first season as Miami’s head coach with Ryan Fitzpatrick as his starting quarterback. It may behoove him to pick up a passer whose offseason training regimen wasn’t based around birthday cake.

More than a quarter of the mock drafts out there have the Dolphins selecting their quarterback of the future this spring (sorry, Luke Falk), and Haskins is the most popular pick of the bunch. Miami might be the least hospitable landing zone of the bunch, however, as Flores’ team is headed into a rebuilding year with a premier 2020 pick in its crosshairs. A season playing with a depleted depth chart can be devastating to a rookie passer’s draft stock — see Rosen’s experience in Arizona — and throwing Haskins into the fire in Florida could be a worst-case scenario for his rookie campaign.

Cincinnati ushered in the start of its post-Marvin Lewis era by … re-signing a bunch of his more questionable players (Bobby Hart, C.J. Uzomah, Tyler Eifert). But one major way to show the club is moving on from the past two decades (and zero playoff wins) would be to find Andy Dalton’s replacement. Pushing the Red Rifle out the door isn’t of the utmost importance in 2019, but the Bengals can move on from their longtime starter with no dead salary cap space repercussions in either this year or next.

If new head coach Zac Taylor isn’t convinced Dalton can be a championship quarterback, it may behoove him to find a replacement sooner rather than later, and the 11th pick could be a soft landing zone for Haskins, who’d get the chance to throw to 1,000-yard receivers A.J. Green and Tyler Boyd. But Cincinnati also has several holes to fill along its defense, and that could take priority over a passer this spring.

Basically the Broncos, but in worse shape: Washington

Washington traded a perfectly good cornerback for the opportunity to pay Alex Smith $94 million over four years, only to see him suffer a potentially career-ending injury after 10 mediocre games in the nation’s capital. The club now heads into 2019 with Case Keenum and Colt McCoy atop its depth chart, and even if team president Bruce Allen thinks Keenum is capable of returning to his 2017 form he’s set to hit free agency next spring.

That leaves a lot of ambiguity behind center — a concern that can be cleared up if Haskins slips all the way to the 15th pick. Washington could also trade up if it decides Haskins is the future, but it isn’t exactly flush with assets. Allen has four of the first 96 picks and nine total selections, but Washington also has holes to fill almost everywhere else on the roster — including finding targets for their new 2019 quarterback to throw to, whomever he is. 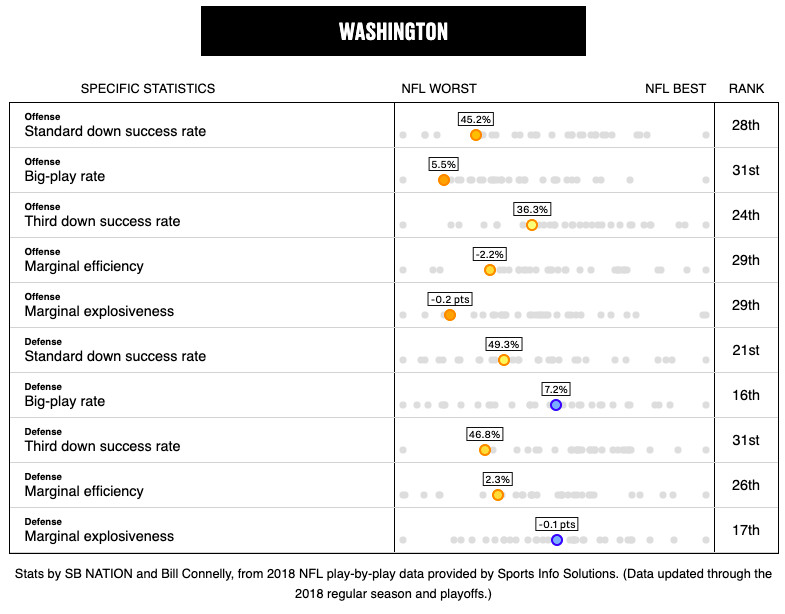 That’s impressively bad, and while Landon Collins was a big free agent addition, the team’s next biggest signing was … right tackle/turnstile Ereck Flowers. Seems like a bad time to consolidate picks for a move up, but Haskins could be good enough to justify such a move.

Bill Belichick loves to swap picks on draft day (and every other day of the year), but he typically uses his trades to slide back in the proceedings and amass mid-round picks he can turn into useful starters in New England. That’s not to say he hasn’t traded up for specific prospects — stars like Rob Gronkowski and Dont’a Hightower have all come under Belichick’s tutelage after he moved up the draft ladder to select them.

The Patriots would have to make a massive leap to move from the 32nd pick and into the top half of Day 1. Fortunately for New England, it’s got the ammunition to make a run at a selection in the 10-15 range thanks to 12 draft picks — including six of the first 101 overall.

The only problem is they need most of those picks to offset this spring’s departures. Trey Flowers, Trent Brown, Malcom Brown, Cordarrelle Patterson, Dwayne Allen, and Adrian Clayborn all left in free agency this offseason. Gronkowski, whose 42-yard catch in Super Bowl 53 set up the game’s only touchdown, decided to retire after nine seasons in the league. The Patriots badly need to reload for 2019, and with Brady still playing proficient football, spending big to get his successor might not yet be in the cards for Belichick.