The release of the NFL schedule has become one of the dumbest things in sports. Entire multi-hour TV specials are devoted to seeing who plays in primetime, and breaking down which teams have the most advantageous bye weeks.

But 2019 was special. It was different. Teams were allowed to have fun on Twitter, and that led to some of the best videos we’ve seen. Some teams took something so boring and mundane and made them magical, others … not so much.

These were so good we can’t stop watching.

Should we REALLY make our schedule release video with stock footage?

Stock footage is mana from heaven, and the Chargers nailed it. The whole thing has this very Tim and Eric vibe to it, which I really appreciate — and it’s so janky it’s good. The Chargers used to be so horrible on Twitter, being mostly first-person accounts of PF Changs. Now they’ve discovered comedy.

Hook this nostalgia directly to my veins. Mortal Kombat II is on point. I love the Tony Hawk’s Pro Skater goof. If you’re a child of the 70s, 80s, or 90s, this is a beautiful, wonderful thing and I love every second of it.

Atlanta Falcons — Game of Thrones, with a jab

Several teams went with a Game of Thrones aesthetic (more on those later), but nobody did it better than the Falcons because of one core moment, which happens 40 seconds in. 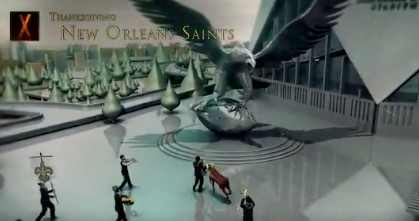 Why yes, that is a Ram, obliterating a member of a marching band presumably playing “When the Saints Go Marching In”, and, yes, that is a referee running in and waving off the penalty as an ode to the NFC Championship game. It hits such a specific nerve that it’s beautiful.

I appreciate the self depreciation of Browns’ general manager John Dorsey to log onto his America Online account, printing it off on one of those printers that makes a horrific whining sound like the shriek of a banshee, and pinning it to his wall.

I like that the bye week is a trip to Pizza Hut. Nice touch.

Jacksonville Jaguars — As seen on TV

Maybe not the nostalgia I was looking for, but I can get down with this.

I appreciate the effort in finding all these clips.

A solid effort. Went on just a little too long for a single conceit.

Chicago Bears — 100 years in the making

There is absolutely nothing about Jerry Jones saying “Let’s Go Cowboys” in ASMR that I ever want to think about ever again.

People freaked out because Josh Rosen wasn’t featured at all in this and it was so bad the team had to issue a revision. Welp.

I love the idea. The execution just isn’t there. This could have been special, but, alas …

There is nothing memorable about this. Sorry, Saints.

Schedule’s out, YOU IN?

Cincinnati Bengals — Mascot on a scooter

THIS was the best y’all could come up with?