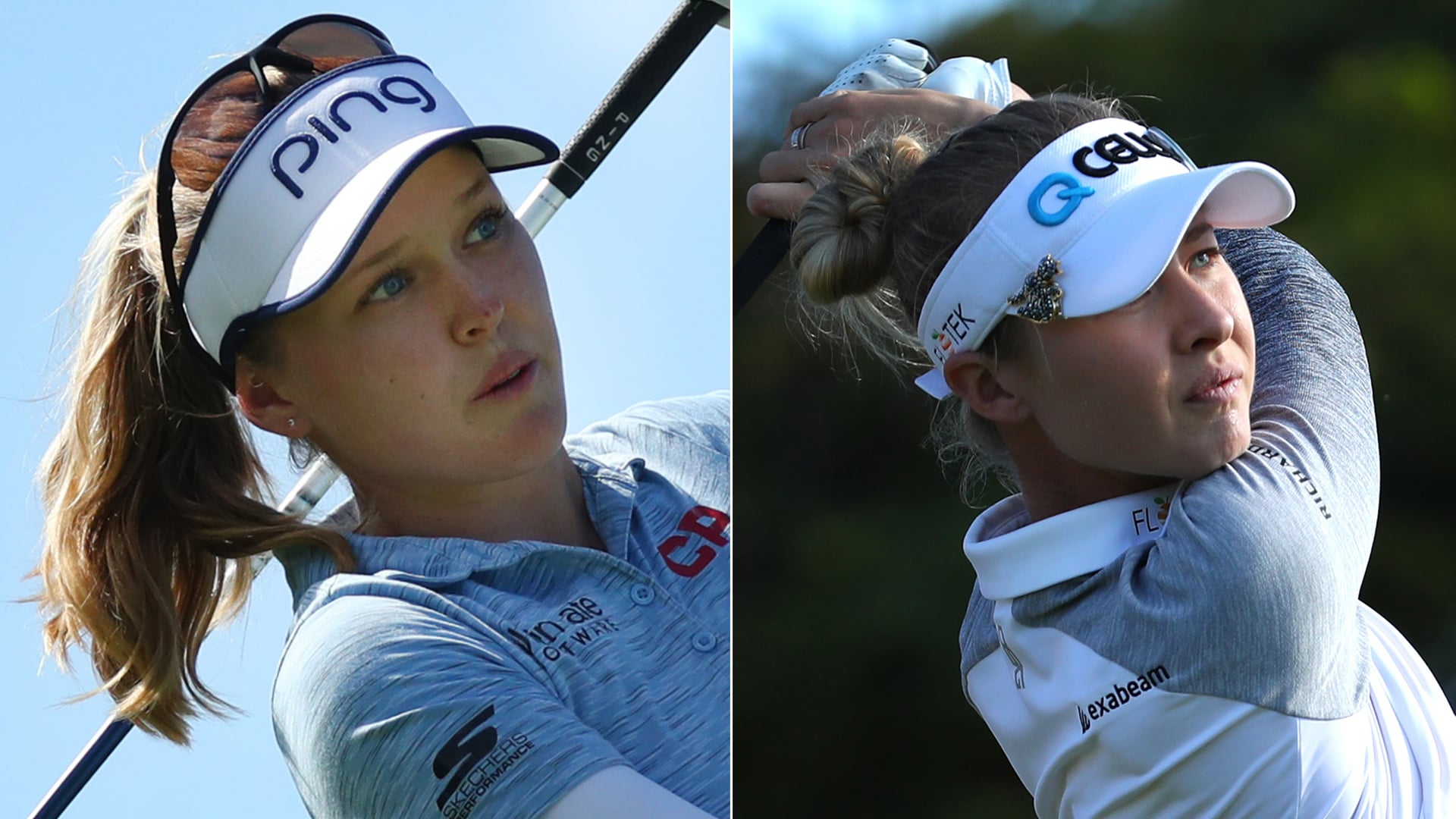 The blonde bombers intrigue atop the leaderboard in Hawaii.

Two of the best drivers of the ball in the women’s game and two of the most prolific birdie machines put on a show Wednesday in Golf Channel’s primetime coverage of the opening round of the LPGA’s Lotte Championship.

Nelly Korda took the lead with a bogey-free, 9-under 63.

Brooke Henderson opened with a 65 in defense of her title, with six birdies, an eagle and one bogey.

They both played in the late wave.

Henderson and her sister/caddie, Brittany, came up with an aggressive game plan.

“We took a look at the scores early and were like, `Wow, people are really going low,’” Henderson said. “I figured the wind was down a little bit, just maybe attack a little bit more.”

Light winds allowed Korda and Henderson to have some fun ripping drives and attacking flagsticks at Ko Olina Golf Club on Oahu. Korda is second on tour this season in total driving, a statistical category combining distance and accuracy. Henderson is third.

“When I got an opportunity, I took it,” Korda said.

Score yet another player inspired by Tiger Woods’ victory at the Masters on Sunday. Korda said she didn’t feel like working out earlier in the week, but . . .

“I had like no motivation,” she said. “And then I thought of Tiger, ‘I wonder if he would be in this position? Probably not. I’m going to go work out.’”

Korda has been in contention just about every time she has teed it up this year. Rolex world No. 1 Jin Young Ko is the only player who has been more consistently on leaderboards. Ko, by the way, can’t be discounted yet again this week, after opening with a 69. She played alongside Korda in the first round.

Korda opened the year with finishes of: 3rd, 1st, 7th, 10th and T-2 before faltering to a T-52 finish in her last start at the ANA Inspiration.

“I didn’t finish too well at ANA, so I kind of made sure I got back to my routines,” she said.

Hawaii’s prevailing winds figure to kick up again as the week progresses. Henderson won navigating through some tough winds a year ago. She was the only player to reach double digits under par for the tournament in 2018, taking the trophy after playing the weekend in 2 under par.

Korda is playing the Lotte Championship for the first time, but she grew up playing in Florida’s winter winds. Still, she was surprised at the condition she faced practicing early in the week.

“I got here Saturday, and I swear I couldn’t even walk, because it was so windy,” Korda said. “But I like the place. Everyone is really friendly and just feels good to be here.”