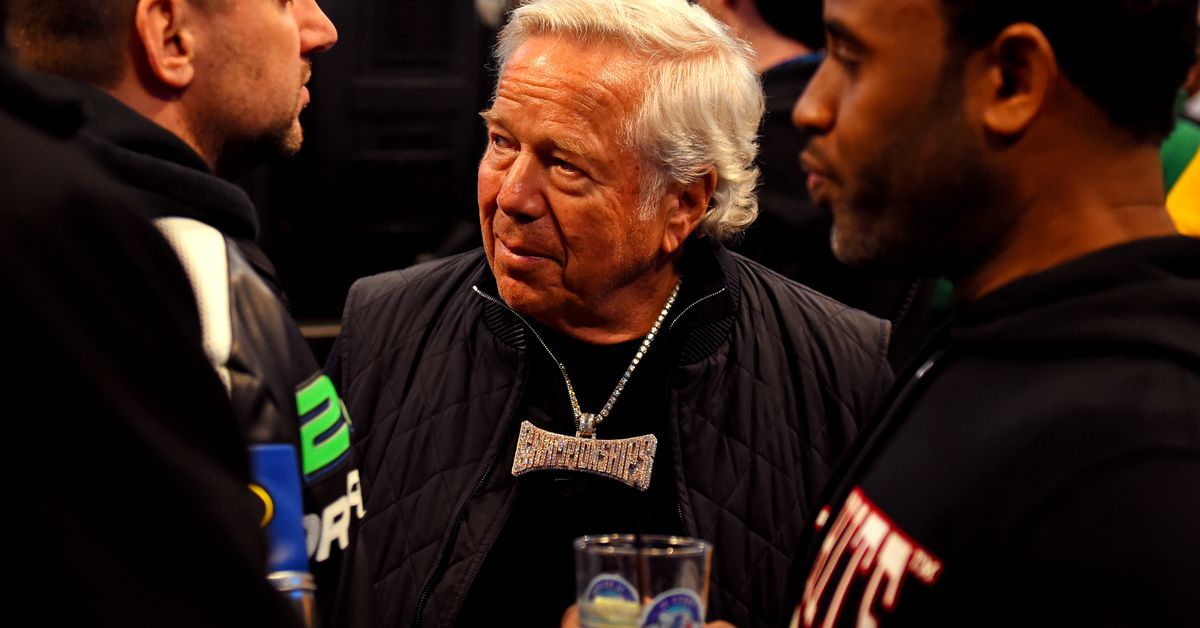 New England Patriots owner Robert Kraft has been charged with two misdemeanor counts of soliciting a prostitute, only weeks after his team won its sixth Super Bowl.

The charges are part of a wide-scale prostitution bust in the southeastern Florida town. Kraft was one of 25 individuals to be observed by police at the Orchids of Asia Day Spa, one of five local institutions under police surveillance for several months. An arrest warrant for the for the longtime Patriots owner, who was reportedly twice caught on camera involved in sex acts at the massage parlor, is expected to be issued Monday. If convicted, he’ll face up to 120 days in jail.

According to police records, one of the days he visited the day spa was the same day the Patriots defeated the Chiefs to win the AFC Championship Game.

Kraft denied the charges in a brief statement released by his legal counsel Friday.

“We categorically deny that Mr. Kraft engaged in any illegal activity. Because it is a judicial matter, we will not be commenting further.”

Through his lawyer, Kraft entered a not guilty plea:

A month later, Kraft maintained the not guilty plea, waived a March 28 arraignment, and requested a jury trial:

From Palm Beach County court records: Robert Kraft waives his arraignment, pleads not guilty to all charges, and requests a jury trial. pic.twitter.com/nMhKztCodd

Kraft and a number of the other men charged were offered a place in a pre-trial diversionary program that would require them to complete several hours of community service, reimburse court costs, and take a series of courses on the dangers and lasting affects of sex trafficking. These charges would be vacated after completion of that program — though it would require Kraft and the other men charged to admit they’d likely be found guilty if the case went to trial.

“The proposed deferred prosecution agreement calls for completion of an education course about prostitution, completion of 100 hours of community service, screening for sexually transmitted diseases and payment of some court costs,” the Wall Street Journal reported.

Kraft opted against that route and decided to take the case to trial instead. He had no intention of taking that deal, preferring to fight the case despite allegedly being caught on camera inside the spa. While he hasn’t admitted guilt, he did apologize to the public in a statement released one day before the league’s annual meeting in Phoenix.

“I am truly sorry,” Kraft said in a statement. “I know I have hurt and disappointed my family, my close friends, my co-workers, our fans and many others who rightfully hold me to a higher standard.”

His legal team is fighting hard to dismiss the prosecution’s videos taken inside the parlor as well. Cameras were installed inside the Orchids of Asia Day Spa in an effort to determine whether human trafficking was taking place. While the county found no evidence of trafficking, it still remains unclear whether the footage, potentially damning to Kraft’s case, will be admissible in his jury trial or released to the public.

“I don’t think there’s interest the state has, or the media has, in publishing it…there’s no need to actually see the video.”

The prosecution wasn’t moved by this appeal and planned to release the videos of Kraft — and the other 25 men charged for solicitation at the spa — to the public in advance of the Patriots owner’s trial. That release was temporarily barred by the judge, whose order prevents the videos from being posted before Kraft’s court date.

What happens to Kraft now?

Martin County Sheriff William Snyder hinted at a major name in a press conference detailing his department’s investigation into a human trafficking ring. That name was Kraft, who owns property in nearby Palm Beach and allegedly had his chauffeur drive him to the spa for the acts that eventually led to his charges. Snyder’s task force has made 165 arrests in a case the sheriff says “go[es] from here to New York to China, in Florida from here to Orange County … I think it’s very safe to say without any hyperbole that this is the tip of the iceberg.”

“They were cooking on the back steps of the business. These women were sleeping in massage parlors, on the massage tables and had no access to transportation,” said Synder, who noted victims averaged eight clients a day. “If you do the math, that is about 1,500 men a year, with no days off.”

Kraft’s solicitation charge typically results in a diversionary program regarding the dangers of prostitution before the charges are then dropped. However, the Patriots owner’s high profile suggests this case could be anything but standard. Even if officials clear his record in south Florida, he’ll still have to deal with the NFL.

What will the NFL do?

Kraft’s arrest, even with the original accusations of his participation in a sex trafficking ring now cleared, is certain to bring down heavy discipline from a league that has been eager to clean up its image. Friday’s charges are a clear violation of the NFL’s personal conduct policy, and will likely lead to a suspension and significant fine.

If that happens, it would make Kraft the first owner to be disciplined since Jim Irsay was arrested under suspicion of DUI and drug possession in 2014. While the Colts owner was given a year of probation from a local judge after pleading guilty to the charges, he was also suspended by the NFL for six games and fined $500,000 for his transgression.

The NFL says it is monitoring the situation and that Kraft’s charges won’t be handled any differently than a player’s.

A new NFL statement on #Patriots owner Robert Kraft’s allegations of soliciting prostitution says the league is seeking “a full understanding of the facts” while not interfering with an ongoing investigation. Here it is in full: pic.twitter.com/8x1XMgen6T

This story will be updated as details emerge.