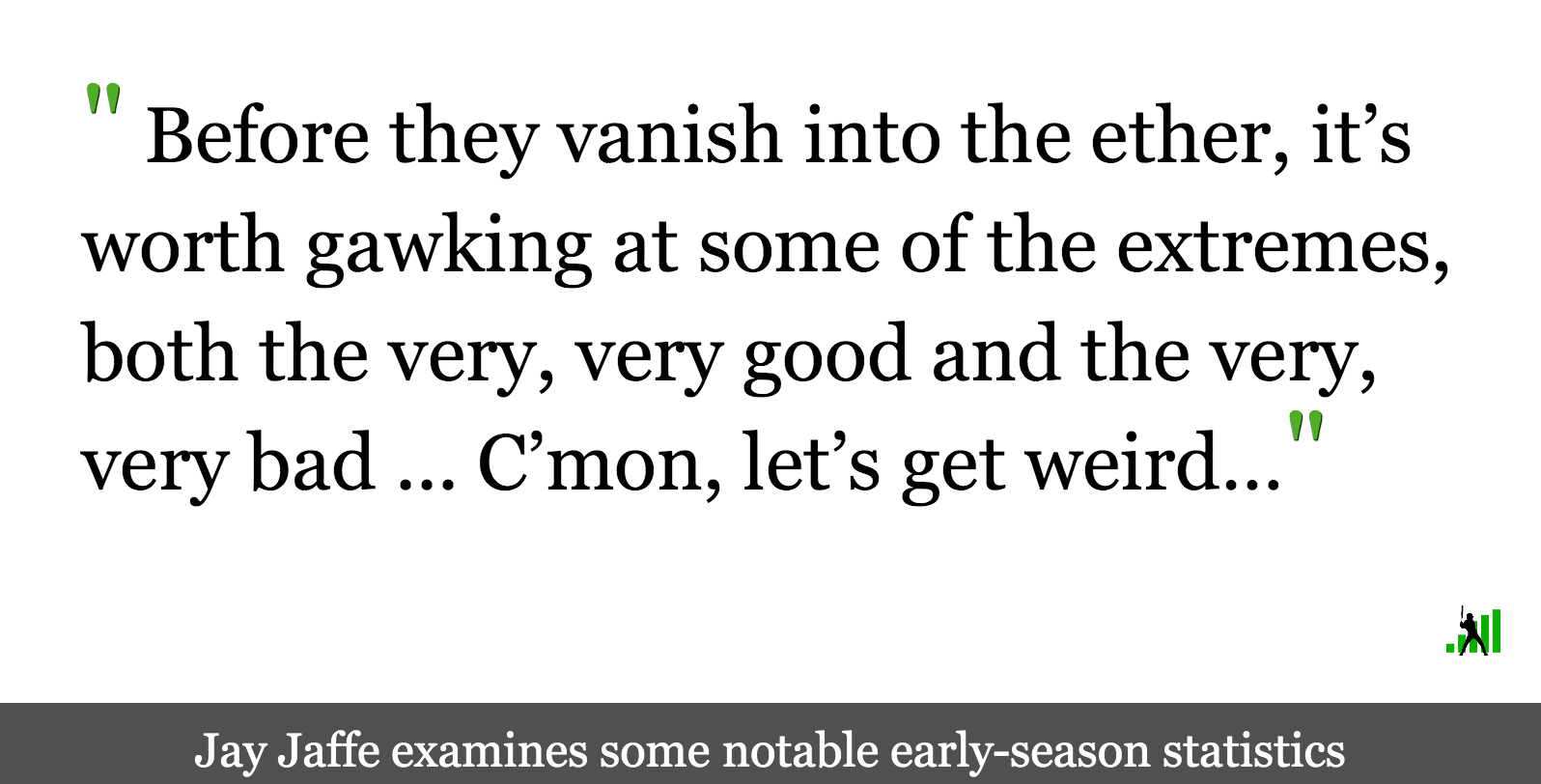 Yesterday, I wrote about how at the team level, won-loss records at the 16-game mark are meaningful when it comes to predicting final records. At the individual level, we’re in small sample theater, however, with extreme and anomalous performances all over the place, virtually all of which will come out in the wash. For most hitters, the only stats that have begun to stabilize are exit velocity (40 balls in play), swing rate (50 plate appearances), and strikeout rate (60 PA), which means that players’ batting lines may contain all sorts of oddities in other categories.

Before they vanish into the ether, it’s worth gawking at some of the extremes, both the very, very good and the very, very bad. Unless otherwise indicated, all stats are through Tuesday. C’mon, let’s get weird…

Over the weekend, Chris Davis ended the longest hitless streak in major league history (54 at-bats) with a three-hit game against the Red Sox, and on Monday, he homered. That binge lifted his wRC+ from -67 — a number that can really only be understood in the Upside Down — to 2, which, well, it’s at least a positive number.

As a left-handed pull hitter, the Mariners’ Jay Bruce has faced infield shifts in nearly half of his plate appearances dating back to the start of the 2015 season. His BABIP from 2015-18 was just .263, the 13th-lowest in the majors, compared to .293 from 2008-14. Bruce’s full-season BABIPs have never fallen below .251, but this year he’s got the majors’ lowest mark by 44 points; just three of the 34 balls he’s put into play have become hits. The good news is that he also has eight home runs, good for second in the AL, and two of his three in-play hits were doubles, yielding a very strange-looking .175/.264/.587 batting line en route to a respectable 124 wRC+.

Entering Tuesday, three qualifiers had yet to draw a single base on balls: Peraza, the Giants’ Kevin Pillar (62 PA), and the Diamondbacks’ Ketel Marte (64 PA).

Pillar is generally every even more of a hacker than Peraza, at least going by O-Swing%; his 40.3% mark from 2013-18 was the eighth-highest among players with at least 2,000 PA, while his 4.2% walk rate was the ninth-lowest. But if he was a bit discombobulated due to the April 2 trade that sent him from the Blue Jays to the Giants, he shook that off on Tuesday night, drawing ball four against the Nationals’ Austen Williams — in just the third plate appearance in which he’s gotten to three balls all season. Meanwhile, the Diamondbacks’ Ketel Marte, who had gotten to ball three seven times, walked twice on Tuesday night, against the Braves’ Chad Sobotka and Shane Carle. That leaves Peraza, all by his lonesome.

Runs batted in is a team-dependent stat, and the fact that the Blue Jays aren’t getting on base very often (.292 OBP, the majors’ sixth-lowest mark) means fewer individual opportunities up and down the lineup. Even so, every Blue Jay to come to bat more than 27 times has driven in a run — and Pillar collected one in his 17 PA before fleeing the country — except for Brandon Drury. Contact has been a real problem for the 26-year-old superutilityman, who has struck out in 41.7% of his 60 plate appearances, the highest mark among qualifiers. According to Baseball Prospectus’ RBI Opportunities leaderboard, Drury has come to bat with 30 Blue Jays on base, the fourth-highest total on the team; seven of those were on second base and five on third. He’s 0-for-20 with two walks and 12 strikeouts with men on, and 0-for-9 with two walks with runners in scoring position. Yikes.

While Chris Davis finally got on the board on Monday, his near-namesake, Khris Davis, is the first player to get to double digits in dingers this year. That shouldn’t be too surprising, given that “Khrush” clubbed an AL-high 48 last year. The latter Davis is the first player to homer 10 times in his team’s first 19 games since 2013, when the Braves’ Justin Upton did so — but Davis did it while sitting out one game earlier this month. According to my back-of-the-envelope calculations, he’s probably not going to maintain his 81-homer pace.

After setting an NL rookie record for homers in 2017 (39) and then suffering through something of a sophomore jinx last year, Cody Bellinger spent the winter working to restore his mechanics to avoid “standing too tall and straight-legged, making it difficult for him to halt momentum once his swing began,” as ESPN’s Alden Gonzalez wrote this spring (see here for a visual). It’s paid off so far. While the 23-year-old-thumper hasn’t been able to maintain his seven-homers-in-10-games pace, he still leads the NL with nine. There’s no all-or-nothing here; he’s got a .408 BABIP and is averaging nearly one total base per at-bat. His .433/.513/.925 line represents the NL’s highest batting average and on-base percentage, as well as the majors’ highest slugging percentage. Thankfully, the 95.5 mph fastball he took to the right knee on Monday, delivered by the Reds’ Luis Castillo, merely bruised him, and he felt well enough on Tuesday to show up in the on-deck circle as a potential pinch-hitter before being called back.

With two straight seasons of at least 40 homers, strikeout rates around 36%, and batting averages in the low .200s, Joey Gallo is a man of extremes. Even with the majors’ second-lowest groundball-to-fly ball ratio in 2017-18 (0.56) — which is to say, a lot of balls in the air — he had the fourth-highest home run-to-fly ball ratio (28.1%) in that span. Thus far, Gallo has hit a lot of balls on the ground by his own standards; his 41.4% groundball rate is nearly 12 points higher than last year, and his 1.33 GB/FB ratio is more than double his mark from the previous two seasons. Nonetheless, of the nine fly balls he’s hit — including a 439-footer on Tuesday night against the Angels — six have left the yard. He’s 20.5 percentage points ahead of the second-ranked Willson Contreras in that department.

Where to begin with Mike Trout’s 2019 performance thus far? I could do an entire companion piece. There’s his 27.6% walk rate (against just an 8.6% strikeout rate), his .569 on-base percentage, his .816 slugging percentage, his 257 wRC+… and so on, though those numbers have taken a dip since a groin injury sidelined him for three games last week. To these eyes, the stat that feels particularly extreme is his swinging strike rate, which is to say the number of times that he swings and misses divided by the total pitches he faces. In eight of his 14 games, he hasn’t had a single swinging strike, while in the other six, he had exactly one. Six swinging strikes so far. That’s a dude who is locked in.