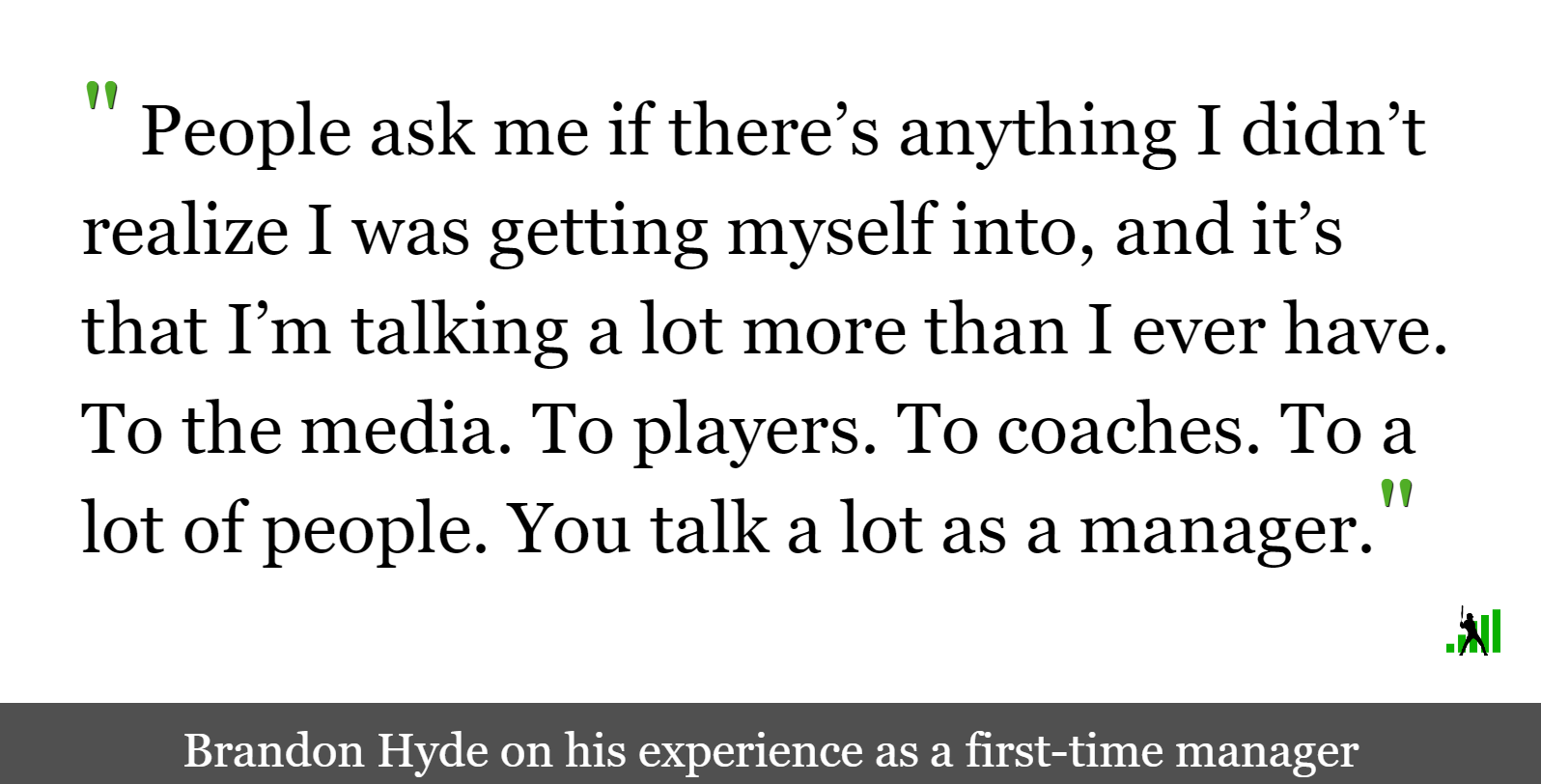 Brandon Hyde is slowing settling into a routine. As a first-year MLB manager, it’s one that includes a number of new responsibilities. The 45-year-old Baltimore Orioles skipper isn’t without experience — he’s served in a variety of different roles, most recently with the Cubs as Joe Maddon’s bench coach — but again, he’s never been at the helm of a big league team. What’s he’s experiencing is a whole new animal.

His day starts long before the first pitch is thrown, and it ends well after the last out is recorded. There are reports and video to go over. There are coaches and front office executives to consult with. There are players to cultivate relationships with. There is a lineup to put together. And as everyone in Hyde’s role knows, there is also the media.

Hyde discussed his daily routine prior to Saturday’s game at Fenway Park.

Brandon Hyde: “I get up, have coffee or tea, and read the news from the night before; I look through world events and sporting events. The baseball news I read is national, because I want to keep up with what’s happening throughout the game. From there I’ll usually try to hang out with my family for a couple of hours before I go to the ballpark. Or, if I’m on the road, I’ll do something like go out to the driving range. I’ll try to do something relaxing.

“I get to the park fairly early. For a night game, that’s around noon-ish, maybe 12:30-ish. The first thing I do is double-check the lineup, which has already been set. That happened the night before.

“Putting the lineup together… I get information from our analytics department — I get it from [Assistant General Manager, Analytics] Sig Mejdal — and there will be a lot more of it as we go along. We’re still kind of bare bones, because there wasn’t [an analytics department] before. Sig is basically starting from scratch.

“So, I get some information from Sig, I talk to our video guys who do run-production and run-prevention stuff, and I usually talk to a couple of our coaches. Then I set the lineup. I actually have tomorrow’s done, kind of scratch, and after today’s game I’ll solidify it. Once I do, I’ll give it to [field coordinator] Tim Cossins. He’ll text it to the players, so that they’ll have it the night before.

“Players appreciate knowing ahead of time if they’re going to be in there. If you do things like that for players… they enjoy playing for you. They enjoy the atmosphere. They know you’re treating them like professionals. When I was in Chicago, Joe [Maddon] would text me the lineup, and I would text it to the players the night before.

“There is a human element to the lineup itself. Maybe you feel like a certain guy needs a rest. I’ve kind of already factored that in, going into a series; I have a good feel for who I’m going to play. Like my two catchers. How am I going to match them up with who our starting pitcher is going to be those nights? But things might change on any given day. Again, maybe the guy needs a breather. Or maybe he’s hitting so well that it’s hard to take him out of the lineup. Factors come into play where you might change your mind. But numbers, splits — predictive numbers that I get from Sig — are a huge factor in how I make out my lineups.

“The first day of a series, we have meetings. I meet with all of the coaches about their areas. I read through our game report. I watch a ton of video. Yesterday, I watched video on Rick Porcello, because he’s going today. I just watched video on David Price, because he’s going tomorrow. I watched our at-bats against their bullpen guys. I watched a lot of their hitters against our pitchers. I also watched some of [Boston’s] last couple of games — the ones before we got here — to get a feel for how they’ve been playing.

“I have daily conversations with [Executive Vice President and General Manager] Mike Elias. We usually talk multiple times a day, so some of them are basically check-ins. Mike isn’t on this trip, so I texted him this morning, and we’ll talk after the game. We talked after the game last night. It’s a real small front office here, so it’s mainly me and him talking about our club, talking about the game.

“I try to touch every single player each day. Whether it’s in my office, walking through the clubhouse, waking around during batting practice… I try to keep a good relationship with all of the players. That goes back to what I was saying about wanting to [cultivate] a good atmosphere.

“There’s the media. I meet the media twice each day — before batting practice, and then after the game. I think it’s gone well so far. I really like the group of media members in Baltimore. I also feel like I’m getting better at it. It’s something I’ve never really had any experience with. People ask me if there’s anything I didn’t realize I was getting myself into, and it’s that I’m talking a lot more than I ever have. To the media. To players. To coaches. To a lot of people. You talk a lot as a manager.

“I watched Joe very closely over the years. The same for the other three managers I’ve been with over the years. That would be Jack McKeon, Rick Renteria, and Edwin Rodriguez. Joe and Jack are incredible with the media. They enjoy talking about the game. They enjoy that pre-batting-practice time. That’s something I’ve tried to take from them, to embrace, and enjoy, that time. Another thing I’ve done is try to be as honest as I can when answering the questions. I think that’s important.

“A few minutes after today’s game ends, I’ll meet with the media again. Once that’s over, I’ll review stuff for tomorrow lineups. I’ll talk to a couple of coaches to get their ideas on it, and like I said, I’ll talk to Mike. That will be over the phone. If he was in town, he’d be in my office.

“I’d say the majority of [post-game discussions] are about what happened in the game, and about any moves we may need to make. Maybe we need another bullpen arm, or maybe there was an injury. Anything team-related. At the end of the day, it’s all about the team.”