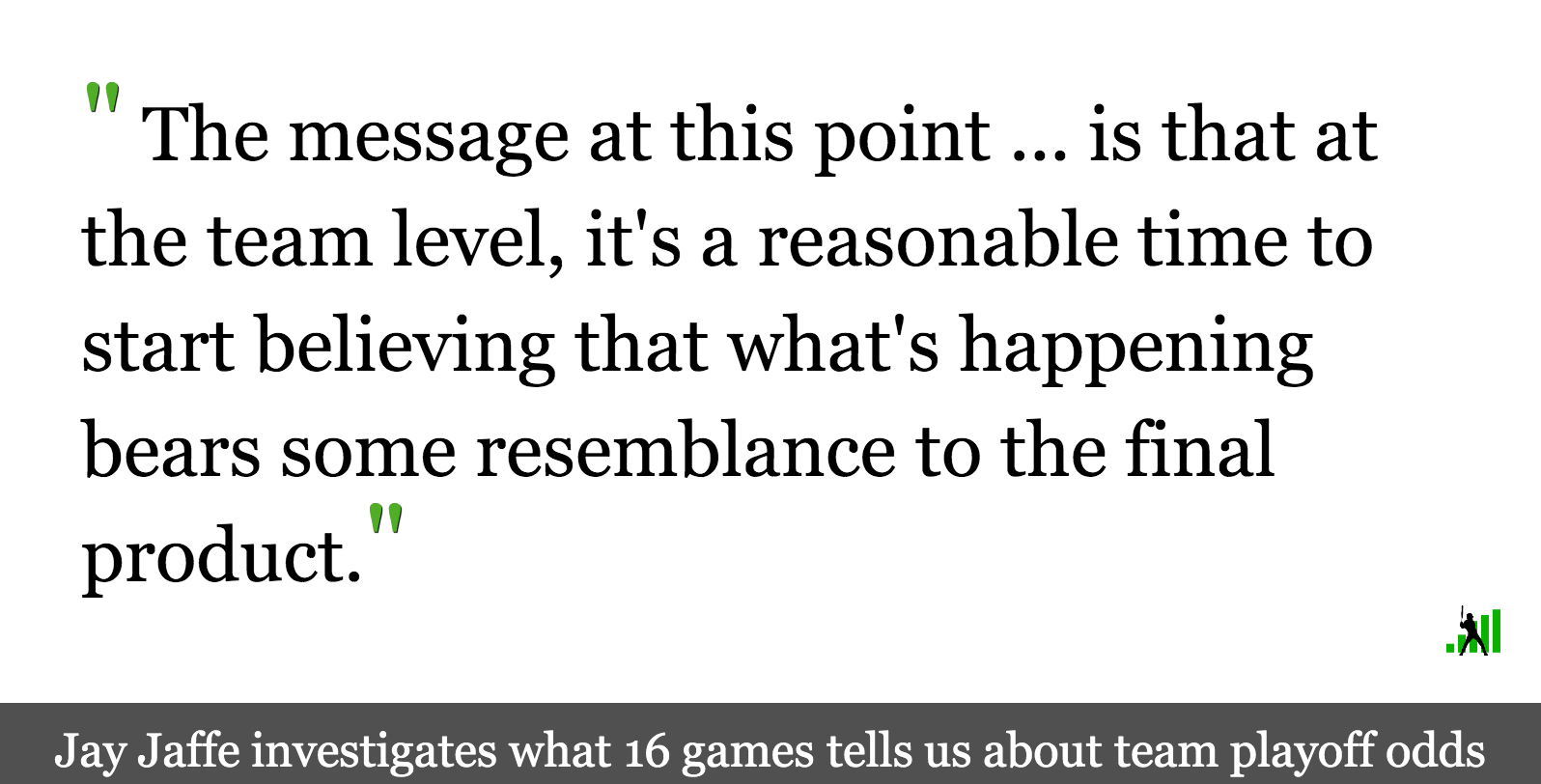 Early season performances are always tough to get a handle on, but on a team level, the 16-game mark is worthy of some note. In Baseball Prospectus’ 2012 book Extra Innings: More Baseball Between the Numbers (a book to which I contributed), Derek Carty — a name that should be familiar around here — found that at the 16-game mark, a team’s year-to-date record became as predictive as simply assuming they’ll finish at .500, as the largest possible sample of teams inevitably does. Through Monday, 19 teams have played at least 16 games, and 11 have played at least 17, which makes this a good time to take a closer look.

In his study, Carty examined non-strike seasons from 1962 through 2011, calculating the correlation between a team’s record after n games and its final record. After one game, for example, the correlation with teams’ final mark was just .12, while at the five-game mark it was .28, and at the 10-game mark, .42. The correlation reached .5 at the 16-game mark, rose to .52 at the 17-game mark, and so on. Carty made no mention of the likelihood of teams making the playoffs, though with changing postseason formats — including the introduction of a second Wild Card in each league starting in 2012, just when the book hit the streets — such information would be of limited utility.

To my knowledge, Carty hasn’t updated the study since publishing that, so we don’t know for sure that the 2012-18 period hasn’t altered his conclusion slightly. Since we’re not doing brain surgery here — just getting a preliminary read on where this season is heading for teams — it doesn’t matter a whole lot. I didn’t set out to re-create Carty’s study, but I did examine what 16-game performances from the two Wild Card era can tell us.

For starters, here’s a breakdown of how teams fared overall based on their win total through 16 games, and whether they made the playoffs.

With just seven seasons of data, we’re dealing with some small samples, which explains why we see anomalies such as the group of 4-12 teams finishing with higher winning percentages than 5-11 teams, or 11-5 teams faring worse than 10-6 or even 9-7 teams. Nonetheless, just short of 10% of the way through the season, the correlation between these teams’ winning percentages at this point and their final ones is .54, slightly higher than in Carty’s larger sample, suggesting that the .5 threshold was reached a game or two earlier.

In other words, we’re not jumping the gun with this investigation. We can glean a few key points that have applicability towards this year’s early results, mainly by bucketing the teams currently within certain win ranges.

Sorted by fewest wins through 16 games, and then by current playoff odds, lowest to highest.

First, we can pretty much write off the playoff chances of any team that’s 5-11 or worse by the 16-game mark. Nobody expected the Marlins, Blue Jays, or Royals to go anywhere, but the recent history of such teams makes for particularly bad news for the Rockies, who last year went 91-72 and secured their second Wild Card spot in as many years. Our playoff odds show the Rockies, who were projected to win a modest 81 games at the outset, with less than a three percent chance of making the playoffs based upon the combination of their performance thus far and their projections going forward.

Sorted by fewest wins through 16 games, and then by current playoff odds, lowest to highest.

From the 6-10 or 7-9 groups, over the past seven seasons only 15% of such teams (nine out of 60) made the playoffs. From among this year’s teams, that will come of no surprise to the Orioles, Giants, or Diamondbacks — or for that matter the Reds (5-10, with odds of 4.0%, 3.2%, and 7.2%), who at best will wind up in this bucket — as all of those teams are in some phase of rebuilding or retooling. The news may be harder to swallow for the Red Sox, Yankees, and Cubs, all of whom reached the postseason last year, with the Red Sox (who last year became the first team since the 2003 Giants to start 14-2) winning it all. As it stands, Boston’s playoff odds are appreciably lower than New York’s thanks to the their two additional losses, though with the two rivals squaring off in the Bronx for a pair of games on Tuesday and Wednesday, things could change quickly.

Sorted by most wins through 16 games, and then by current playoff odds, highest to lowest

Any team with 10 to 13 wins through their first 16 games should be taken seriously, as 59% of those teams (29 out of 49) made the playoffs in the past seven seasons. While nobody should be surprised to find the Astros at this level, particularly given their preseason playoff odds of 95.1%, few expected the Mariners (who were just swept by Houston) or the Padres to be here given that they left the gate with odds of 2.3% and 12.9%, respectively. Meanwhile, the starts of the Brewers (10-6), who won 96 games and the NL Central last year, and the Rays (12-4), who won 90 games, look much more solid than their initial odds of 28.2% and 27.9% would have led us to believe. The refurbished Mets, who entered the year with 39.6% odds, are off to a fairly convincing start as well.

Regarding the Mariners, the one team from this period (out of four) who started 13-3 and missed the playoffs was last year’s Angels squad, who followed that hot start by losing nine of their next 12 games and finishing just 80-82. Regarding the Padres, it’s worth remembering that just last year, the Blue Jays and Pirates jumped out to 11-5 starts but finished 73-89 and 87-79, respectively. Don’t print those playoff tickets just yet.

Maybe Something? — 10-6 or Better Still Possible

From among the 12 teams I haven’t mentioned yet, four whose schedules have lagged behind could join the above group, including the defending NL East-winning Braves and the much-improved Phillies. The other eight, including three of last year’s postseason teams — the Wild Card A’s, and the division-winning Indians and Dodgers, who went from juggernaut to nearly unwatchable in the time it took to write this — are feeling gravity’s pull towards the center, lumped among the 8-8 and 9-7 teams. Based upon the observed results in the first table, it’s arguable that I should include the 9-7 teams with the 10-to-13 win ones, but I think the point can stand even without that.

Of course, we have far more information about all 30 teams than just what their records after 16 games tell us, whether we’re talking about additional games played (and thus higher correlations with final record), Pythagorean or BaseRuns projected records, or our depth charts-driven playoff odds, which as you can see from the above, suggest that not all 6-10 or 10-6 (or whatever) records are created equal. Still, the message at this point, either way, is that at the team level, it’s a reasonable time to start believing that what’s happening bears some resemblance to the final product.