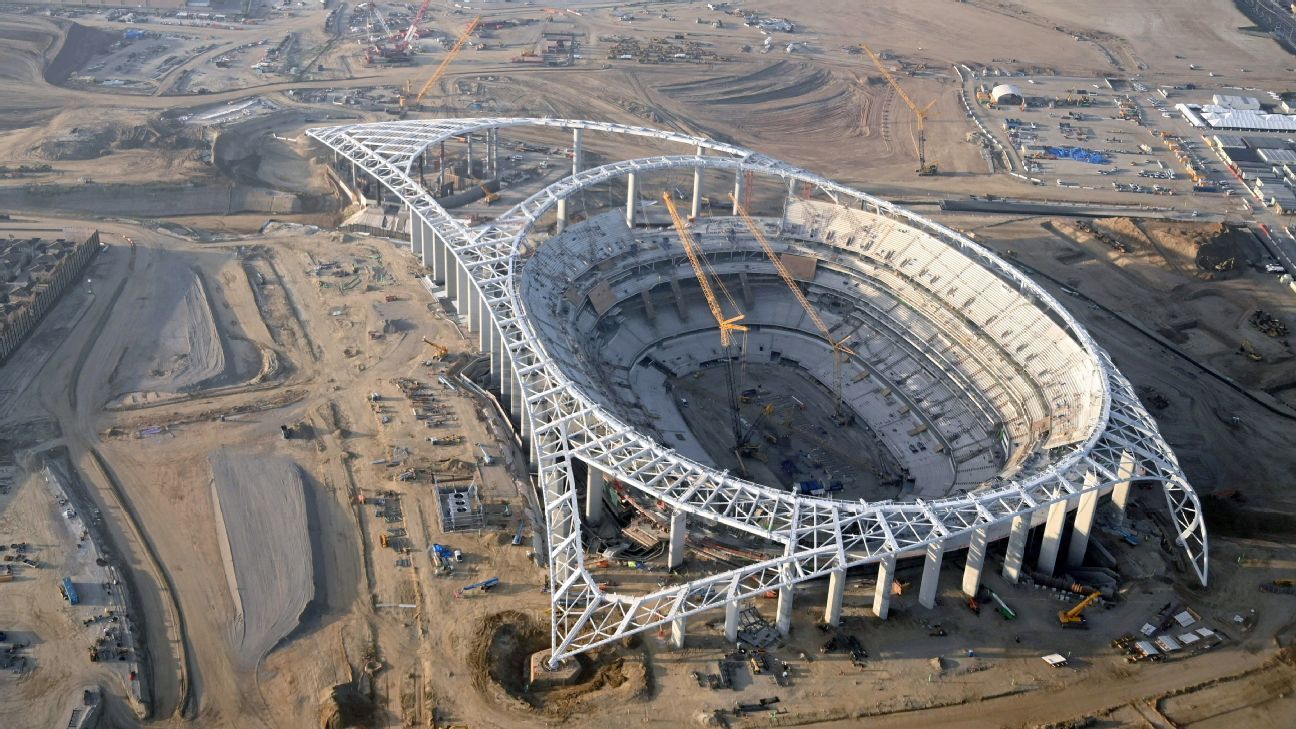 The outer shell of the canopy that will sit above the new Inglewood stadium for the Rams and Chargers is now complete. The stadium is on schedule to be ready in the summer of 2020.

LOS ANGELES — Looking north atop the bowl of his team’s new stadium, Los Angeles Rams chief of football operations Kevin Demoff smiled when asked about the prospects of his team playing a game here in a little over a year.

“This project is really going to become the epicenter of Los Angeles, certainly from an entertainment perspective,” Demoff said. “It’s one of the largest construction projects in the city. When the NFL envisioned coming back to Los Angeles, this is exactly what they had in mind.

“I think they take great pride in Stan Kroenke and his group stepping up and delivering it, and doing it 100 percent privately financed.”

Kroenke’s development group held a ceremony on Monday to commemorate the completion of the outer shell of the iconic canopy that will sit above the new Inglewood stadium, Champions Plaza and the performance venue.

the final piece of the canopy is in place ? pic.twitter.com/ZKi6DsiJT9

The new stadium will serve as the home for the Rams and Los Angeles Chargers. It also will host year-round sports and entertainment events, having already securing Super Bowl LVI in February 2022, the college football national championship game in 2023 and the opening and closing ceremonies of the 2028 Olympic Games.

Chargers president of business operations A.G. Spanos says he looks forward to the Bolts hosting home games in the new facility next season and growing the team’s fan base in Los Angeles.

“I’m incredibly excited for our fans to have what’s going to be the best stadium in the NFL,” Spanos said. “Because that’s going to lead to a really great experience. There’s so many things about this stadium that are incredibly unique — the design, the technology — and it’s all going to be first class.”

Demoff said making sure the facility is top-notch is important as the NFL looks to grow the league’s fan base globally.

“It’s not just about the first game,” Demoff said. “It’s about decades of building Rams and Chargers fans to come here, and for NFL fans around the world to enjoy.

“When you think about the proximity to LAX (Los Angeles International Airport), we want to help grow the game internationally. This is the No. 1 entry point from Asia in terms of air traffic, and No. 2 from Latin America. This is going to be part of the Los Angeles landscape. So I think from our vantage point, it’s about making sure for decades to come this is a great NFL experience — not just for Rams and Chargers fans, but for fans of all 32 teams.”