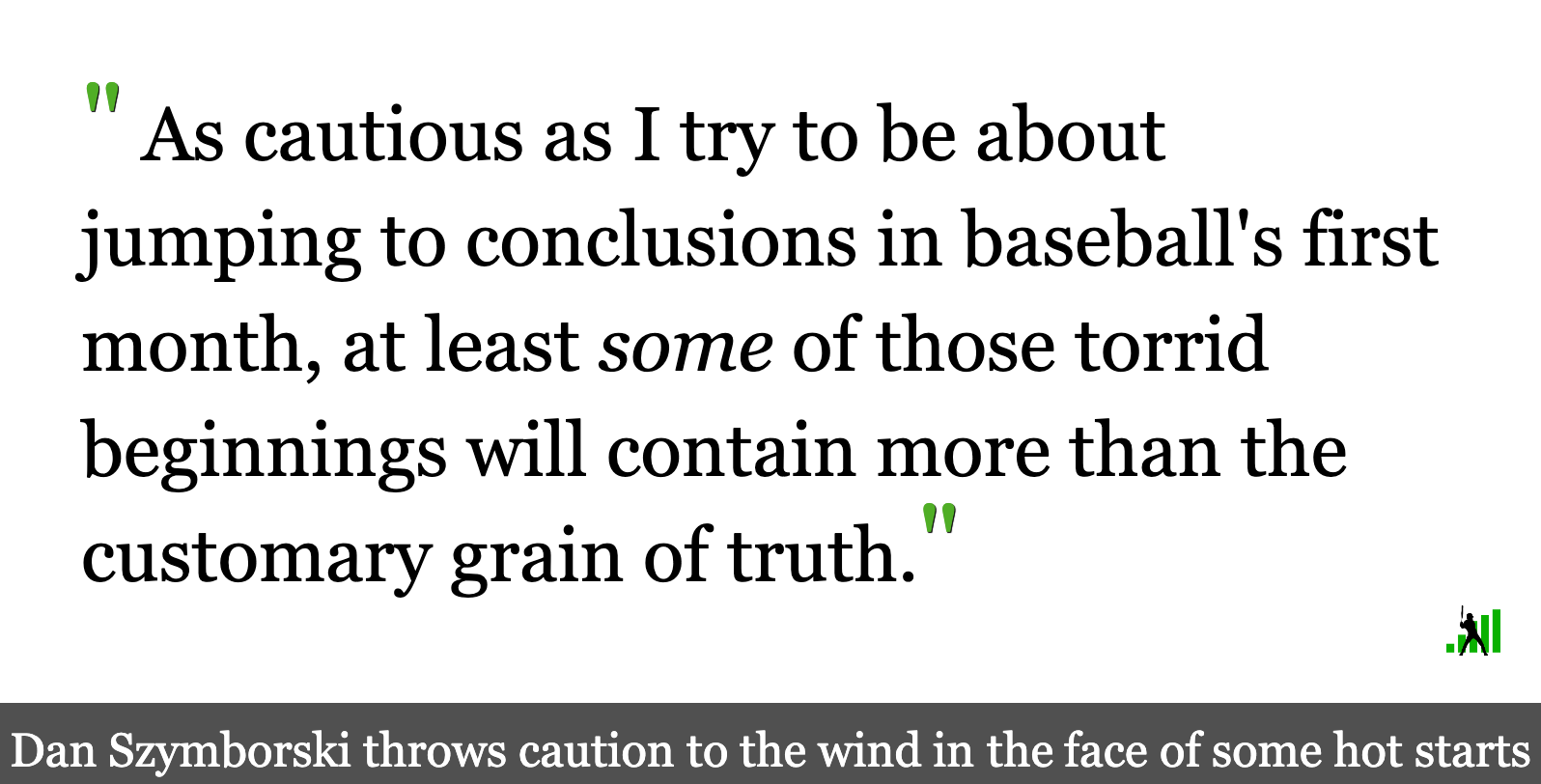 T.S. Eliot once mused that April is the cruelest month, but for me, it’s the most curmudgeonly one. While baseball returning is always a good thing, a good portion of my April job is to (partially) crush the hopes and dreams of fans excited about hot starts from their favorite players. While stats don’t literally lie, April numbers, thanks to our old friend and scapegoat small sample size, only tell a little bit of the story of 2019. But as cautious as I try to be about jumping to conclusions in baseball’s first month, at least some of those torrid beginnings will contain more than the customary grain of truth. So let’s go out on that proverbial limb and try to guess which scorching Aprils represent something real.

I’ve been burned before touching this hot stove, but there’s something so compelling about Moncada’s early-season performances as to once again disarm the skeptic in me. In 2018’s version of this piece, Moncada’s high exit velocity and his .267/.353/.524 April line had me believing that he had finally turned the corner, the one long-expected from a young, talented player with impressive physical tools.

As the narrator meme goes, he had not turned that corner. Moncada spent the next two months with an OPS that didn’t touch .600, and his final 2018 line represented no real improvement over his 2017.

Moncada is hitting the ball just as hard as he did last year, with his average exit velocity ranking sixth in baseball. But this time around, his performance is also coming with some significant progress in his contact statistics. Moncada’s profile has always been a bit weird in that he doesn’t seem to have a serious problem chasing bad pitches, certainly not as you would expect from a player who just led the league in strikeouts with the fourth-highest total in baseball history. But Moncada was in the top 20 in not swinging at pitches outside the zone.

In 2019, he’s been more aggressive, swinging at more bad and good pitches, but there hasn’t been a corresponding contact tradeoff, and he’s in fact making more contact overall, especially against good pitches. Given that one of the purposes of plate discipline is for hitters to actually hit the good pitch they eke out of the dude on the mound, I once again return to the ranks of the believers.

I’ve always been a believer in Rodon’s abilities, but when it comes to his health? Not so much. While Rodon has never required Tommy John surgery, he’s missed some time due to injury in every season. So far, we’re good on that front, and Rodon’s been impressive over four starts, striking out nearly 12 batters a game and holding onto a FIP under two.

Despite the yearly articles about him working on his changeup, Rodon’s never been great at changing speeds, but his slider is one of the best in baseball and like Patrick Corbin in 2018, Rodon’s been riding it hard and getting good results. With the most valuable slider of 2019 so far, and Rodon avoiding those strike zone mistakes better than he did last year, I’m cautiously optimistic about him keeping up borderline ace numbers.

Oh my god. Mike Trout had another gear this whole time.

It’s weird to see Trout on a list like this, but as frightening a player as he’s been over the course of his career, his plate discipline is actually getting better, bordering on Joey Votto level. He’s swinging at fewer pitches than he ever has since arriving in the majors but that drop is entirely from not swinging at bad pitches. There’s something manifestly unfair about a player with Trout’s power also apparently developing the contact skills of Luis Castillo or Juan Pierre. Trout currently stands with 16 walks against four strikeouts, which I’m not sure is even legal. I’m going to be suspicious of anyone with a .382/.593/.882 batting line, but Trout is making this plausible to the extent that it scares me a bit.

I’m disappointed that the Pittsburgh Pirates showed such little aggressiveness in the market this offseason, but I found the Chris Archer trade that sent Glasnow and Meadows to Tampa to at least be justifiable for them. After all, with most of their core prospects having graduated to the team, they arguably couldn’t wait around for Glasnow to ditch the walks or for Meadows to lose the injured list appearances.

The trade is looking quite a bit worse right now, not unlike the swap of Fernando Tatis Jr. for a struggling James Shields a few years ago. Meadows has been healthy and shown a real bump in his power, and Glasnow having an elite walk rate is something I didn’t see coming. Glasnow in particular showed signs of improvement after joining the Rays in 2018. One big difference is his faith in his curveball, a top 10 curve in baseball that Glasnow is throwing twice as often as in 2018, a change significant enough to indicate a real change in approach. Incidentally, the Rays have three of the top 10 curveball pitchers in 2019. Normally, I’d be worried that Glasnow’s changeup, a pitch he had been working on in 2016-2017, never evolved to become a real part of his repertoire, but he’s locating his curve well enough that he’s using it against lefties as if it were a changeup.

People keep asking me if Castillo has turned the corner this year for the Reds and finally become the ace he looked to be developing into after his 2017 call-up. In reality, he turned the corner in the second-half of last year; his hot start to 2019 is more consolidating his gains than establishing a new plateau of performance. In any case, Castillo has the best contact rate of any starting pitcher in baseball in 2019, and his already excellent changeup keeps improving, going from a 23% whiff rate in his rookie season to 27% in 2018, and up to 33% this year. Castillo has also improved his average launch angle allowed to hitters by two degrees, enough to rank him in the top 10 in baseball, which is important given the park he plays in.

OK, he’s not likely to keep hitting one out of every three fly balls out of the park, but Alonso’s pure power has been tantalizing the wider public since he notably crushed a Jorge Guzman fastball during the Futures Game last year.

That wasn’t a fluke, and Alonso currently has the hardest-hit baseball in the league so far this year. The power is real and while he’s going to be a lot closer to a .240 hitter than a .340 hitter, I think ZiPS is underselling his thump. Alonso has a real shot at leading the league in home runs in his rookie season and though his plate discipline is far from elite, it’s good enough that he’ll still keep seeing enough eminently crushable pitches.

Vogelbach’s certainly not going to finish the season — or the month — with a slugging percentage over .900, but it’s hard to fake exit velocity, and he’s behind only Aaron Judge in that this season. It’s a shame that it apparently took an injury to Kyle Seager, and the resulting temporary move of Ryon Healy to third, to get the Mariners to give Vogelbach a real extended opportunity, but there are no style points in baseball. There’s still room for improvement, as Vogelbach would have the lowest zone-swing rate in baseball if he qualified (he’s missing a few plate appearances), which raises related worries about him falling into the Ben Grieve/Jeremy Hermida trap, but as with Alonso, the power is real.