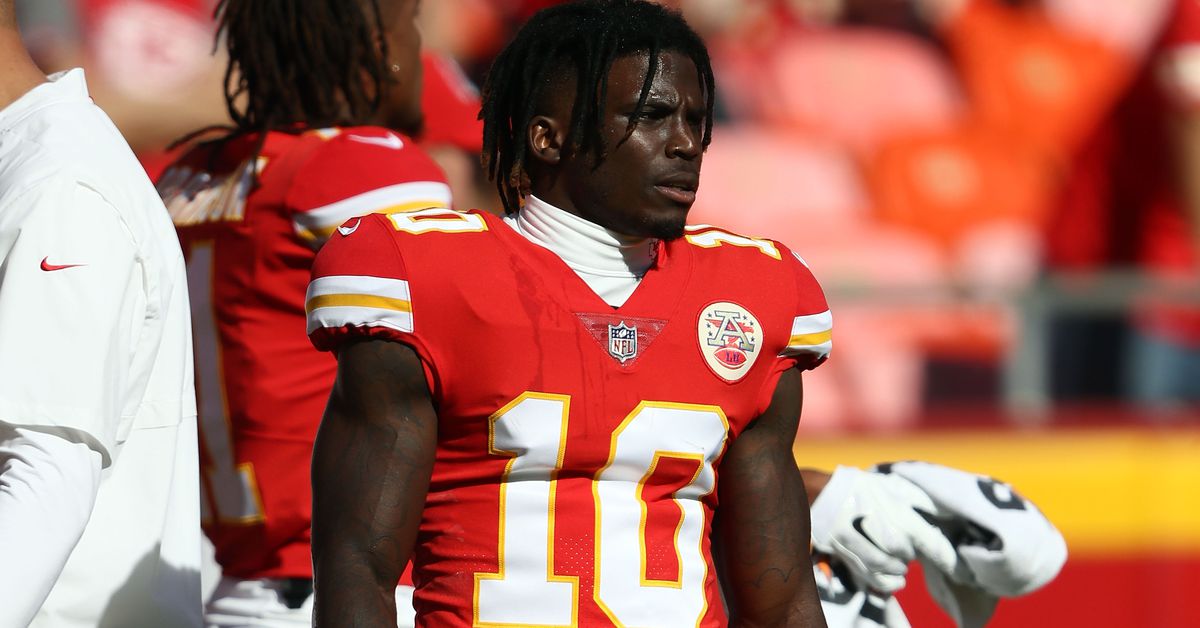 Kansas City Chiefs wide receiver Tyreek Hill is under investigation by police for an alleged battery and one other alleged incident.

According to KCTV 5, Overland Park (Kan.) police were called to the home of Hill on March 5 and March 14. The first call was to investigate a report of child abuse or neglect, and the second was to investigate battery of a juvenile. The Kansas City Star reported that the incident was against Hill’s son, resulting in a broken arm.

Hill has not been charged with a crime and the Chiefs confirmed they are aware of the investigation.

“The club is aware of the investigation involving Tyreek Hill,” the Chiefs told the Star in a statement. “We’re in the process of gathering information and have been in contact with the league and local authorities. We’ll have no further comment at this time.”

Chiefs head coach Andy Reid hasn’t been a significant part of that process, though.

Chiefs coach Andy Reid says he has not been in touch with Tyreek Hill. He does not have a further statement on the matter.

“We’re just letting it take its course. Did I expect it to happen? I don’t know what happened. That’s what they’re trying to figure out.”

Reid didn’t speak about Hill again until the Chiefs began offseason workouts in the middle of April. Hill was in attendance, and Reid was vague once again.

“I know you’re going to potentially ask about Tyreek,” Reid said to reporters, via Arrowhead Pride. “Tyreek is here. I don’t have anything further to tell you from the statement we put out. There’s been no new news on it and so I’m going to leave it at that. I have had a chance to say hello to him. I have done that, and again, see him in the meeting.”

According to the Star, Overland Park police confirmed that Hill is under investigation for two incidents and a report was forwarded to the local prosecutor’s office

Hill, 25, was arrested and charged with domestic assault and battery by strangulation in December 2014, following an incident in which he reportedly punched and choked his then-pregnant girlfriend. He pleaded guilty to the charge and was dismissed from the Oklahoma State football team before finishing his collegiate career at the University of West Alabama.

Hill completed his probation requirements and the case was expunged from his record. We’ll revise with more information if there are updates.