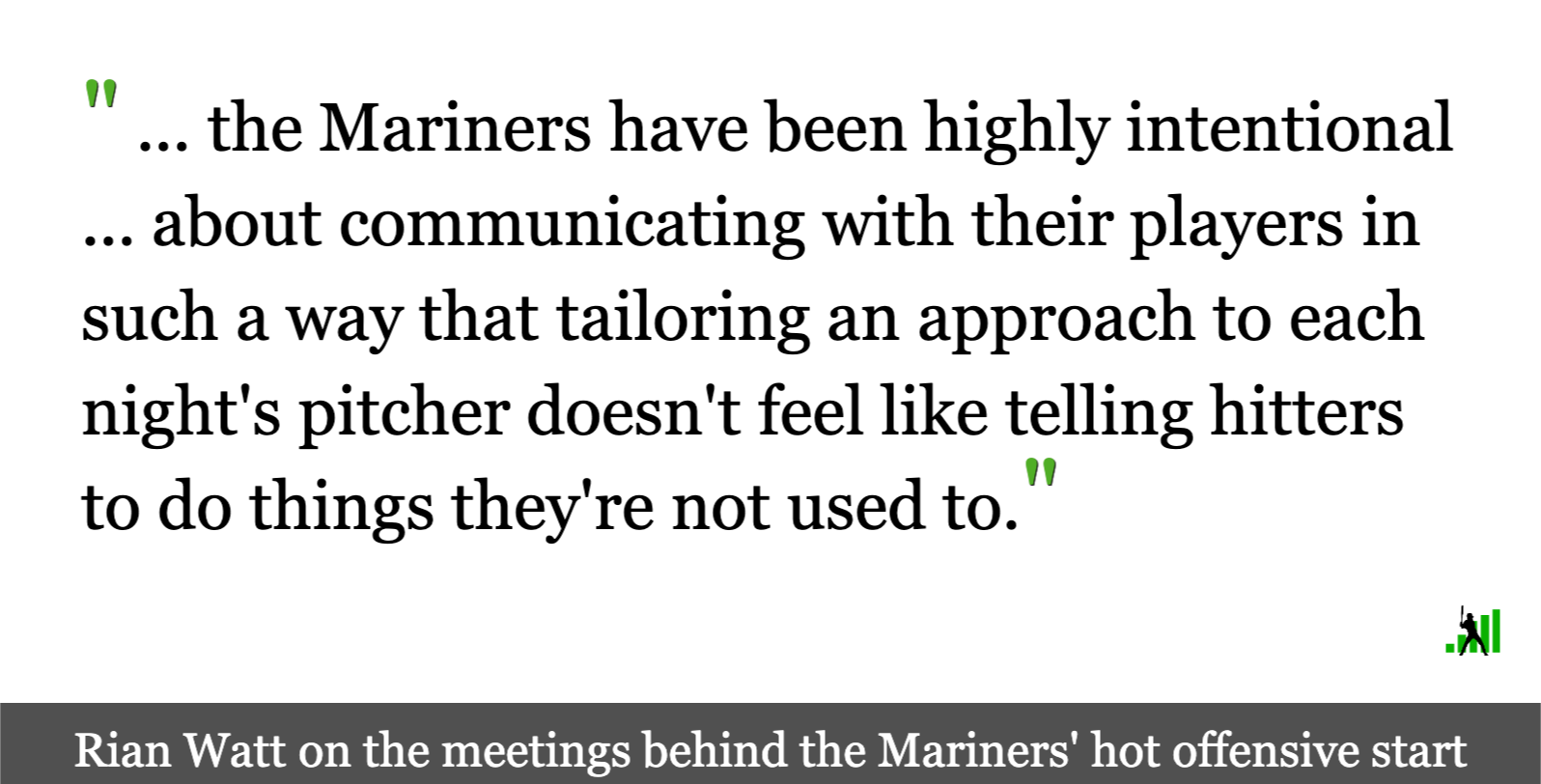 Through their first 701 plate appearances of the 2019 season, the Seattle Mariners hit 38 home runs and posted a wRC+ of 145. Both marks were the best in the game by a fair margin, though you probably knew or could have guessed that already, because Jay Jaffe wrote about the team’s strong offensive start on this site last week. What you might not know is that if you ask Seattle’s hitters about the source of their success, they’ll tell you — after getting through the usual platitudes of “just playing as a team” and “taking it one game at a time” — that this year’s daily hitters’ meetings, led by first-year hitting coach Tim Laker, have been good. Really good.

“Those hitter meetings,” says fellow first-year Mariner Tom Murphy, “have been fantastic. It’s been one of the things that’s stood out to me this year. From the analytic staff to the hitting staff to the players speaking out about what they’re seeing, it’s been a triple-headed effort. Not only are we getting the statistics on what guys are throwing, their locations and pitch tunnels and stuff, we’re also getting real-world advice from players and hitting coaches together. That communication has been spot-on, and I really think it’s contributed to our success.”

Laker, 49, came up as a coach in the Diamondbacks’ system after spending parts of 11 seasons as a big-league catcher, mostly for Montreal. In Arizona, under the guidance of  instructors Craig Wallenbrock and Robert Van Scoyoc, he developed an approach to hitting and communication that focuses on finding the intersection between a hitter’s natural strengths and a pitcher’s natural weaknesses, then communicating an approach based on the center of that Venn diagram that’s simple enough for hitters to take to the plate without needing a cue-card.

“Pitchers have ranges, philosophy-wise, in which they throw their pitches,” Murphy says. “And our hitting team has put that into a simple system, which says, for example, that if a guy has low-ride [meaning a pitcher’s pitches do not deviate substantially up or down from their apparent path upon release] then he’s a ‘zero-ride’ and if he’s high, you’ll go up to three. Nice and easy. And then from there you can visualize the center of the strike zone, and know that a fastball right down the middle that’s a three-ride would play up at the top of the zone even if visually it starts out right in the middle. And if a guy has a lot of sink, anything that starts down in the zone is not going to be a strike, regardless of whether my eyes are telling me it’s a strike out of his hand. You have to find ways to prepare in advance for the tricks your eyes are going to play on you.”

Put that way, the system sounds almost too simple — bucketing continuous data into three or four tranches is not, after all, rocket science. But in the psychological world of hitting, simplicity is a virtue in its own right, and finding ways to communicate complicated data simply and actionably is where teams are currently looking to find any edge they can. In the Mariners’ case, the particular challenge they’re working to tackle this year is finding ways to get their players attacking each night’s particular starting pitcher while not getting too far out of their own comfort zone. That’s a tall order for hitters who have often been raised spend their days thinking of ways to keep their approaches consistent, not tailor them to each night’s starter. But Laker things he’s found an approach that works: translating the message into a specific external cue or physical action.

“For example,” says Murphy, “if we’re facing a big sinker-ball guy, then maybe a good external cue for most guys is to try to hit a popup or a ball way up in the air, so we get underneath that ball path and our swing plane plays better to that guy. Whereas against a guy with a lot of rise on his fastball, like a Verlander, we’re going to try to hit a lot of line drives or almost ground balls to manipulate ourselves without thinking too mechanically to get the desired bat path to that ball. That’s what we do well as players, is move physically, and Laker has been great about taking the statistics and giving us a plan to take into the game that’s more externally focused; that’s still us, but tailored to the pitcher.”

“I think what we’re looking for is guys that have swings that can cover more than one spot,” Laker told me. “I think our guys are good enough that if we adjust the slices they’re swinging in just a little bit on a monthly basis, that they’re good enough to hit in different zones and not just get pigeonholed into one specific spot where they are kind of at the mercy of the pitcher, just hoping that he’s going to make a mistake in the one spot that they’re looking at.”

Perhaps to Laker’s surprise, that approach has found resonance even with Seattle’s veterans, like Jay Bruce. “I think you have to try and walk the line a little bit,” he told me. “Because at the end of the day, they have to throw the ball over the plate. They’re going to miss, and they’re going to make mistakes. And on the one hand if you go chasing what they do you get yourself in trouble, but also I think being cognizant of their approach and their plan and what makes them have success against you is important, too. Finding that balance has been good this year.”

For a relatively young team, hearing that message from all angles — coaches, analytics staff, and veterans — is critical. “That’s when those meetings become really powerful,” says Laker, “When our younger guys can listen to Jay or Edwin, guys who’ve faced other starters a number of times, and hear them say, ‘Here’s what he’s done to me, here’s what his pitch looks like to me, here’s how it moves, here’s what he’s trying to do.’ I think that carries a lot of weight. I think the more we can get hitters involved in what we’re trying to do, and have a collaboration in an open forum, that’s good.”

The Mariners probably aren’t going to have the best offense in baseball all year long. They might not even have the best offense in baseball all April long. But if you’re chalking up their early-season numbers to mere good luck, or running into a stretch of pitching that’s performing below its level, I’m not sure you’re correct. Pitching has under-performed against Seattle for much of this young season (the just-concluded Astros series perhaps excepted) because the Mariners have been highly intentional about finding ways to make it so, and about communicating with their players in such a way that tailoring an approach to each night’s pitcher doesn’t feel like telling hitters to do things they’re not used to. So far in 2019, it may just be working.