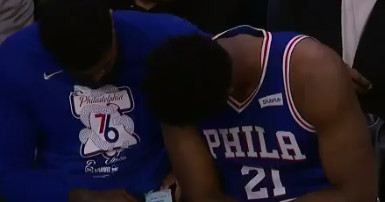 Amir Johnson brought a cell phone to the bench and showed Joel Embiid text messages during Philadelphia’s playoff game against Brooklyn on Saturday. It was one of the most bizarre sequences we’ve seen in a basketball game, and ESPN’s camera crew caught it, with Doris Burke absolutely blasting Johnson for his actions.

For more context, this was midway through the fourth quarter when the Sixers trailed 14 points. They went on to lose to Brooklyn — a No. 6 seed in the East — 111-102 in Game 1, despite boasting four players who either made or should have made the All-Star Game. Johnson did not play a second of this game. Embiid battled through injury, but attempted to dominate every minute he was on the floor.

Johnson was later pulled from the bench and sent to the locker room. Using a cellphone while on the bench is a violation of the NBA’s Operations Manual. Johnson will likely either be fined or suspended a game.

Sixers coach Brett Brown on Joel Embiid & Amir Johnson looking at cell phone on bench during Game 1 loss to Nets: “It’s completely unacceptable and we will deal with it internally, very soon. It’s not something we are and certainly don’t condone.” pic.twitter.com/oau1n7qj5G

Embiid gave context to the incident after the game.

“Amir was checking on his daughter. She’s sick.”

Joel Embiid on why Amir Johnson was seen looking at his cellphone on the bench during Game 1 in Philly. pic.twitter.com/1uJB34RKAq

Through the 76ers, Johnson released a statement after the game:

Amir Johnson released a statement apologizing for having his phone on the bench during Game 1: “I take full responsibility & will accept the consequences of my actions. I also apologize to my teammates, the 76ers organization & the fans for the distraction this has caused.”

Johnson distracting Embiid with text messages is exactly why cellphones are prohibited. As a veteran on the team, that move was unacceptable.

Cmon Amir Johnson, a CELLPHONE on the bench?? You’re supposed to be an “ole head” on this Sixers team.. No EXCUSE…

That didn’t stop fans from getting their jokes off at Johnson and Embiid’s expense.

Amir Johnson checking his Instagram comments on the bench and Doris is not having it.

We may have seen the last of Amir Johnson in Philly.