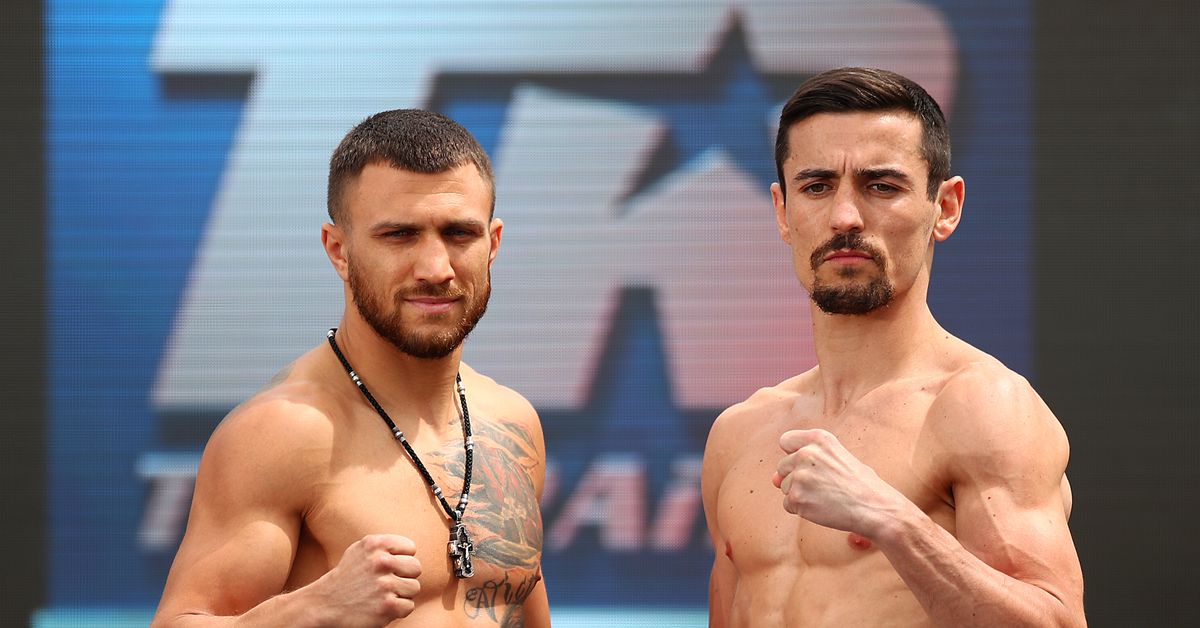 Vasiliy Lomachenko retained his WBO and WBA lightweight titles on Saturday, knocking out Anthony Crolla in the fourth round to move to 13-1 for his professional career.

It wasn’t a close bout, not at all. Crolla lasted into the fourth round, but had very little offense at all outside of the first round. He was consistently backed up and out-boxed by Lomachenko, and had very little room to throw his own punches.

Lomachenko got Crolla up against the ropes late in the third round and hit him with a flurry that lasted about 15-20 seconds on its own, and resulted in a technical knockdown. Lomachenko briefly thought he had won the fight, but Crolla survived to the fourth round.

There, he ran into a one-hitter from Lomachenko, a right hook to the side of the head just outside of Crolla’s guard. Crolla faceplanted off the hit and it was a clean knockout for Lomachenko.

After the bout, Lomachenko made it clear that he plans to stay at 135 pounds to continue unifying titles.

In the featured bout of the undercard, Arnold Barboza Jr. downed Mike Alvardo in a dominant bout. He scored a knockout, as expected, and was definitely the highlight of the preliminary card.

The co-main event/other main card bout featured Gilberto Ramirez up against Tommy Karpency, at 175 pounds. Ramirez had a 168-pound belt but moved up to test the waters at the new weight class. And he looked great.

Karpency had nothing for Ramirez for four rounds. When he was on the offensive, he ate vicious counters. When he was backing up, Ramirez threw together some beautiful, powerful combinations.

Ramirez didn’t take a single big shot on his own chin, and Karpency, who was looking at his corner often in the third and fourth rounds, threw in the towel after the fourth round.

Below, you can find the play-by-play from the main card and full results. Don’t forget about the also exciting bout between Claressa Shields and Christina Hammer tomorrow (Saturday).

Round 1: A long feeling-out period for bot h boxers to start. Crolla throws the first shot, a body blow that Lomachenko walks through. Left straight from Lomachenko sneaks through Crolla’s guard.. Crolla doesn’t throw much of anything in the first round, while Lomachenko mostly dictated where the fight went and landed a few jabs. Not much action, but Lomachenko was clearly in the driver’s seat.

Round 2: Lomachenko is coming forward a bit more here, and he lands a couple nice jabs to start the round.. He dodges two hard straight left hands from Crolla. Right hand to the body from Lomachenko. Two short jabs followed by a big right hook from Lomachenko. Crolla is definitely playing defense, but Lomachenko is going to get through it eventually. Big uppercut from Lomachenko staggers and backs up Crolla. He gets him against the ropes, and Crolla eats a hard body shot. Lomachenko’s round, easily.

Round 3: About a minute into the third round, Lomachenko catches Crolla ducking, and he blasts him with a big uppercut, followed by a one-two over the top. He gets Crolla backing up hard, and connects with a big shot to the chest. Left straight right on the nose from Lomachenko. He slows it back down when Crolla comes forward with hooks of his own, but in the final 30 seconds, Lomachencko gets Crolla up against the ropes and throws punch after punch. He’s teeing off on Crolla, and the referee separates them. Lomachencko thinks it’s a knockout, but it’s a technical knockdown and not a TKO. The round ends.

Round 4: They tap gloves to start, and Lomachenko quickly lands a hard left uppercut, then two winging hooks to the side of the head. Crolla fires off a straight, but he’s mostly turtling. Lomachenko puts together another flurry, peppering Crolla with short shots to the body. Then the big one lands and he knocks Crolla to the mat! This one is over!

Round 1: Ramirez buries a hard body shot counter and peppers Karpency’s guard. Karpency tries a couple short jabs, but Ramirez is throwing with power early and often. They tie up after a short right hook from Ramirez. They swap body shots. Short uppercut from Karpency lands, but he eats a couple jabs in response. Karpency already has some swelling around his eyes. Ramirez landed the better shots of the round.

Round 2: Ramirez is also guarding very well — Karpency comes out throwing hard, but Ramirez gets out of the way and lands some hard shots of his own. Karpency backs him against the ropes with a quick flurry, but Ramirez isn’t bothered by it. He’s punching right through Karpency’s guard. Big counter right hook from Ramirez does some damage. Karpency is winging some high hooks, but nothing significant is landing. Left cross from Ramirez lands flush, and then a couple more body shots. Another Ramirez round.

Round 3: Ramirez is dialing it in now. He’s walking down Karpency and winning every single exchange. Heavy hooks continue to pepper the chin of Karpency. Huge left to the body from Ramirez. Karpency is doing a lot of backing up in this round, and he’s taking some deep breaths with a minute to go in the round. Karpency has virtually no offense for the remainder of the round.

Round 4: Karpency is just backpedaling — he has nothing for Ramirez, and keeps looking back to his corner. Ramirez is just keeping him in front and peppering him with all manner of punches. He misses most of his uppercuts, but they lead to strong body blows. Karpency turtles against the ropes and eats two big body shots, then a one-two-three over the top that catches him right on the cheeks. Karpency wings a wild left hook but it misses. Another easy Ramirez round. And his corner knows he has nothing for Ramirez — they throw in the towel between rounds.

11 p.m.: We’re checking in for the live blog, which will get underway just as soon as the main card bouts get started. The current round and bout will live at the top of this article, and below you can find past bouts, results, and the viewing information that originally shipped with this article.

Vasiliy Lomachenko is set to face Anthony Crolla in the main event of an ESPN+ exclusive main card on Friday evening. The card is backed up by prelims that will be streamed free on WatchESPN beginning at 8 p.m. ET, while the main card is set to start at 11 p.m.

Lomachenko was originally set to face Richard Commey after he took the vacant IBF lightweight strap, but Commey suffered a hand injury in that bout. Instead, Crolla is the WBA mandatory challenger. Lomachenko will put up hos WBO and WBA lightweight titles in the matchup.

In 13 bouts, Lomachenko has just one career loss, and it came in his second professional fight. He’s won 11 straight, including a unanimous decision over José Pedraza to unify the WBA and WBO belts. He’s won nine of his bouts by knockout and three by decision.

Most believe Lomachenko will run through Crolla, and preferred the Commey bout. But Crolla has fought some of the best and he’ll be at his best against Lomachenko. It could be a much more competitive fight than many expect.

The main card also includes a matchup between Gilberto Ramirez and Tommy Karpency at 175 pounds. Ramirez has his 168-pound belt, but is moving up a weight class. Ramirez is 39-0 and will not be putting his WBO super middleweight belt on the line. Karpency is a competent gatekeeper who has challenged for world titles multiple times.

Below is all you need to know to watch, including viewing information and the full fight card for Friday’s bouts.

How to watch Lomachenko vs. Crolla