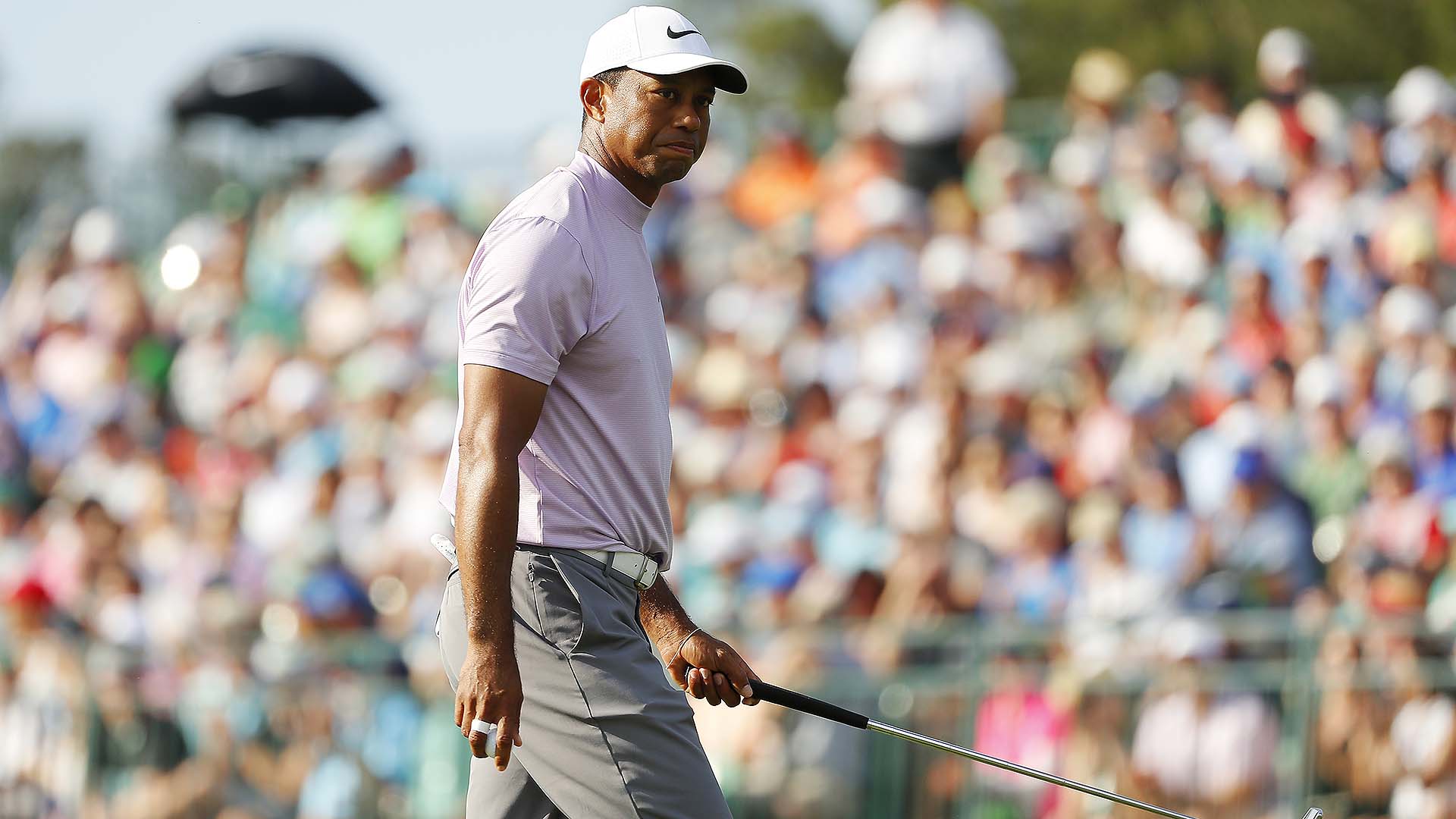 AUGUSTA, Ga. – The large leaderboard behind the seventh green had already been wiped clean, save for a CHECK MESSAGE alert for a poor guy who was strolling the grounds without his cell phone.

Not that the masses trudging up the adjacent 17th hole needed any help deciphering who had just grabbed a share of the lead Saturday at the Masters.

The four-time champion sent shock waves through Augusta National with another brilliant performance, his third-round 67 putting him in his best 54-hole position at the Masters in nearly a decade.

The only player standing between Woods and the most meaningful victory of his career is a familiar nemesis: Francesco Molinari. When the Italian added a pair of back-nine birdies to create some separation, a patron glanced at the updated board off 17 green and sighed.

“Interesting, the threesomes tomorrow,” Woods said. “Usually the reward for playing hard and doing all the things correctly is you get a nice little sleep in come Sunday, but that’s not going to be the case. We’ve got to get up early and get after it.”

Less than two years after thinking his career was over, Woods has now been within four shots of the lead heading into the final round for three consecutive majors. But this is by far his best chance. At The Open, he briefly took the outright lead but made three bogeys on the back nine. At the PGA, he stormed from four shots back to shoot 64 and scare Brooks Koepka, but he ultimately came up short.

“The last two majors count for something,” Woods said. “I’ve been in the mix with a chance to win, and so that helps.”

Those experiences helped him two months later, at the Tour Championship, where he snapped a five-year winless drought. “To lead wire to wire, going against the hottest players all season,” he said, “that gave me a lot of confidence. And now I’ve built my season into where I am now.”

And where he is now, at the Masters, is the overwhelming crowd favorite. The living legend with the 14 majors. The veteran with hundreds of rounds of experience at Augusta National, which could play tricky Sunday, with expected wind gusts of 25 mph.

If Woods can’t win this Masters, with this form, with those built-in advantages, then when?

“He obviously loves this place,” Molinari said, “and he’s playing great golf. I’m aware that it’s not going to be easy.”

It couldn’t have gotten much easier than Saturday afternoon, when the field average of 70.81 was the second-lowest in Masters history.

After bogeying the fifth hole for the third consecutive day, Woods appeared on the verge of getting lapped, but instead made three consecutive birdies before the turn. He tacked on birdies on 13, 15 and 16 to play his way into the final group.

“I did everything,” he said. “I drove it well. I hit my irons well. I made some putts. I just let the round build.”

Woods didn’t say that he’ll approach this final round with an added sense of urgency, but his body language and tone suggest that he’s transitioned out of his happy-to-be-here stage that dominated 2018.

Woods has proved he can contend in majors.

He has proved he can win again.

And now it’s time to make the final leap.

After the round, Woods wasn’t in the mood nor was he granted much time to offer his thoughts on this momentous opportunity – he answered only eight questions from the assembled press – and perhaps there’s a reason for that.

“I’m trying to get to bed as soon as possible,” he said.

Perhaps no player in the field will be more inconvenienced by the early start time than Woods. He’ll need to wake up at 3:45 a.m. to get his body ready for his 9:20 a.m. tee time. Never has he detailed the extent of his pre-round routine, but if fellow back-pain sufferer Jason Day needs at least an hour of treatment and a bizarre exercise in which he repeatedly blows into a balloon to keep his ribcage in place, well, it’s not a stretch to suggest that Woods and his fused back require even more time in an ice bath and on the physio table.

It was 6:37 p.m. when Woods emerged from the champions’ locker room, walked across the parking lot and plopped into the driver’s seat of a black Mercedes SUV. For the next 15 hours there was much work to be done, to get both his body and mind right for a Masters Sunday that could once again change everything.