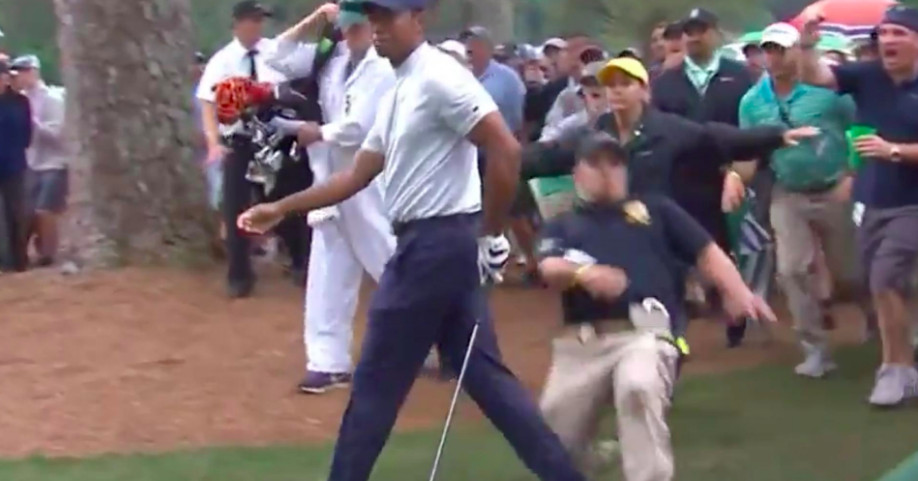 Tiger Woods is charging up the leaderboard late on Friday at Augusta National, playing through some rain that has forced players to adjust a bit on the fly. In addition to the change in conditions, Tiger is also having to deal with slide-tackling security guards. It’s all coming at him.

After playing from the muck right of the 14th fairway, Tiger began to walk back out of the trees and towards the fairway to make his way up to the green. As often happens at these golf tournaments, the crowd starts to move in around Tiger after contact on the shot. And as often happens in response, security guards and gallery marshals began to try and hold the line.

Only one overzealous security guard started hustling his way into the area to keep the “patrons” back and bit it right into Tiger’s ankle. Woods immediately grimaced in pain and started limping dramatically trying to gather himself. Everyone watching held their collective breath.

One of the very firm and Masters-specific rules is that there is absolutely no running at Augusta National. If you’re seen moving even just a tick above a speed walk, the Pinkerton security guards immediately stop you. It’s oddly obeyed 100 percent of the time. You never see running. But it’s unclear whether that kind of rule applies to the ones enforcing it.

While Augusta may appear pristine on camera between the fairways, it’s sloppy outside the ropes with all the rain and traffic this week. There’s not much they can do, even with spreading this kitty litter type stuff all over the high traffic areas. So it’s not surprising a running security guard might bite it. But that he had to do on a slide tackle right into Tiger’s ankle does qualify as a near national disaster.

Fortunately for the guard, and everyone rooting on Tiger, the four-time Masters winner drilled the subsequent birdie putt on the 14th after that absurd recovery short, the quality of which was lost in the mayhem of Tiger’s ankle nearly being sheared off. Then Tiger backed up that birdie on 14 with yet another massive putt on the 15th, bringing him to just a shot off the lead.

So we went from a complete scare of Tiger maaaaybe having to WD with one of the freakiest injuries in Masters history, to back-to-back birdies and a continued charge at the weekend lead. You may resume freaking out for the right reasons now.