Minnesota-Duluth was the second overall seed in the tournament, and beat Bowling Green and Quinnipiac in the first two rounds to advance to its third consecutive Frozen Four.

A pair of regional No. 1 seeds were knocked out in the first round, including top overall seed St. Cloud State, who fell 2-1 to American International. Minnesota State, the third overall seed, was dropped by Providence, the No. 4 seed in its section of the bracket who advanced to the Frozen Four for the first time since 2015.

The 2019 NCAA men’s hockey tournament has a heavy NCHC feel at the top, with the top two seeds coming from the same conference.

Minnesota-Duluth is the defending champions and ranked second overall, after defeating St. Cloud State 3-2 in two overtimes on March 23. to capture the National Collegiate Hockey Conference tournament title. St. Cloud State is the No. 1 overall seed in the tournament, having lost just five games all season, having a 13-game unbeaten streak snapped with the loss to Minnesota-Duluth.

St. Cloud State is trying for its first Frozen Four appearance since 2013. Minnesota-Duluth is in the NCAA tournament for a fifth consecutive season, and has made the Frozen Four in the last two seasons.

Thirteen of the 15 games of the tournament will be televised by the ESPN family of networks, with every game available to stream online on Watch ESPN.

The NCAA men’s hockey tournament is single elimination, with 16 teams split into four regions. St. Cloud State is the top overall seed in the tournament, and leads the West Region, in Fargo, North Dakota. The Midwest Region will be played in Allentown, Penn., with Minnesota-Duluth the top seed. Minnesota State is the top seed in the East Region, played in Providence. The Northeast Region will take place in Manchester, New Hampshire, with Massachusetts the top seed in that region.

The regionals will decide winners from March 29-31, with the top in each region moving on to the Frozen Four, which will be played April 11-13 at KeyBank Center in Buffalo. 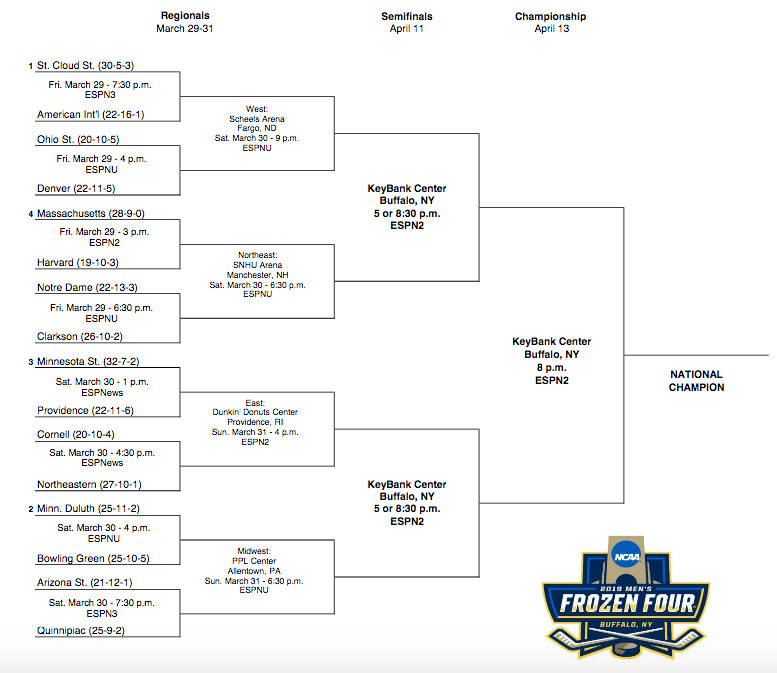