AUGUSTA, Ga. – Moments after the penultimate group finished, hundreds of patrons came pouring over the rain-soaked hill that guards the back of the 18th green and headed for the exits.

Some had merchandise bags in tow, others carried stacks of cups that reached the sky. But each and every one walked off the grounds at Augusta National Golf Club with a story that they can tell friends and family for a generation: they were there the day the Masters became a full-contact affair.

Tiger Woods has seen every inch of this place, having explored its various nooks and crannies in both good times and bad. But even he had never experienced anything quite like what came to pass Friday afternoon on the second nine, as the piercing siren of a weather delay led to him walking across the Hogan Bridge in serene solitude a few minutes before a well-meaning security guard nearly ended his pursuit of a fifth green jacket with a slide tackle that would make Neymar proud. Tiger Woods narrowly avoided injury Friday at the Masters after a GBI special agent slipped in the mud and nearly wiped out Woods in the process.

It was a strange scene to end a chaotic day at the season’s first major, where a jam-packed leaderboard now features a certain 43-year-old back on the prowl.

As cheers shook the course around him and the classic white leaderboards resembled a revolving door, Woods remained as relaxed and calm as ever. Even after a three-putt bogey on No. 8, even after a rain-delayed birdie try on No. 12 missed the mark. Even after his ankle turned awkwardly when an officer slipped and collided with his foot in a frenzy just off the 14th fairway, a moment when the entire sport held its collective breath.

But Woods walked off the collision and buried an unexpected birdie putt a few moments later to quell any lingering fears. Then he bagged another one on the next hole, unleashing an uppercut fist pump that truly resembled the Woods of old. The roar was unmistakable in both volume and meaning: we’re heading into the weekend at the Masters, and Tiger’s firmly in the mix.

“The only two bad putts I hit today were all on the same hole, over on 8,” Woods said. “Other than that, my speed was great and I hit a lot of putts that looked like they were going in. But they were on my lines, so that’s fun.”

Make no mistake, Woods is simply a notable cog in a diverse wheel that’s about to roll down the first fairway once third-round play gets underway. Just take a peek at the quintet of co-leaders, a record-breaking number through 36 holes, all of whom boast at least one major title.

Woods sits one shot adrift after rounds of 70-68, using his ever-present gum as a metronome to guide his steady climb up the standings. Birdie or bogey, missed fairway or made putt. Chomp. Chomp. Chomp.

While it’s not quite Arnold Palmer hanging out in the Founders’ Circle leaning against a convertible in his green jacket, it’s a modern-day embodiment of cool, calm confidence. Woods has been in this position before, having contended last summer at both Carnoustie and Bellerive. He’s won since.

And even though it’s been 14 years since he last won here, he’s starting to channel a recognizable swagger with each stride across these familiar grounds.

“I feel like I played my way back into the tournament. I was just very patient today,” Woods said. “Felt very good to be out there doing what I was doing. This is now three straight majors that I’ve been in the mix, and so it’s good stuff.” 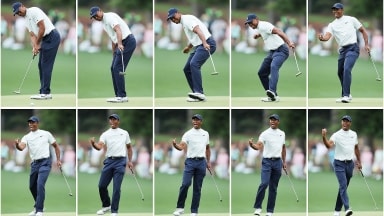 Tiger Woods shot a second-round 68 Friday at the Masters and is one shot off the 36-hole lead held by five different players. Here’s a few nuggets from a manic day at Augusta National.

Good stuff, indeed. Woods was the only player in the 87-man field to birdie White Dogwood, the treacherous 11th hole that played as the second-most difficult hole of the day. He found 16 of 18 greens in regulation, five more than the previous day, creating enough birdie chances with his stellar approach play that a trio of short misses on the second nine amounted to flesh wounds. Heck, even the actual wound that nearly felled him on 14 ultimately got brushed aside without a second thought.

“It’s all good. Accidents happen. I’ve had galleries run over me,” he said. “It’s just, you know, when you play in front of a lot of people, things happen.”

Heading into a wide-open weekend where the top nine players are separated by a single shot, it’s clear that the margin for error that existed over the first two rounds will evaporate as though sucked out by the SubAir machines lurking just below the surface. From this point forward, each missed opportunity and errant drive will weigh more heavily.

But here we sit in 2019, with Woods wearing shirts from 2005 and playing like it’s 1997. The self-assured grin that he has flashed so often around these parts is once again present in between pieces of gum.

And if this keeps up a fifth green jacket may be just 36 holes away, provided security watches their step.