AUGUSTA, Ga. – Even after “one of those days”, Rory McIlroy remained upbeat in his quest to win the Masters and complete the career Grand Slam.

McIlroy explained following his second-round 71 that left him tied for 36th and seven strokes off the lead that nothing really went his way on Day 2, not his drive at the first that bounced off a cameraman and into a poor lie, not his drive at the second that ended up in a divot, nothing.

Despite those bad bounces, however, the Northern Irishman was optimistic he could turn things around on the weekend and move back into the hunt.

“Standing here I’m much happier tonight than I was last night coming off the course,” he said. “I just bogeyed the last two holes [on Thursday], in comparison 1 under for the last four to get myself in for the weekend, thinking in the middle of the 15th fairway I have a realistic chance of [missing the cut]. So to get in and be seven back, I’m pretty happy.”

McIlroy will likely need some help from those ahead of him on the leaderboard, which includes Tiger Woods, Dustin Johnson, Brooks Koepka and Jason Day, as well as a big weekend but after his poor start on Thursday, which included six bogeys, he was pleased he at least gave himself a chance. 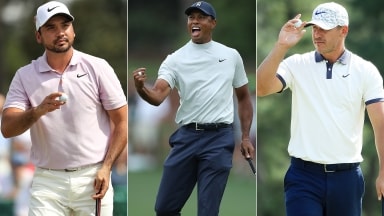 On a loaded leaderboard at the 83rd Masters, one name stands out in the star-studded crowd. Tiger Woods will enter the weekend just one off the lead at the year’s first major.

“I don’t feel like I’m that far away,” McIlroy said. “To shoot under par today considering some of the breaks I got and some of the shots I hit, and I’m right there.”