The 2019 NHL playoffs are here, with 16 teams vying to hoist the Stanley Cup. The festivities begin April 10 and will be concluded in June.

The Tampa Bay Lightning won the Presidents Cup with 128 points, tying an NHL record with 62 wins. They own the top seed in the Atlantic and will battle the wild card 128 in the first round.

The defending champion Washington Capitals will begin their title defense as the Metropolitan Division champion, facing off against the wild card Carolina Hurricanes in an Eastern Conference first-round matchup. Alex Ovechkin, the NHL’s leading goal scorer with his eighth 50-goal campaign, was a man possessed in last year’s Stanley Cup playoffs, scoring 15 goals in 24 games.

Last year’s playoff darlings, the expansion Vegas Golden Knights, this year are the third seed from the Pacific Division, after advancing to the Stanley Cup Final in 2018, their first season.

Eight teams in each conference make the playoffs, and will battle in best-of-seven series to determine champs from both the East and West. The top three finishers from each divisions qualify for the playoffs, as well as the best two record in each conference outside of that group as wild cards. Higher-seeded teams get home ice advantage regardless of record. All series, including the Stanley Cup Final, are in 2-2-1-1-1 format.

The Stanley Cup playoffs will be televised in the U.S. across NBC, NBCSN, CNBC, USA, and NHL Network, and CBS, SN and TVA Sports in Canada. Online streaming is available in the U.S. through NBC Sports Live Extra and fuboTV, and in Canada by CBC. 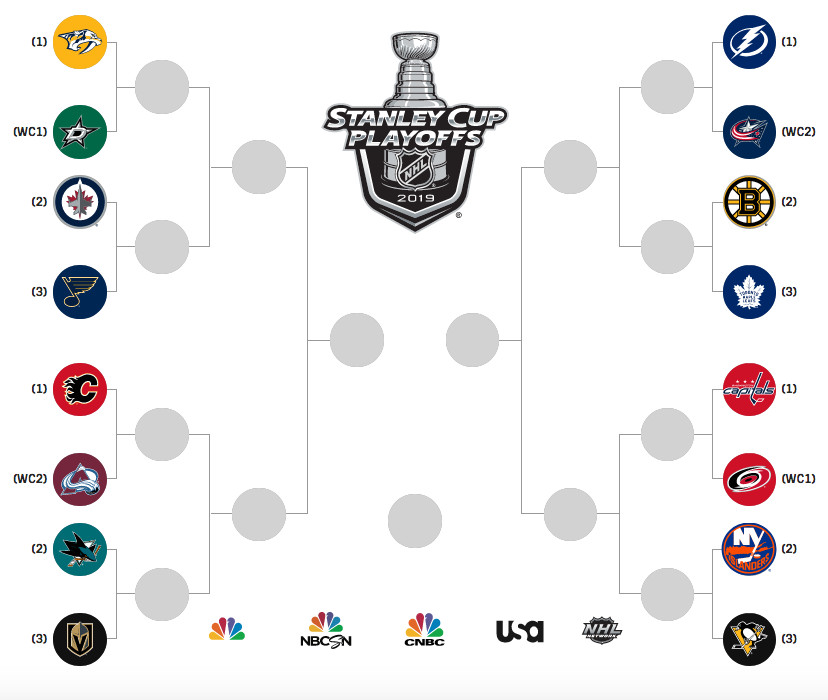 All times ET
*if necessary