Dwyane Wade put up a triple double with 25 points, 11 rebounds and 10 assists in the final game of his career against the Brooklyn Nets on Wednesday. It was a fitting end to a Hall of Fame resumé, the icing on the cake of the one of the best shooting guards to ever play the game.

But as good as Wade was on the floor, the moments and people that accompanied his final NBA game were even better. LeBron James, Carmelo Anthony and Chris Paul each came out to support their friend in his farewell game. So did Wade’s wife, Gabrielle Union, and every Heat fan alive in New York City. It set the scene for an incredible game with off-the-court moments that could go down as one of the best career-ending games ever.

Reuniting with the Banana Boat Crew

LeBron couldn’t make it to Miami for when Chris Bosh got his jersey retired, but he made 100 percent sure he was able to travel to New York for Wade’s final game. So did Melo and Chris Paul. They greeted him on the court before the game.

Gabrielle Union shot t-shirts out of the cannon 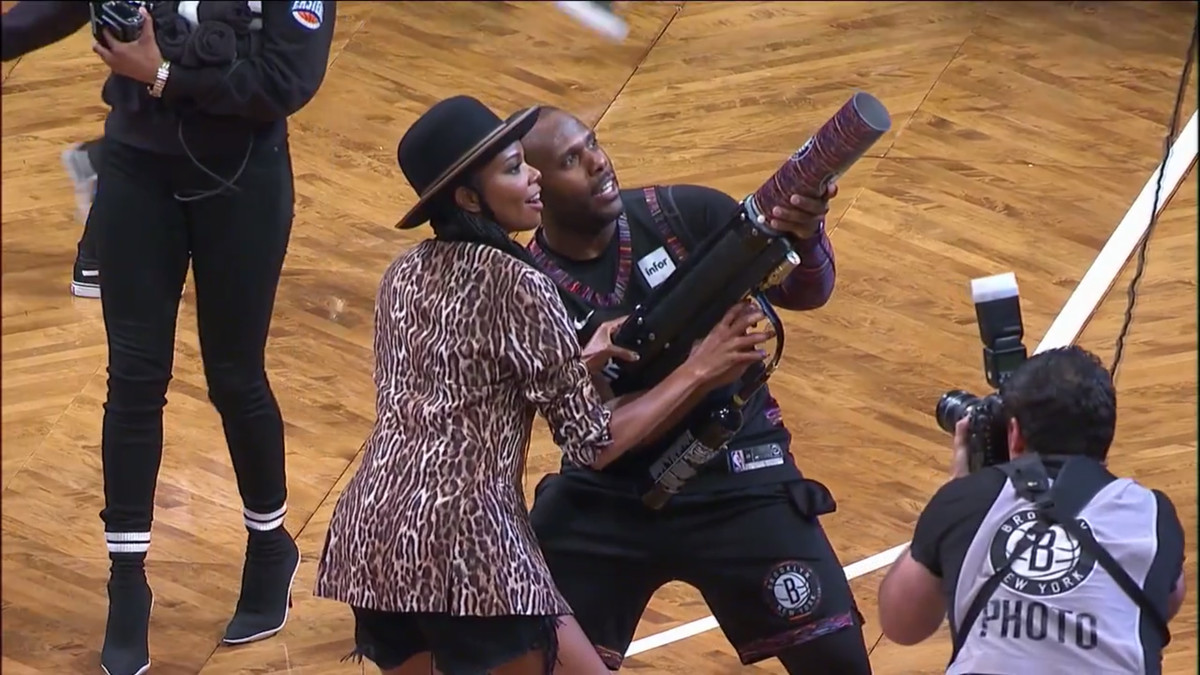 No, seriously. Wouldn’t you?

It’s rare when fanbases come together to boo a common enemy. Nets fans had their own relationship with Pierce, after the franchise mortgaged its future for him, Kevin Garnett and Jason Terry in the Billy King era years ago. Heat fans, among others, didn’t appreciate when Pierce said on real-life live television that he had a better career than Wade.

“You give me Shaq, you give me LeBron. I’d be sitting on five of six championships,” he said.

So the two sides joined together bashing Pierce in Wade’s final game. How fitting.

Melo had his moment

Melo sat court-side with LeBron and Chris Paul, and a loose ball bounced his way. So he took a dribble to the corner and pump-faked a three. Fans were begging for him to shoot, but he chose not to.

LeBron videobombed Wade after the game

LOOK AT THIS FACE!

Melo, Paul and James knew Wade was one assist shy of a triple double. So when he got it — appropriately a dime to Heat lifer Udonis Haslem — they went crazy.

This video just speaks for itself.

So does this one: