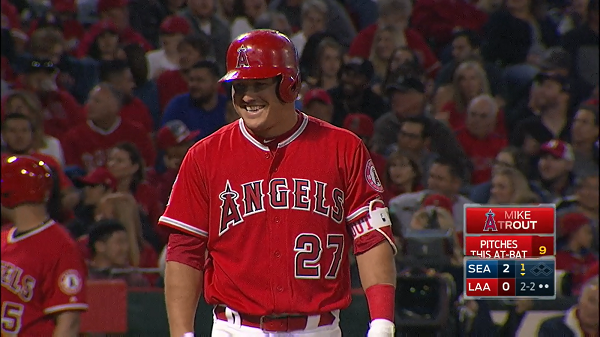 The baseball world suffered a brief moment of shock on Tuesday night. Mike Trout, who needs no introduction within this interrupting clause to emphasize his greatness, was replaced by Peter Bourjos in the fourth inning of the Angels-Brewers game. Afterwards, Trout was diagnosed with a mild groin strain, and baseball collectively breathed a large sigh of relief. It appears that he plans to miss just a single game with the injury.

Before Trout exited on Tuesday, however, he had already gone 2-for-2 at the plate, adding yet another game to his hot start; in 49 plate appearances this season, Trout is slashing .406/.592/.938. Even in a brief outing, his WAR total still managed to increase, moving from 1.2 to 1.3. As of Wednesday, he is tied with Cody Bellinger for the major league lead in WAR rounded to one decimal place.

As we all know, Trout is the WAR king. He’s already put up 66.2 WAR in his career, making him the most valuable player in baseball since 2006, even though his career didn’t even start until 2011 and his first full season didn’t even come until 2012. I could go on and on about how great Mike Trout is at producing WAR, but a lot of those articles have already been written here and at other places.

One article that did catch my attention, however, was this 2015 piece from August Fagerstrom titled “Getting Mike Trout to 168.4 WAR.” In this piece, Fagerstrom outlined a potential career curve for Trout to hit 168.4 total WAR, a mark that would tie him with Babe Ruth for the most WAR produced by a single player in baseball history.

In this piece, I plan to do something similar but different. As in Fagerstrom’s piece, I want Trout to tie Ruth, but on a different WAR leaderboard: the all-time single-season mark.

So, it’s now time for me to ask the central question of this piece: What numbers would Mike Trout have to put up to produce 15.0 WAR in a season? With no disrespect to Bellinger, who also has 1.3 WAR this year, Trout is the only player in baseball who could even potentially sniff a 15-win season. Yes, he is currently “on pace” for 17.6 WAR, but since his career high is “only” 10.2 WAR, Trout would need to have a massive improvement this year in order to even come close.

The answer to this question is not as complicated as you may think it is. In fact, I am able to come to a pretty concrete answer, just through reverse-engineering our WAR formula. For those unfamiliar about how WAR is calculated, it’s broken into six main components: Batting Runs, Base Running Runs, Fielding Runs, Positional Adjustment, League Adjustment, and Replacement Runs. On our leaderboards, we combine Batting and Base Running Runs to produce an “Offensive Runs” total; likewise, for defense, we combine Fielding Runs and Positional Adjustment to produce a “Defensive Runs” total. When calculating WAR, you sum those six components to determine how many runs a player is worth, and then, you divide them by the runs per win factor (something that changes on a year-to-year basis) to get a player’s WAR.

Using this same concept, we can calculate what Trout would need to do in order to produce 15.0 WAR over the course of the 2019 season.

Unfortunately for Trout, some of his RAR is outside of his control. His Positional Adjustment is his Positional Adjustment. The same goes for his League and Replacement Level adjustments. These figures fluctuate from year-to-year, but let’s assume that Trout will play an entire, 155-game, 650-plate appearance season in center field. I’m factoring in seven games off because it’s rare to play 162, and we already know that Trout will miss at least one game due to his injury. Nonetheless, he’ll still need a lot of playing time to catch Ruth.

Based on the calculations for Positional Adjustment, League Adjustment, and Replacement Level Adjustment, this means that Trout would receive about 2.4 runs, 1.7 runs, and 20.3 runs from each of these components, respectively. Unfortunately for him, these factors are, for the most part, outside of his control. On the bright side, Trout hasn’t done a single thing on a baseball field in this scenario, and he has accumulated 24.4 of the 152.25 RAR he needs to hit the 15.0 WAR mark. We’re 16% of the way there.

Moving on, let’s talk about defense. This can be a little bit tricky. For the general baseball fan, it’s not always easy to see a player’s defensive contributions in the same light as their offensive ones. That’s why, at least for me, it’s hard, even in this scenario, to think that Trout will become the Andrelton Simmons of the outfield and start to rack up a ton of Defensive Runs. So, for simplicity’s sake, let’s assume that Trout manages to post 25 runs in center field. This might be a bit of a stretch, but, to be fair, this entire article is a stretch. Trout would need to have a historic season in center, and it’s not like 25 Fielding Runs has never been done before; in fact, 2011 Brett Gardner posted a massive 26.7 fielding runs in the outfield. This brings our total up to 49.4 RAR.

Additionally, Trout isn’t known to be a burner on the bases lately, but he did manage to post 14.3 Base Running Runs in 2012, the highest mark among outfielders since 2010. Trout certainly doesn’t run as well as he did then, so let’s say he puts up 10 more this season, bringing our total RAR up to 59.4, still 92.85 RAR shy of the mark necessary to hit the legendary total.

The rest of Trout’s value, then, must come from his bat. That won’t be easy, but is it even doable? Let’s take a look. Batting Runs is somewhat of a complicated formula, but, like with the rest, we can reverse engineer it to get exactly the 92.85 RAR that we need. Batting Runs is pretty much just a park- and league-adjusted version of Weighted Runs Above Average (wRAA), which is really just a volume-adjusted wOBA, but, alas, we must calculate all of this out. So, in order to accumulate the remaining 92.85 RAR that Trout needs, he’d have to produce a total of 87.38 wRAA. This paragraph was kind of a snooze-fest, huh?

This is where the offensive value gets interesting. Knowing that Trout needs to produce 87.38 wRAA, we can convert this back to wOBA, a more accessible statistic that will tell us just about how well Trout will need to hit. The conversion from wRAA to wOBA is: wRAA = ((wOBA – lgwOBA)/wOBA Scale) * PA. Using basic algebra, we find that Trout needs to post a .4791 wOBA over 650 plate appearances to produce the wRAA he needs to put up the 92.85 offensive RAR necessary to hit 15.0 WAR.

Could Trout ever post a full-season wOBA of .4791 or higher? Since 2000, only one player has ever posted a wOBA that high: Barry Bonds, who posted a wOBA over .500 in each season from 2001 to 2004. But because Bonds was not exceptional on the bases or on defense at this point in his career, he only topped out at 12.7 WAR at any point in those four seasons, with that mark coming in 2002.

The first player on the single-season wOBA leaderboard in this timespan not named Barry Bonds is Manny Ramirez, who, in slashing .351/.457/.697 over the course of 532 plate appearances, posted a .477 wOBA in his 2000 campaign. Trout would have to hit something in that realm — in the ballpark of a 1.150 OPS or higher — to even have a shot.

As I’ve said all along, the odds that Mike Trout puts up a 15.0 WAR season are slim. In fact, they’re probably close to zero. This assumes that Trout puts up career years in every facet of his game; it’s hard to expect something like this to happen in actuality, but as always, this whole exercise was supposed to be just a fun experiment, and Trout has a way of surprising.

Let’s just hope that Trout gets well soon; it sure would be fun to watch him attempt to chase a 15.0 WAR season.