GREEN BAY, Wis. — There’s brighter paint in the hallways, new motivational messages on the walls, and the players all have different seating assignments in the team meeting room. 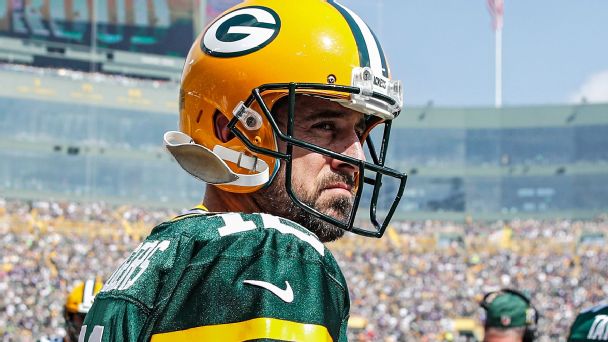 “Well, it is exciting; it feels like the first day of school and you have a bunch of new teachers around,” Rodgers said during a radio interview this week on ESPN Milwaukee. “There’s been a lot of little changes. They painted in the walls in the hallways like a bright white. It’s always kind of been a little bit dimly lit, and just little changes like that have been good.

“They put up some murals around there, some sayings in the big team room. They changed some things around. Matt has switched seats today. It’s a new start, so we’re going to switch seats. I’ve been sitting in the same seat for 14 years.”

What matters is how Rodgers, with his first new coach in 13 years, and LaFleur hit it off.

They’re closer in age — Rodgers at 35 and LaFleur at 39 — than any quarterback-head coach combination the Packers have had in decades, which some believe will help forge the bond. But Rodgers has more NFL experience (14 years) than LaFleur, who didn’t enter the NFL coaching world until 2008 — which was Rodgers’ third year in the league. Some believe that won’t help the coach win the quarterback’s trust and respect.

Whatever anyone believes, the Rodgers-LaFleur connection was always going to be priority No. 1 for both men. But given the renewed discussion about Rodgers’ relationship with LaFleur’s predecessor, Mike McCarthy, the lens power on the microscope that will be used on their union has increased.

It’s why Packers president Mark Murphy told ESPN in February at the NFL scouting combine that Rodgers “has to embrace it,” referring to the coaching change. In addition to LaFleur, who will call plays and said he plans to be in every quarterback meeting if possible, offensive coordinator Nathaniel Hackett and quarterbacks coach Luke Getsy will be directly involved with coaching Rodgers.

Aaron Rodgers is of the mind he and the new staff don’t need a year of transition in order to win big. Stacy Revere/Getty Images

Before this week, all Rodgers and LaFleur could do was talk informally and in football generalities. But all the while, LaFleur had been preparing to dive into specifics once NFL rules allowed. The Packers reported Monday for the start of the offseason program. By then, LaFleur had watched all of Rodgers’ snaps from the previous two seasons and selected video from seasons as far back as at least the Super Bowl year of 2010.

“Shoot, we pulled up a clip from [2010] the other day when he was playing the New York Jets,” LaFleur said last month at the NFL annual meetings. “Some of the traits you always look for in a QB, it’s always stuck out in my mind, they were playing the Jets and they brought an internal cross-dog blitz and he hit Jordy [Nelson] over the middle. It’s what we call our ‘no flinch.’ There was a free runner, I think it was Bart Scott came running in there free and just how [Rodgers] stood in the pocket and delivered an accurate ball and took one; really he got folded in half like a suitcase. But that’s one of my all-time clips of him, one of my favorite clips of him.”

Already, Rodgers said he believes the transition is “going to be a fun process.”

While some might expect it to be a long process before it translates to on-field success — especially considering that even Mike Holmgren, Mike Sherman and McCarthy didn’t make the playoffs until their second seasons despite having Brett Favre or Rodgers at quarterback — Rodgers said he’s not looking at it that way.

“We should expect us to bounce back,” Rodgers said. “I expect to, our team expects to. I’m excited about the additions that we’ve made, I love [returning defensive coordinator] Mike Pettine; I think he’s a fantastic coach. And, you know, there’s going to be no excuses this year. We don’t need a grace period. And we all expect to get something rolling and hopefully we can get that rolling and come together as a team and do something great. There’s 32 teams that think they can win it. We’re one of them. But I think we all know there’s only eight to 10 every year who have that something special, and I hope we’re one of those eight to 10 when it comes to September.”