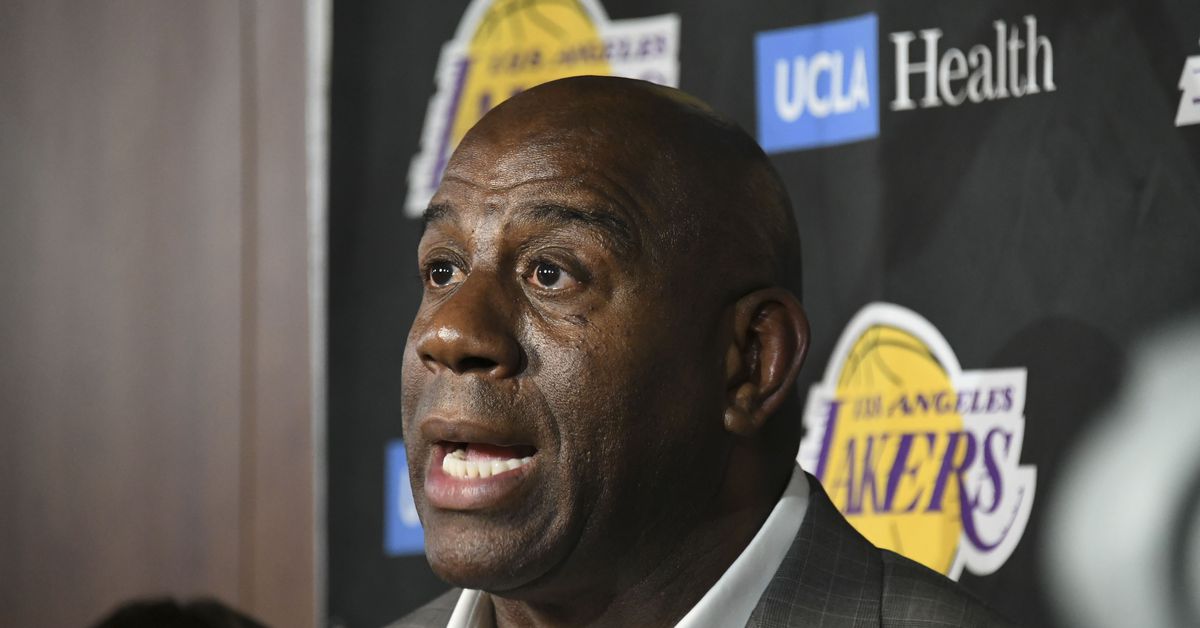 Magic Johnson has stepped down as Lakers president of basketball operations, a moment that has inspired mixed emotions from fans across the country. The Lakers have been one of the most disappointing stories of the season. After signing the best player in basketball, they will miss the playoffs with the sixth-worst record in the Western Conference.

Los Angeles’ struggles are not all LeBron James’ fault, though his groin injury cost the Lakers some games, and his despondent, lackadaisical temperament rubbed off on his teammates. The brunt of the blame falls on the front office, for setting up this team for failure, one botched decision after another.

Magic Johnson officially replaced Jim Buss as president of basketball operations on Feb. 21, 2017. The NBA’s trade deadline was Feb. 23, but George didn’t inform the Pacers he wouldn’t be re-signing with them until June.

The Pacers, according to ESPN’s Adrian Wojnarowski, would have dealt George to the Lakers if they included one of Brandon Ingram or the No. 2 overall pick of the 2018 NBA Draft in the deal. Johnson chose not to.

Instead he bet that George would sign with his hometown team when his free agency rolled around one summer later. He didn’t want to pony up the assets or young players Indiana wanted.

He lost that bet, badly.

The Pacers dealt George to Oklahoma City for Domantas Sabonis and Victor Oladipo (a steal for the Thunder at the time, which has since proven to be an incredible deal for Indiana), and Russell Westbrook convinced his new All-Star teammate to re-sign in OKC — at a discount: four years, $137 million.

Forget the fact that Russell has turned into a legitimate star in Brooklyn, the type of player who could take the pressure off of LeBron James as a real-life playmaker on this Lakers roster. (Actually, don’t forget that. Let it marinate.)

Johnson said Russell wasn’t a leader, then traded him to Brooklyn before drafting his replacement. Talk about workplace culture. Who would feel secure in their job after watching the best point guard of all-time publicly humiliate a budding star before sending him off elsewhere?

The jury is still out on Russell, and the Lakers did get the pick that became Kyle Kuzma as part of the deal. The Lakers also unloaded Timofey Mozgov’s contract in the Russell trade, which allows them to pursue a second max free agent they otherwise would not have been able to afford.

No, signing LeBron James wasn’t a bad idea. It was the best possible outcome for the Lakers to land the biggest fish on the face of the planet.

But when you sign LeBron James, you absolutely have to have at least a second star, ideally a third. James can’t do it all — not anymore, not at his age, not with the mileage that’s been accrued over the course of his Hall of Fame career.

LeBron, though, is at his absolute best when you surround him with sharpshooters. So what did Johnson and Rob Pelinka do? They put absolute non-shooters on the roster. Johnson said he looked at what worked in the playoffs, and he astutely gathered that the teams with success had multiple players who could handle the ball.

So Johnson signed Lance Stephenson, Michael Beasley, Rajon Rondo and JaVale McGee. Hindsight is 20/20 and if Johnson could do it all over again, he probably wouldn’t sign so many non-shooters. But everyone knew this was an awful idea. Everyone except the person who handed out the contracts.

If there’s one rule an NBA executive shouldn’t break, it’s this: you can’t tamper with other teams’ players. Especially if you’re already the biggest name in the history of the team in the biggest (or second-biggest) market in the NBA. Not only is it not necessary, but it’s disrespectful to the teams that don’t have the allure of a Los Angeles, or a New York, or a Philly or Chicago.

It’s not even like Magic was discreet with his tampering: he literally went on Jimmy Kimmel Live and played out a hypothetical scenario about bending the tampering rules if he ever saw Paul George.

The Lakers were fined $500,000 soon after (not because of this, but because of Rob Pelinka’s “impermissible contact” with George) — THEN THEY DIDN’T SIGN PAUL GEORGE.

Los Angeles was also fined $50,000 for Johnson’s comments praising Giannis Antetokounmpo, created a controversy after almost agreeing to train Ben Simmons, and also got into the hot seat for trying to poach Anthony Davis in broad daylight.

More on that coming soon.

Ah yes, how could we forget? Not only did Johnson chase after Davis — likely at the behest of LeBron James and Rich Paul — but he literally offered every single player or asset not named LeBron James as part of the deal.

Literally. This is a real trade offer:

Other versions of this trade included Josh Hart, Kentavious Caldwell-Pope, JaVale McGee and Ivica Zubac. Johnson literally offered every single player for Davis. The Pelicans, it appeared, never intended to trade him there in the first place.

The thing about this offer, though, is that it was public — super public. NBA trade rumors usually are. It was so public that it was embarrassing for the players, and it created a real-life rift between LeBron — who obviously was the engine behind the Davis trade attempt — and the rest of the team, who were set to be cast aside like cattle, as if they meant nothing.

This was the critical moment that doomed the Lakers in the LeBron James era. Just like he blew the Cavaliers up when things went sour in his final year in Cleveland, he wielded the power to obliterate Los Angeles’ roster at a whim. And Johnson sided with one player instead of the majority.

Zubac was a beloved Laker. He was a young big man who many believe still has a promising future, and most of all, he was reportedly a locker room favorite among his younger teammates.

Johnson dealt that player and Michael Beasley for Mike Muscala, a streaky shooting stretch four who was just traded to the Clippers from the 76ers. Not only is Muscala having a down shooting season from behind the arc, he’s also only playing just 14 minutes a game.

That trade was such a terrible idea, Doc Rivers didn’t believe it would actually happen. And when it did, Clippers brass laughed at the Lakers after the deal was done. Literally. The headline for Bleacher Report’s Timothy Rapp’s story was “Jerry West, Clippers Brass Reportedly Laughed at Lakers After Ivica Zubac Trade.”

“Shortly after the trade deadline, Clippers consultant Jerry West—who spent more than 40 years with the Lakers as a player, coach and executive—got together for dinner with old friends who also had former Laker ties, sources said. He couldn’t believe how Zubac fell into his lap. The Clippers, sources said, never even called the Lakers to inquire about Zubac. The Lakers made the offer and the Clippers gladly accepted.

“Sources said those at the dinner table shared a hearty laugh at the Lakers’ expense.”