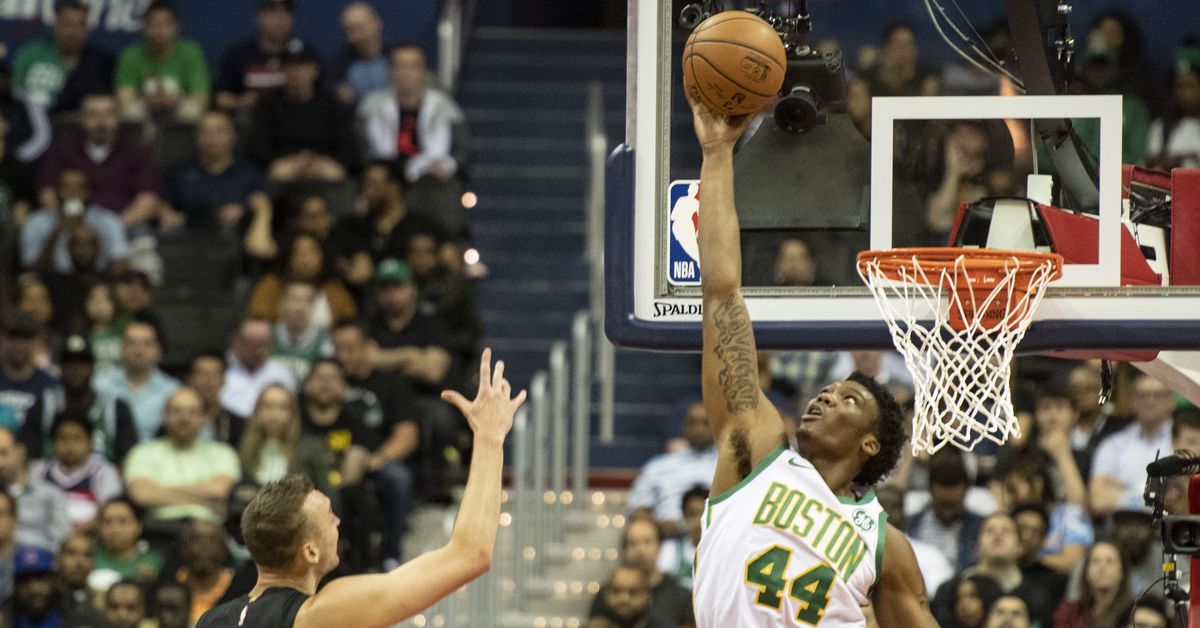 With only 10 players dressed and available tonight, Boston had to make use of the full compliment of 17 for Game 82 in Washington, including Red Claw two-way players P.J. Dozier and R.J. Hunter and today’s recent signing Johnathan Gibson. Brad Stevens opted for a respectable lineup of rotation / fringe rotation players to start, giving the nod to Guerschon Yabusele, Robert Williams III, Jaylen Brown, Terry Rozier and Semi Ojeleye.

Jaylen Brown had 15 points and 3 steals in his 2nd game back from back spasms and started very well hitting on drives and 3-pointers. However the Celtics struggled to keep pace with the Wizards who were hot in the early phases, shooting 60% from the field including a pair of threes from unlikely Center pair Ian Mahimi and Thomas Bryant. All Star Bradley Beal was on a different level though, tallying 14 first quarter points alone to helped the Wiz finish strong in the first quarter up 39-25. Beal would end the game the first player in franchise history to average 25ppg, 5rpg and 5 apg.

In a scrappy up and down affair, Boston gunner RJ Hunter (17 points, 4-10 from three) provided an instant spark with a pair of threes early in the 2nd quarter to keep the C’s within striking distance of Washington. The 2nd quarter return of Terry Rozier back into the lineup also yielded instant returns as Playoff Terry ramped up the level to 11, with a pair of irrationally confident triples. Speaking of loud plays, the couple of hundred Celtic fans in Washington got very rowdy indeed courtside as Rob Will aka “Boo Butt” spiked a ball past half court.

In a game which would serve as a league-wide scouting showcase for young talented players, PJ Dozier, whom struggled early with his shot, had a series of neat passes logging 5 assists in the first half and exploded down the lane for an impressive jam that will surely find its way onto the NBA highlight reels. As much of a disappointment the 1st quarter was, the Boston Summer League-esque Celtics chipped away at the lead to claw back to within a single point at half time 64-63.

With Washington resting Bradley Beal for the second half, the Wizards looked to the 3rd year Czech Tomáš Satoranský who kept the points ticking over in the capital, spearheading a 13-1 run for the Wizards. Boston, was forced to play catch up once more however the 3rd quarter was strictly a trading baskets affair.

As the fourth quarter opened it took a balanced offensive and defensive stretch from a lineup of Semi Ojeleye (17 points), Brad Wanamaker (17 points), P.J. Dozier (12 points, 11 rebs), Robert Williams (3 blocks, 11 rebs) and R.J. Hunter to get the lead back. With 7 and half minutes to go in the game, cometh the moment, cometh the man as R.J. Hunter, whose three pointer, mid-range 12 foot jumper and a deep banked triple gave the C’s a 6 point lead they would never relinquish.

Boston will face Indiana in round one of the 2019 NBA Playoffs with home court advantage, the NBA is set to release the full schedule upon conclusion of games tomorrow.