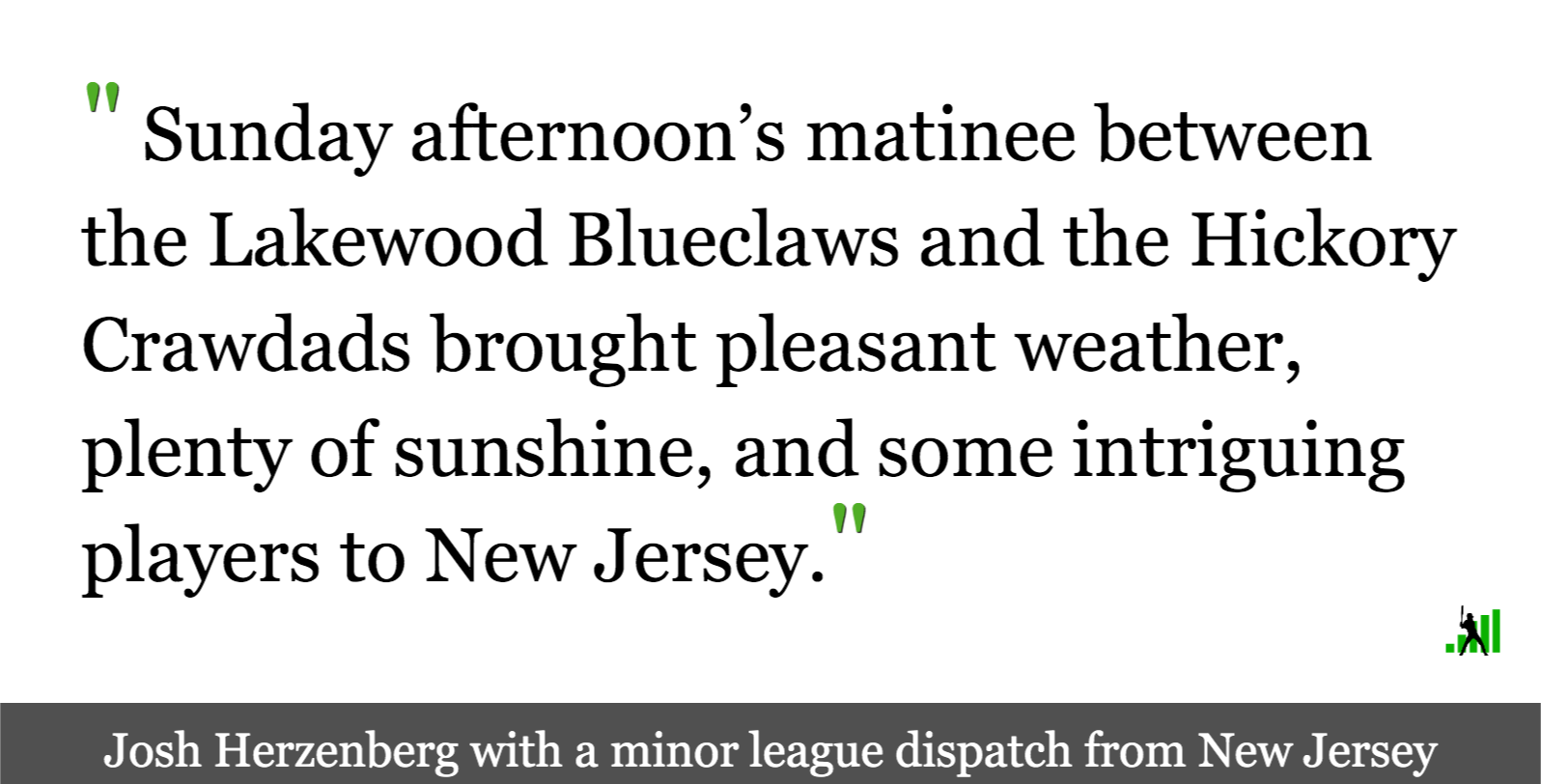 Editor’s Note: Josh Herzenberg spent three years as an area scout covering North Texas, Oklahoma, and Arkansas for the Dodgers. He also spent two years coaching, one with the Ogden Raptors and one with the Rancho Cucamonga Quakes, predominantly working with pitchers and helping to integrate analytics into preparation for minor leaguers. He pitched at Oneonta State and has a Master’s Degree from Georgetown. He currently lives in New York City, where he works in finance, and will be contributing here at FanGraphs.

As someone born and raised in the northeast, the beginning of the professional baseball season has always been a marker, of sorts, of springtime finally arriving. That didn’t change in 2019, as Sunday afternoon’s Low-A matinee between the Phillies’ Lakewood Blueclaws and the Rangers’ Hickory Crawdads brought pleasant weather, plenty of sunshine, and some intriguing players to New Jersey. What follows are some of my notes from that game, with each player’s Top 100 and organizational ranking per Eric Longenhagen and Kiley McDaniel indicated where applicable.

Alec Bohm, 3B, Top 100 Rank: 66, Org Rank: 2
Bohm was the third overall pick out of Wichita State in 2018, lauded as a player with a chance to make an impact as a power hitting third baseman. Physically, he stands out on the field as advertised, with an XL frame and broad, strapping shoulders. There might be some more room to fill out the frame but that also might not be necessary – he’s a large human being already. Bohm smoked a double into right center field in his second plate appearance in what was an otherwise underwhelming day for him. The double – off an elevated sinker out over the plate – was a glimpse of Bohm’s ability to drive the ball, but I’m not convinced he’s going to be able to tap into that power consistently enough for it to make the impact the Phillies were likely hoping it would when they selected him in last year’s draft. He’s very compact and fails to get his hands extended through the zone, resulting in him effectively jamming himself and forcing him to work with a smaller hitting zone because of it.

Defensively, Bohm showed plenty of arm to stay at third base and his footwork was fine. He has long, loping strides and is a slower twitch mover, showing below average range on a play to his left, and running below average times on the basepaths throughout the day. I wouldn’t rule out his ability to stay at the hot corner long term but he will need to work on staying agile as he gets bigger in order to do so. The frame and the power is evident, but the bat path and lack of quick twitch drew some mild concerns in this one game look.

Luis Garcia, SS, Top 100 Rank: NA, Org Rank: 4
Garcia will play the entire 2019 season at age 18 and by the looks of his game on Sunday, he should have no trouble holding his own in the South Atlantic League. An undersized, scrappy middle infielder who made his professional debut last year, Garcia presents himself as more of a jack-of-all-trades player than one with a singular carrying tool. He’s a slick fielder at shortstop with enough arm to stay there and he showed good baseball IQ defensively, especially for a teenager, enough to assume he has the potential to play a super utility role in the future, which would ostensibly bode well given Phillies manager Gabe Kapler’s affinity for versatility. Garcia doesn’t pack a huge punch at the plate but showed a compact, rhythmic approach and good patience. I could foresee an average hit tool at his ceiling with power production that is more doubles- than home run-oriented. Garcia has the ceiling of an everyday player, but also likely has a higher-than-usual utility infielder type floor given his current level of polish.

Francisco Morales, RHP, Top 100 Rank: NA, Org Rank: 9
Morales is another intriguing teenage talent on a roster full of them, and threw well in his South Atlantic League debut on Sunday. A tall, fairly full framed 6-foot-4 right-handed pitcher, Morales fits the bill physically as a workhorse and showed the early makings of a power arm. His fastball ranged from 92-95, touching 96, as he worked into the fifth inning. He showed good plane and was able to generate life through the zone. He leaned fairly heavily on a quality slider in the mid-80s, a short breaker that he seemed to have feel to manipulate to move either horizontally or vertically at will. It showed big league average consistently, with a chance to be better in the future.

Morales’s arm action is just fair, with a long, offline plunging type action and some effort at release. He moves athletically enough to repeat his delivery – especially on his slider – but there is some cause for concern with respect to long term sustainability and lack of a present third pitch to project a starter role long term. I think Morales settles in as a quality right-handed reliever long term with two offerings that are at least 55s, but would give him every chance to start at this point as the body, arm strength, and ability to spin a quality breaking ball stand out.

Victor Santos, RHP, Top 100 Rank: NA, Org Rank: 27
Santos continued Lakewood’s trend of making most evaluators (including this one) feel old, as he won’t be turning 19 until July. An average sized right-handed pitcher who looks relatively generic upon first glance, Santos impressed with his command and his ability to change speeds in Sunday’s extended relief look. After walking less than 2% of the batters he faced in the GCL in 2018, he continued his advanced command in this four inning outing, throwing 38 strikes against just 16 balls. He featured a three pitch mix, with a tailing fastball that worked 88-91, a short, low-80s slider, and a diving low-80s changeup. The changeup was the better of the two off-speed pitches on this day and he seemed comfortable with it in any count.

Santos is off to a fast start in his career and while only his changeup showed as a major league average offering on Sunday, he could have the ability to move quickly through the lower levels of the minor leagues due to his command and feel to change speeds. He’ll be worth monitoring moving forward to see how the stuff plays against better competition, and if it improves as he matures.

Chris Seise, SS, Top 100 Rank: NA, Org Rank: 12
Seise was somewhat of a late riser in the 2017 high school draft class, enough that the Rangers decided to take him with the 29th overall pick out of West Orange High School in Central Florida. Seise flashed some power in his first pro season after signing but missed all of 2018 due to right rotator cuff surgery and is now back on the field and healthy in meaningful games for the first time in about 19 months. At 20 years old, Seise certainly looks the part of a big leaguer, filling out his uniform well with a high waist and very broad shoulders.

He has fluid, athletic actions defensively and moves both ways at shortstop with no problem. His first step quickness is probably about average at this point, which brings up some questions about his ability to stay at shortstop long term as he continues to get bigger. He showed no throwing issues during warmups and made just a few throws in game play, all of which were below average but didn’t necessitate more. I’ll reserve judgment on the arm strength until another look but for now, I’d say there’s enough risk that he doesn’t stay at shortstop due to the first step risk that assessing utility options – whether it be third base or center field (Seise is a plus runner underway presently) – could happen as early as 2019 Instructional League.

Offensively, Seise has something of an all-or-nothing approach, with plus bat speed and strength in his swing. There is some inherent swing-and-miss risk, but he has the ability to impact the baseball. Seise has everyday upside but carries a lot of risk due to questions about where he ends up defensively and if he’ll make enough contact to actualize his impressive athleticism and strength in the box.

Dylan Bice, RHP, Top 100 Rank: NA, Org Rank: NA
Bice was drafted in the 23rd round of the 2016 draft out of a Georgia high school and spent three years in the AZL, including a 2018 season that saw him throw just three innings. Now 21, Bice was impressive in his full season debut on Sunday, throwing 21 of 29 pitches for strikes in two innings of relief. He is a big bodied right-handed pitcher, standing at 6-foot-4 and listed at 220 pounds, although he looks a bit more than that.

He has a long arm stroke and a violent, effort-filled release that generally leads to both reliever projection and command questions long term. I do think Bice is a reliever, but he showed no command issues on this day. His fastball was 94-97 and averaged 96, with steep downhill plane and life through the zone. He throws from a high slot and could probably bode well working up in the zone with his fastball. His breaking ball, sort of a tweener, is currently an 82-85 mph slider that should probably be a curveball to play off a north-south profile long term. Bice showed some feel to spin the pitch and while it is fringy now, it could get to average with better shape. A big bodied reliever without a plus off-speed pitch isn’t someone who generally turns into anything more than a player with marginal impact at baseball’s highest level, but Bice is worth monitoring moving forward due to the big frame and arm strength.