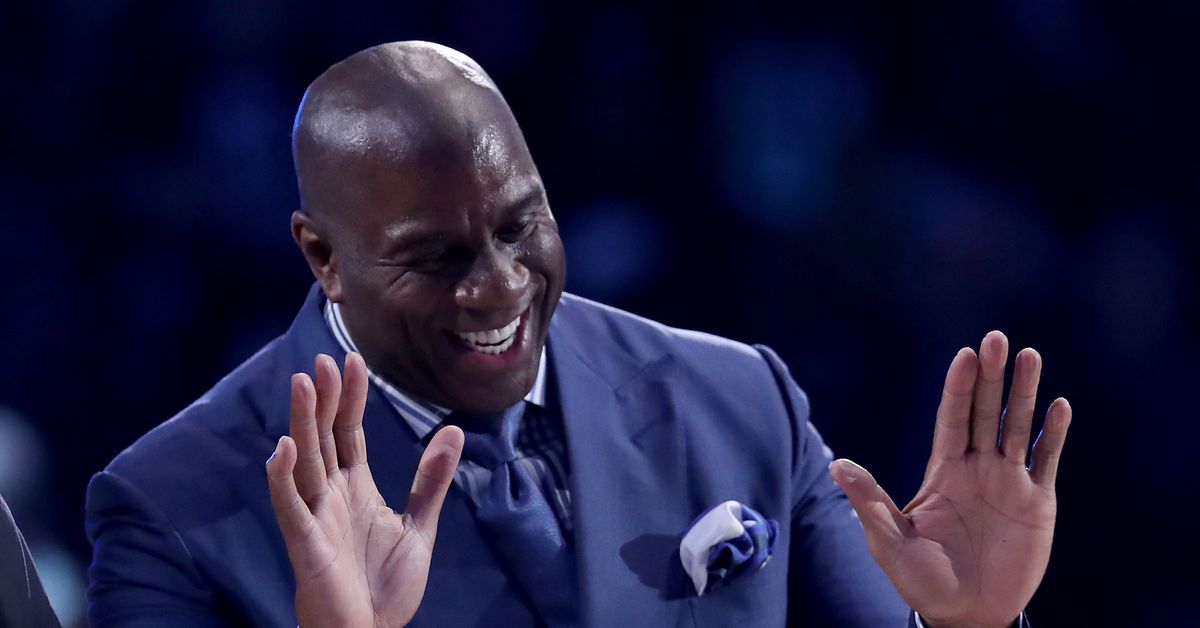 Magic Johnson announced he will step down as the Los Angeles Lakers’ president of basketball operations. He delivered the news himself in an unscheduled 45-minute press conference before the Lakers’ season finale on Tuesday, telling the world before even told his own boss.

“I think that with [Jeanie Buss] and I, I want to always preserve our relationship with her,” he said. “And I think I had more fun when I was able to the be big brother and ambassador.”

Johnson confirmed he did not inform Buss of his decision before announcing it.

Stunning. Magic says he has not told Jeanie his decision.

“Somebody’s going to have to tell my boss because I knew I couldn’t be face-to-face and tell her. … I couldn’t stand to tell her.”

Says what she had in him was someone she could trust and be loyal.

He then lingered, looking to find Buss. When told she would not be attending the game, he then addressed the media again.

Magic was waiting for Jeanie to show up in the parking area. He was told She’s not coming to game. He tried walking out but he’s still doing interviews #Lakers pic.twitter.com/P6CYew3mgp

Magic Johnson said Jeanie Buss will not be at today’s game. He’s going to try to see her either today or tomorrow. Regardless he will call her when he gets out of here.

Calling the decision to resign a “monkey off my back,” Johnson admitted he was “happier” when he was not the Lakers’ president.

Magic Johnson says that his position doesn’t allow him to be a statesman of the game of basketball. He says he wants to go back to his wonderful life away from this position. “I was happier when I wasn’t the president (of the Lakers)”

Magic: “I’m a free bird and I’ve been handcuffed. And I don’t like that.”

He admitted that he was especially stung when a comment about Philadelphia 76ers star Ben Simmons reaching out for advice to improve his game turned into a tampering investigation. He did not always seem invested in the job, according to ESPN’s Adrian Wojnarowski.

Since taking over as president of the Lakers, Magic Johnson never fully committed to the job. Often he was traveling and away from the team. His office hours were limited. He didn’t do a lot of scouting. Running an NBA team takes a tremendous commitment of time and energy.

In spite of having early success starting with the 2017 NBA Draft, where the team was able to pick up Lonzo Ball, Kyle Kuzma, Josh Hart and Thomas Bryant, it appears as though the job was harder than Johnson anticipated it to be.

Like the front office regime before him, Johnson was banking on the luster of the Lakers to lure free agents to Los Angeles and while he was able to sign LeBron James — the biggest fish in the pond — last summer, every move he’s made since then has been subject to strong but warranted criticism, including his decision to let Thomas Bryant, Julius Randle and Brook Lopez walk in free agency, his decision not to pair James with shooters and most recently his decision to trade Ivica Zubac to the LA Clippers for Mike Muscala.

Johnson took over the Lakers’ front office from Mitch Kupchak and Jim Buss in February of 2017. His tenure was defined by cap-clearing moves that eventually secured LeBron James, followed by a disastrous offseason and 2018-19 campaign that ended in another losing record, multiple fines for tampering, and the embarrassing Anthony Davis saga.

So what happens now?

It’s unclear. Johnson’s announcement appears to have been a surprise to others with the Lakers as well.

Takeaways from Magic Johnson’s abrupt resignation:
– he has not told ANYONE before this moment
– he didn’t like restrictions on what he could do and say
– he seemed to have disagreements with Jeanie Buss and Luke Walton over the direction of the team

Johnson and Walton have reportedly clashed all season, which was widely expected to lead to a coaching change in the summer. Johnson initially denied the decision to step down was explicitly due to those disagreements, but later admitted he didn’t feel comfortable having to potentially make a new coaching hire.

The future of general manager Rob Pelinka is also unclear. Johnson did not offer him much of an endorsement.

Magic: “Do I think Rob is the right GM? That’s a decision Jeanie has to make.”

But Johnson did express optimism about the franchise’s future, joking that Buss will get tons of calls about the position.

Magic on the allure of the job he is vacating: “Everything is in place. We add one guy, and this team is in the Western Conference Finals.”