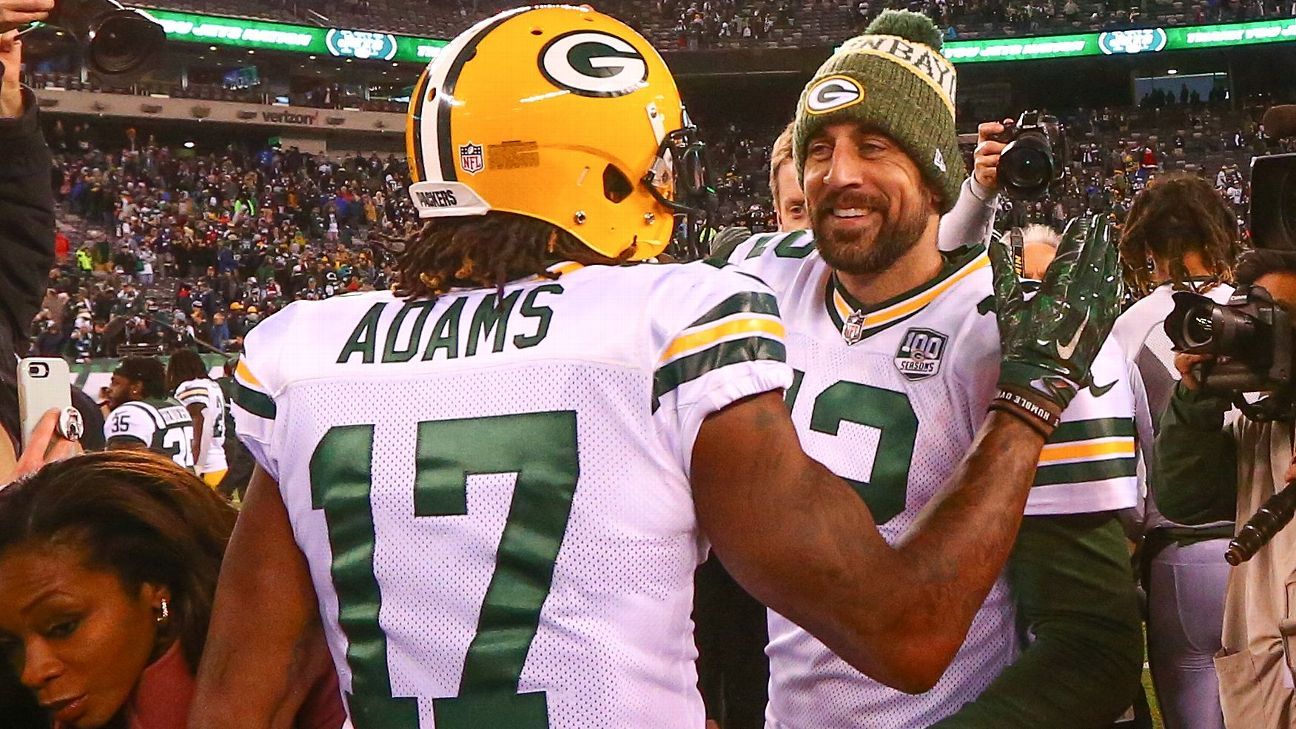 GREEN BAY, Wis. — Davante Adams has been by Aaron Rodgers‘ side through the past two seasons, both of which ended without a playoff berth, and this offseason when the Green Bay Packers quarterback’s leadership once again came into question.

Adams thinks he knows how Rodgers will respond.

The Pro Bowl receiver believes Rodgers will want to silence everyone with his play, which hasn’t been up to his usual standards since he broke his collarbone early in the 2017 season and then suffered a 2018 Week 1 knee injury, the details of which he finally revealed this week.

“I want to; I know he does,” Adams said Wednesday during a break from the Packers’ offseason program, which began under new coach Matt LaFleur on Monday.

“The way I feel as a player and as a teammate and how I feel about my guys, I’ll run it back for anybody. You see it. Not very many people — you think about the Tennessee game when [Rodgers] got hit in the end zone [and teammates came to his defense]. Does that look like a guy who’s not a good leader and doesn’t have his guys behind him? Obviously, I was one of the first guys there. It’s not even about me. That thing turned into a scuffle quick. That’s not even important really, but it’s pretty clear how we feel. All the people who matter at this point, they’ve shared their feelings and here we are.”

Many questions during Wednesday’s session with reporters centered on last week’s Bleacher Report story that detailed allegations of dysfunction in the Packers organization related to Rodgers’ leadership and his relationship with former coach Mike McCarthy. Earlier in the week, Rodgers disputed the notion that he had a long-running feud with McCarthy.

Rodgers said he has received more than a 100 calls and messages from current and former players and coaches since the story ran.

“I feel like I’ve made it pretty evident how I feel about it already,” Adams said. “It’s something I’m really trying to put in the past at this point because it’s nothing really to continue to drag on. I think you’ve heard from all the people who are relevant at this point and actually matter, which are the people who play with him and played with him recently, and have those good relationships with him. I think it’s pretty uniform as far as how we feel about him. He’s a great leader. All the negative things I’ve heard, I share none of those feelings with those guys. Nobody reached out to me. Nobody reached out to James Jones. Nobody reached out to Jordy Nelson, Randall Cobb or any of these guys that obviously had a good relationship with him. I think if those people were interviewed about him, then the story would’ve been a lot different.”

Rodgers did not address the story with his current teammates, according to Packers linebacker Blake Martinez.

When asked whether he wanted to prove people wrong, Rodgers made it more about the team than himself.

“I think we all do,” Rodgers said. “We had a standard here of going to the playoffs every single year. We did that eight years in a row and we were competitive and in the mix, and then the last couple of years obviously have been frustrating to finish. I think we’re in a good spot. Like I said a couple of days ago, I think there isn’t a grace period. This isn’t like other transitions where you maybe give a pass for the first year or two as you get acclimated to the system. We have a veteran quarterback, veteran offensive linemen, we signed some big free agents for us, especially three on defense. There’s an expectation living and playing here that you’re going to compete for championships and I think we all expect to do that.”