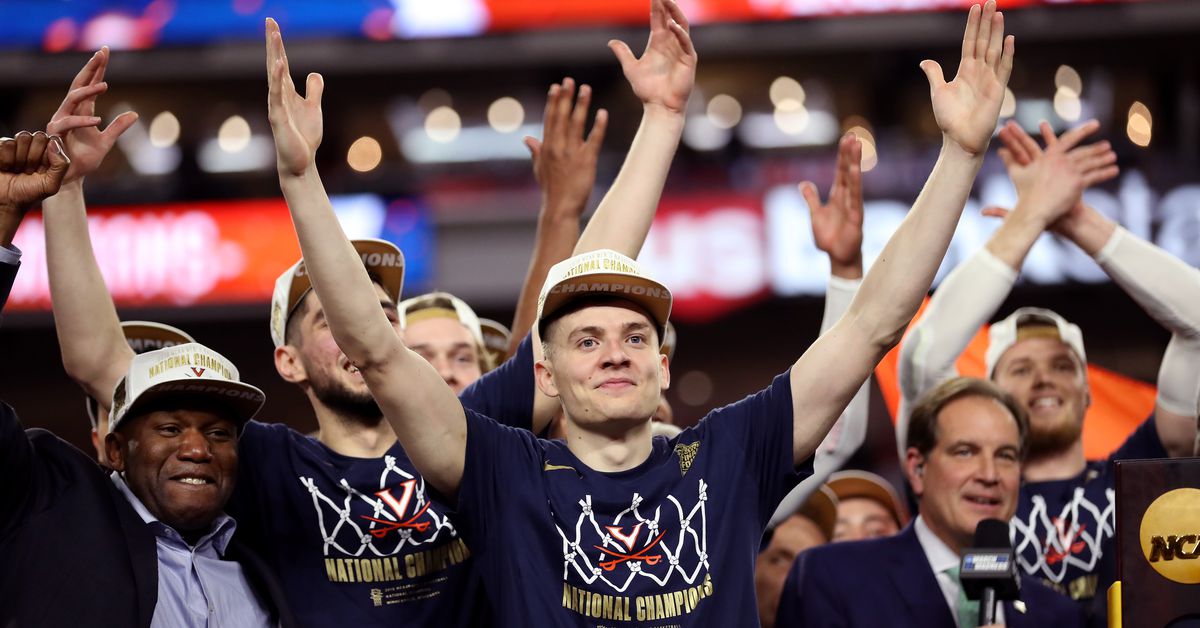 Over the next two months we’re going to see hundreds of college hoops roster shakeups thanks to NBA Draft declarations, transfers, and other early offseason madness. After that, the summer months will bring even more unforeseen changes to a number of teams on this list.

And yet, these early top 25 rankings are guaranteed to be 100 percent accurate throughout college basketball’s offseason. There’s no argument to the contrary, so don’t even try.

The biggest criticism these rankings received a year ago stemmed from Virginia being at No. 2 despite being just three weeks removed from its historic first round loss to UMBC. There figures to be less pushback on the Cavaliers’ lofty early status this year.

The recently crowned national champions are definitely losing Jack Salt to graduation, almost certainly losing De’Andre Hunter to the NBA Draft, and might very well be losing Ty Jerome to the professional ranks as well. Even if both those underclassmen stars leave, Tony Bennett will return key contributors in Kyle Guy, Braxton Key, Mamadi Diakite, Jay Huff and Kihei Clark. Recent history has shown us that those pieces should be more than enough for Bennett to put together yet another national title contender.

If reigning Big Ten Player of the Year Cassius Winston chooses to return, Tom Izzo will likely bring back his top four scorers from a team that came two wins away from a national championship. Included in that group is junior guard Joshua Langford, who missed all but 13 games this season because of a stress injury in his left foot. Gifted forward Aaron Henry showed glimpses of his potential late in the season, and has the potential to be a star as a sophomore. Tom Izzo will also bring in a top 25 recruiting class headlined by 4-star point guard Rocket Watts.

Charles Matthews seems committed to keeping his name in the NBA Draft this go-round, which means the stay or go decisions of Jordan Poole and Iggy Brazdeikis will be even more important than they were before. If both return, John Beilien will lose just one contributor from a team that was one of the eight best college basketball all season long in 2018-19. Even if both choose to bolt, there’s still more than enough talent returning to Ann Arbor for this to be a preseason top 10 team.

The big three are gone, but point guard Tre Jones has already announced that he’ll be back in Durham for his sophomore season. Some mixture from the group of Marques Bolden, Alex O’Connell, Jack White, Javin DeLaurier, Jordan Goldwire and Joey Baker will have to step up and flourish in expanded roles. Another elite recruiting class headlined by 5-star big man Vernon Carey will also help to make life after Zion more than tolerable for the Cameron Crazies.

As always, the who stays/who goes postseason shuffle will play a large part in determining how high the preseason expectations in Lexington will be. Also per usual, an elite incoming crop of freshmen guarantees that said expectations will be respectably lofty. If Tyler Herro or Keldon Johnson were to make an unexpected decision to return, the Wildcats would have a legitimate claim to be a spot or four higher on this list.

Josh Perkins is definitely gone, and the assumption is that Rui Hachimura and Brandon Clarke are as well. If either return, the Zags will be in the top five when these rankings are updated. If oft-injured Killian Tillie decides to get an early start on his professional career as well, Mark Few’s team will be a few spots lower.

Leading scorer Bryce Brown is gone, but there’s a chance Auburn’s top five other scorers could return. The decisions of Jared Harper and Chuma Okeke will loom large here. If both return, Bruce Pearl should have a team capable of making its second Final Four in as many years. The addition of top 50 freshman Isaac Okoro will give Pearl yet another tool to work with.

There may not be an offseason decision that looms larger for a player’s respective team than Markus Howard’s does for Marquette. If the 2019 Big East Player of the Year comes back, the Golden Eagles could easily be Final Four good. If he doesn’t … that’s going to be a much tougher sell.

Jarrett Culver is off to be a lottery pick, but at this point, does it really even matter who Texas Tech is returning? As long as Chris Beard is back in Lubbock, a preseason top 10 spot feels justified.

They occupied just about everyone’s top spot in these rankings a year ago and wound up having a season that didn’t come close to meeting those expectations. Now, this figures to be an extremely interesting offseason for a Kansas program that’s in something of a weird place. Even so, if Devon Dotson, Quentin Grimes, and Udoka Azubuike all return to Lawrence, this could be yet another preseason top 10 team for Bill Self.

Oregon had preseason expectations that were this high a year ago, but never really figured things out until the season’s final three weeks. Bol Bol going down less than halfway through the season certainly played a part in that. Assuming Louis King chooses to delay his professional career by a year, the Ducks should be good at a far more consistent clip in 2019-20. Dana Altman has the team to beat in the Pac-12.

Leading scorers Phil Booth and Eric Paschall are gone, but there’s still reason to believe Villanova will be better in 2019-20 than they were this past season. Collin Gillespie, Sadiq Bey, Jermaine Samuels and Dhamir Cosby-Rountree should all take steps forward. Jay Wright will also welcome a top five recruiting class headlined by two five-star players — Jeremiah Robinson-Earl and Bryan Antoine — who should be good enough to start from day one.

Admiral Schofield and Kyle Alexander have exhausted their ability, and Grant Williams and Jordan Bone both seem more likely to leave than they are to come back. Even so, Lamonte Turner and Jordan Bowden are coming back, and so is head coach Rick Barnes, who officially spurned the advances of UCLA on Monday. Top 20 recruit Josiah James has the potential to be a star.

It seems impossible for UNC not to take a sizable step back after losing Luke Maye, Cam Johnson, Kenny Williams, Coby White and Nas Little. Roy Williams will always find a way to make his teams contenders, but no team in the country needs to sign a recruit more than the Tar Heels need to sign Cole Anthony right now.

Head coach Kevin Willard turned down Virginia Tech, now the Pirates need star Myles Powell to turn down the NBA. If that happens, Willard should have a team fully capable of making Seton Hall’s first appearance in the Sweet 16 since 2000.

Chris Mack’s first season at Louisville was a success in the eyes of most. Year two should be even better. If Jordan Nwora, the ACC’s Most Improved Player for 2018-19, chooses to come back for his junior season, Mack should return all but one of his top eight scorers from last season. He’ll also welcome in a top five recruiting class headlined by 5-star McDonald’s All-American Samuell Williamson.

Jalen Smith has already announced he’s staying, which is massive for a team that was just a few seconds away from the Sweet 16 last season. If Anthony Cowan also returns, the Terps should have an opportunity to right that wrong in about 11 months.

The loss of Corey Davis Jr. is big, but on paper, it shouldn’t be bigger than the loss of Rob Gray was a year ago. Without Gray, Houston somehow managed to get better, and was one shot away from playing Auburn for a spot in the Final Four. At this point, Kelvin Sampson has earned the benefit of the doubt. Bank on the Cougars being back in the national picture.

Assuming Mick Cronin stays put in The Queen City, he should have another club capable of flirting with 30 wins. Unanimous All-AAC selection Jarron Cumberland has the potential to be an All-American.

With the team’s three leading scorers returning and the nation’s (currently) top-ranked recruiting class on its way to Tucson, it’s looking like last season’s disaster may wind up being an isolated incident.

The Gaels only got into the Big Dance because they stunned Gonzaga to win the WCC tournament. Their inclusion in the 2020 field of 68 shouldn’t be laced with nearly as much drama.

Tyler Cook declaring for the draft with no intention of returning knocks the Hawkeyes out of the top 20, but Cook and Nicholas Baer should be the only two players Fran McCaffery doesn’t bring back.

The Rams should return their nine leading scorers from a team that was a single digit seed in the 2019 NCAA tournament.

There’s no question that Penny Hardaway can generate headlines, but the jury’s still out on him as one of the next big-time coaches in college basketball. We’ll be much closer to a verdict after next season when Penny has had a chance to coach a talented roster led by the nation’s No. 1 freshman, James Wiseman.