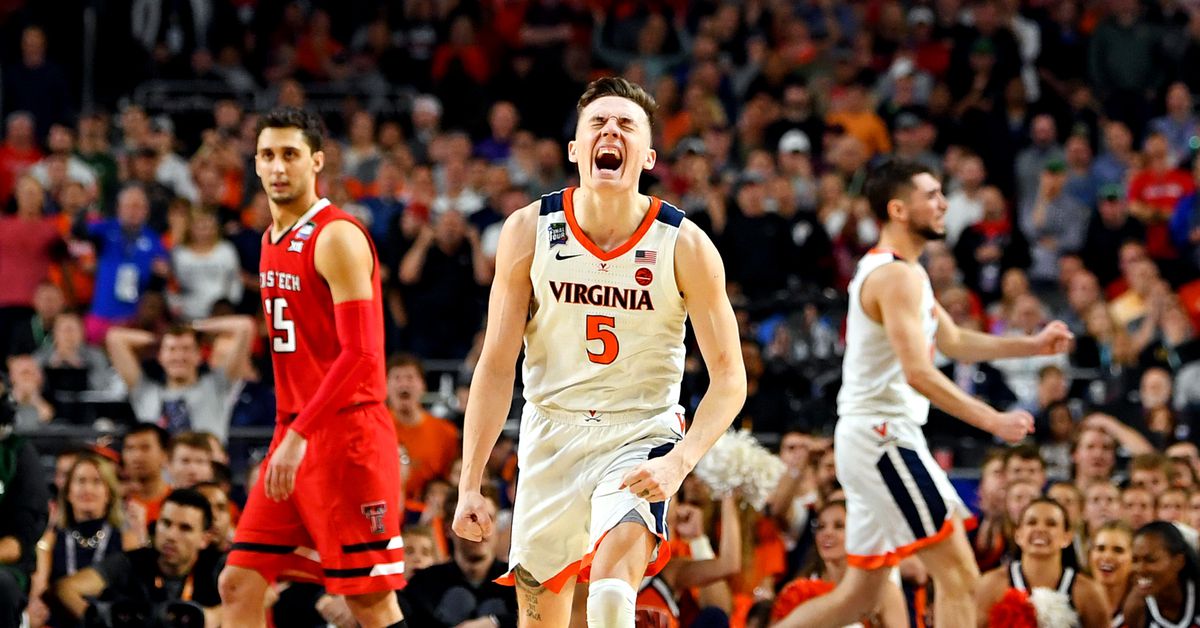 The Virginia Cavaliers are National Champions for the first time in school history. They played an extremely close and entertaining championship game that went into overtime, beating the Texas Tech Red Raiders, 85-77.

Neither team had won a National Championship in college basketball before, so we were always going to get a first-time winner in Monday’s game. Despite the late start time and lack of enthusiasm over the two defensive-minded teams, there was some excellent shooting across the board, especially of the three-point variety, and especially late in the game.

Virginia benefited from a controversial call in overtime. One of their players stripped the ball from Davide Moretti, and it went out of bounds. Instant replay shows that one of Moretti’s fingers grazed the ball as it was being slapped out of his hands, so the officials gave the ball to Virginia, and Tech never recovered. It seemed to drain everything out of them.

Kyle Guy finished with 24 points for Virginia, but De’Andre Hunter was the real star, with 27 points and seven rebounds. Ty Jerome was the other Virginia player to make it into double digits, with 16 points. Hunter went 4-for-5 from range, while Guy went 4-for-9.

None of the Texas Tech players hit 20 points, but Brandone Francis led the way with 17 points. Jarrett Culver wasn’t far behind with 15 points.

The game got out to a slow start, with both teams putting up a stout defense. The first five minutes of the game were virtually scoreless, with a 2-2 tie lasting until there was 16:10 on the clock. Virginia managed to build a nice gap, leading 15-6 at one point.

Tech brought it back though, getting hot with around six minutes remaining in the first half. They managed to tie the game, and even took a lead. A pair of threes from Virginia — via Guy and Jerome — put the Cavaliers back on top, 32-29, when the game went to the half.

Virginia managed to build a lead right out of the gate in the second half, scoring six unanswered points. They maintained about a six-to-eight-point gap over the Red Raiders for much of the second half, with multiple people stepping up for the Cavaliers. In addition to Guy and Jerome, Hunter was having a very good night, especially in the second half.

Francis came off the bench for Tech and played very well, leading his team in scoring as the game was nearing its end. Culver, Tech’s leading scorer for much of the season, struggled big time in shooting. He hit the bulk of his free throws, but struggled elsewhere. Tech went on an 11-4 run late in the second half and that tied the game with just over 3 minutes to go.

Culver picked up his play big time late in the second half, sinking a could free throws, earning an assist on a three from Moretti and hitting a layup all in the final two minutes. Texas Tech took a three-point lead with under half a minute to go, but Hunter sank a three to tie it with 12 seconds remaining.

Texas Tech caught a break when Virginia bungled their final possession, but the Red Raiders couldn’t convert on the inbound play and they went to overtime at 68-68.

Virginia had a late instant replay review go their way, and it helped them on an 11-point run to take a lead with under a minute to go in overtime. Their lead grew, and Tech lost all the air from their sails.

Below is the preview and viewing info that originally shipped with this article.

The Texas Tech Red Raiders and Virginia Cavaliers are in the National Championship game, and both are fighting for their first ever college basketball national title. They’re set to face off from U.S. Bank Stadium in Minneapolis on Monday, with tip scheduled for 9:20 p.m. ET on CBS (live streaming via fuboTV, CBS All-Access, March Madness Live).

It’s been a long road for both teams. Texas Tech’s last few games have included some truly impressive wins over Michigan State, Gonzaga and Michigan. Virginia downed Auburn, Purdue and Oregon over their past three games, though they barely survived their last two. They bested Auburn by a single point and went to overtime against the Boilermakers.

Texas Tech is a third seed while Virginia is a top seed.

Jarrett Culver has led the way for Texas Tech, with 18.6 points-per-game over the course of this past season. He’s also averaged 6.3 rebounds a game. Virginia has had more of a committee with their scoring. Kyle Guy, Deandre Hunter and Ty Jerome average 15.2, 14.9 and 13.5 points per game, respectively.

Below is all you need to watch the finale of the Big Dance.

How to watch the NCAA Tournament National Championship game